Now things get a little confusing.

Even at the time of the song, “Openshaw” was named Gorton & Openshaw (1906).  It was renamed simply “Gorton” in the late 1970s.  It never closed and so, whilst you will not find “Openshaw” in any timetable or list, the station that the lyrics refer to is still going strong today.

The current station was opened by the Great Central Railway and replaced an earlier version 200yds along the line that had existed since 1842.  It is situated a few miles out of Manchester on the old GCR route that used to head out towards Sheffield via the famous Woodhead Tunnel.  The tunnel closed in the early 1980s and today the line is truncated at Glossop and Hadfield.

Gorton is the second of three in the song that are in Lancashire and the second mentioned that never actually closed. 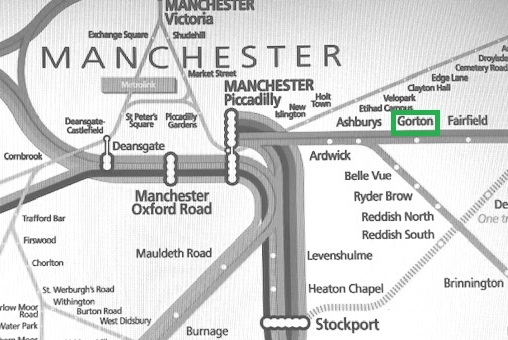 Back in 1962 the station was served by half-hourly electric trains linking Manchester Piccadilly (7 minutes) with Glossop and Hadfield (30 minutes) and once an hour by a service that headed via Guide Bridge to Rose Hill Marple (25 minutes) and on to Macclesfield (45 minutes).

Today, the Hadfield electric trains still pass through the station but now most do not stop.  So, for most of the day Gorton relies on diesel trains that still travel via Guide Bridge and as far as Rose Hill Marple. The line beyond there to Macclesfield was closed in 1970.  The service is now half-hourly; journey times are largely unchanged over 60 years.

Our journey began at Guide Bridge waiting for a service that had originated in Rose Hill and was heading, all stations, back into Piccadilly.

When it arrived, I was glad to see part of it was formed by a “Pacer” diesel unit.  These infamous trains, often found in the north, were hated by the travelling public, and became a symbol of the north-south divide in rail comfort and quality.

Nevertheless, there is certainly a bit of nostalgia about them and as they are finally being withdrawn, riding on one is becoming a rarity.  In fact, they were all supposed to have already disappeared at the beginning of 2020, but they have been given a stay of execution on account of the need for more capacity during the COVID-19 crisis. 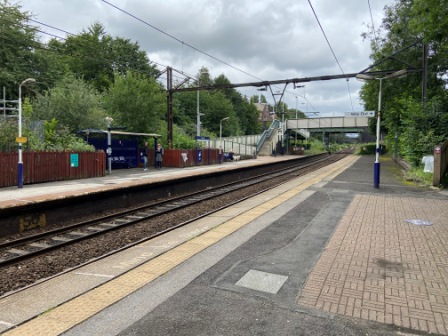 A few minutes later we were standing on Gorton Station.  The station was basic and unmanned. There was a shelter on both platforms and electronic information boards.  We had a quick look around and then made for the exit.

The area around the station was once home to two separate locomotive works.   They are shown in this photograph,  part of the “Britain from above” series,  taken in 1947 and looking east.

Gorton station (C) is near the top of the picture and the factories were located just to the west of it.  On the north side of the tracks (highlighted in red) was “Gorton Tank” (A), opened in 1848 by the Great Central Railway and eventually passed to successors LNER and British Railways.  The factory constructed, maintained, and even scrapped locomotives until its closure in 1963.  Today the site is occupied by New Smithfield Market.

On the south side of the tracks was the separate “Gorton Foundry” (B) owned by the “Beyer Peacock” company.  It was co-founded in 1854 by an ex-employee of Gorton Tank: Richard Peacock.  It produced steam, and later diesel and electric, locomotives for Britain and the rest of the world. 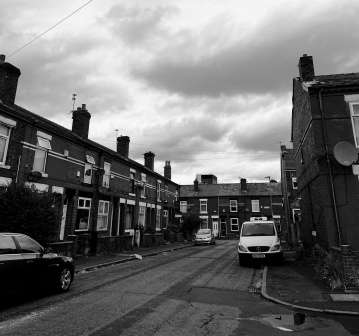 The decision whether to explore Openshaw, north of the tracks, or Gorton, south of the tracks, was an easy one to make.   I happen to have a family connection with Openshaw and I fully intended to come back a few months later and spend more time exploring it.  Today would be Gorton’s turn;  so, we started to walk south along streets of Victorian housing towards Hyde Road.

We reached Hyde Road and visited the Brookfield Unitarian Church where Richard Peacock (1820-1889) is buried in the impressive Peacock Mausoleum. 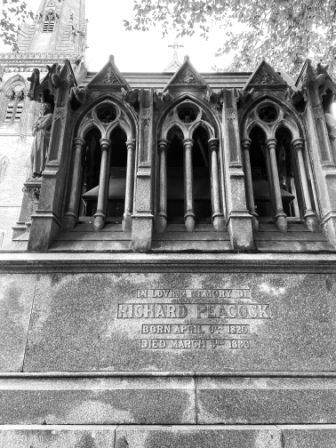 The name “Beyer Peacock” can still be seen on many preserved locomotives around the world.  The company was particularly successful in exporting to Australia and South Africa and specialised in “Garratt” Locomotives for hauling heavy trains. 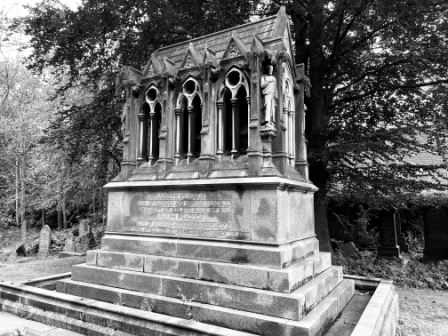 As well being a famous industrialist Peacock also became a Liberal Party MP and is still commemorated locally.  We walked down “Peacock” Grove to Sunny Brow Park and whilst there we had a look at the “Peacock” commemorative tree.

We finished our trip with a walk through nearby Debdale Park and down to Gorton Lower Reservoir. The park was quite impressive and was full of people enjoying their afternoon walks.

Sitting near the water’s edge the scene looked deceptively rural.  It was easy to forget that Gorton, let alone the rest of Manchester, was just a short walk away.