Trouble House Halt (1959-1964) is the first of two stations in Gloucestershire to be mentioned in the song.  It was located on the Tetbury branch line that went west from the Cheltenham to Paddington main line at Kemble.

It was open for the shortest period of any station in the song, it was also the only one that was opened and closed by the same company (British Railways) and it is the only English station ever opened specially to serve a pub!

In 1959 BR decided to try to cut losses and revive falling revenues on its branch lines by deploying small railbus trains.  These four wheeled one carriage trains were manned by conductors with bus-like ticket machines. On the Tetbury branch it was decided to open more stations to encourage traffic and so the idea to open a small wooden platform, just long enough to accommodate one carriage, opposite the Trouble House pub was born.

Revenue increased slightly but not for long, and it was not enough to help the line escape the Beeching Plan.

Ironically, the railbus idea was reborn more successfully as the “Pacer” train in the 1980s whilst Community Rail Partnerships have sponsored pub crawls by trains around the country for several years now.

The X on the map shows the approximate location of the station in relation to the current British railway network.  The nearest open station is Kemble 5.4 miles to the east.

In 1962 the Tetbury branch line saw about 8 trains a day at roughly 2 hourly intervals.  Kemble was a 17-minute ride from Trouble House and Tetbury could be reached in 7 minutes.  The last train of the day from Tetbury was as early as 7:30pm but it would have given enough time for a few pints at the pub before the last service back to Tetbury at 9:30pm.

Today an infrequent bus service links Tetbury and Kemble in around 35 minutes.  There are no plans to revive the line.

The Trouble House Pub was hard to miss on the A433. Heading in the direction of Tetbury there was a small layby, almost opposite the pub. A footpath led off the road at a right angle and was signposted from the layby. 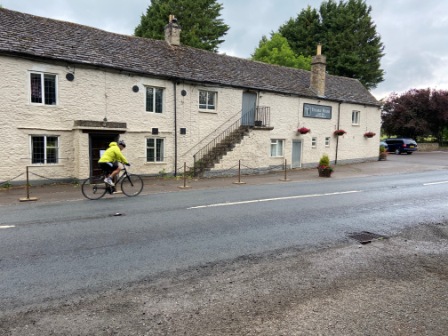 The footpath soon intersected with the old track bed of Tetbury Branch, now surrounded by dense woods, running in parallel with the A433.

There was nothing left of the halt itself.  Although, given that it was never much more than a few planks of wood next to the track anyway, perhaps that was not too surprising.

The pub itself was open though and so we decided to get a table for lunch.   It had just been taken over when we visited, and the new owners were just getting used to everything.  Nevertheless, we had a wonderful meal accompanied by some lovely Cotswold Uley Ale.  The pub doubles as a café so homemade cakes and coffee are available throughout the day too.

Venturing a bit further afield, we followed the “formation” of the old Tetbury branch, which was still quite visible for much of its route, eastwards.  Before Kemble it passed to the north of Cotswold Airport.  We went down the road to the airfield and spotted old bridge abutments still in place there. 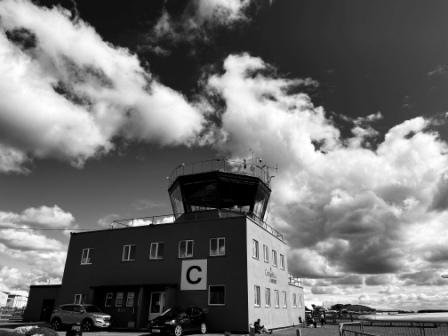 Cotswold Airport is a private airfield, but it is also the home of Air Salvage International: specialists in aircraft decommissioning.  The company has dismantled hundreds of civilian airliners over the years.  It was possible to drive onto the airfield and we made our way around to a little car park and viewing area.

As well as a live private airfield with Cessna’s landing and taking off, there was an old Folland Gnat in Red Arrows livery. The famous aerobatic team used this place as their base until 1983. 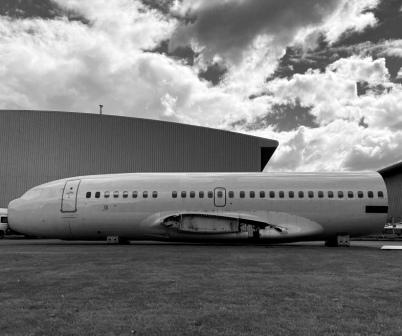 There were also several large airliners in various states of being broken up and they included at least four British Airways 747s: recent victims of the COVID 19 crisis. 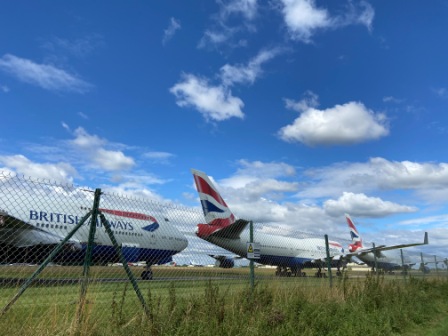 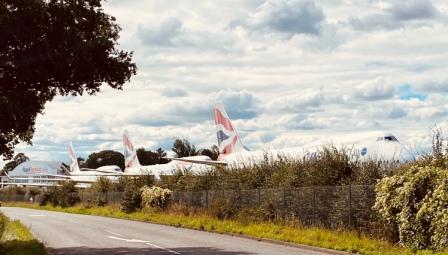 We drove north from the airfield and kept the transportation theme as we visited the southern end of the Sapperton canal tunnel, which was first opened in 1789.  The portal, which features a Georgian design, is often claimed to be the most beautifully decorated canal tunnel in the country. 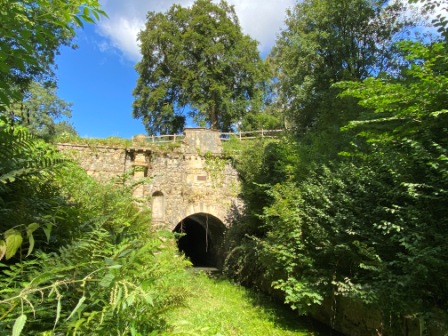 Sadly, the tunnel is blocked by two rock falls and the Severn to Thames Canal is severed and not even in water at this point. There are plans to clear the blockage and eventually restore the connection.

Back at the pub  there was the start of a cycle path called the Tetbury Trail.   It follows the old track bed.  Now it just leads the short distance from Trouble House into Tetbury, but it is hoped that one day it will reach all the way back to Kemble.

We followed it into Tetbury.  As it arrived in the town the trail passed the old goods station.  The building has just been renovated and has been reopened as an innovative arts centre: “Tetbury Goods Shed”. 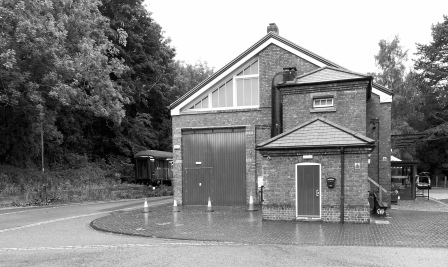 There were plenty of explanation boards outside with a lot of information not just on the centre itself but on the history of the little branch line too.  There were also photographs of the old passenger station that stood just further up the track too, although sadly nothing of it remains of it today.

The building also housed a cafe: the “Whistle Stop”, and although it was closed on our visit, it is possible to eat and drink in an ex-Finnish State Railway Carriage brought in for the purpose.  Certainly, it is an interesting touch!

From the Goods Station, we set off on a short walk into Tetbury town centre on a route that led us down “Chipping Steps”, a charming little street lined with 17th century weaver’s cottages. 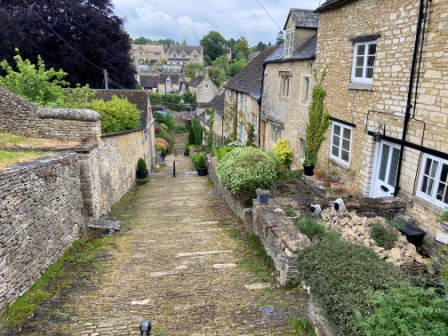 We spent a few moments reading the tourist information board in the town centre.  It claimed Tetbury was a Cotswold town of great architectural interest and it remains today substantially the same as it was in the 16th and 17th centuries when it was a very prosperous wool town. 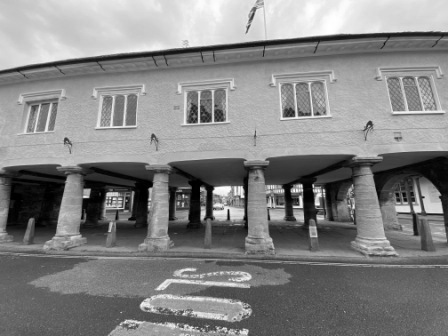 Right at the centre was the quaint Market House. It was built in 1655 and is supported on three rows of stone pillars.  It was designed for the sale of wool and yarn and it is still used to host farmers’ markets today.

Also, worth taking time to explore was the beautiful St. Mary’s Parish Church. It was built in the gothic revival style and has an unusually large nave. 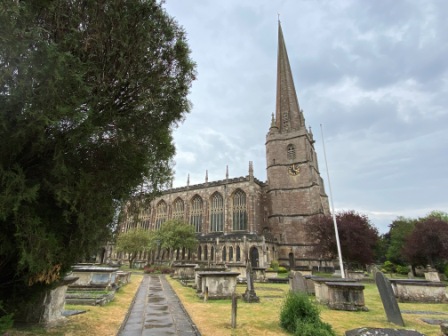 Apparently, Tetbury is also well known for its wonderful range of antique shops and they attract many visitors every year.  It certainly had a pleasant atmosphere to it. 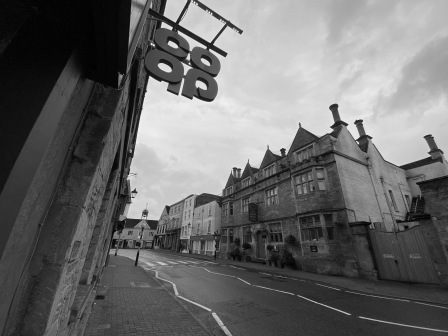 As we finished our walk around the town, I could not help wondering that if Prince Charles had lived nearby in 1964 the railway might have been saved.  It is a shame the royal train never got to stop at Trouble House Halt!