Not long after I went down to live in Yamaguchi I made a three-week trip by myself to the Philippines.

I travelled there on quite a strange collection of airlines. None of them were Asian. From Tokyo to Hong Kong I flew North West Airlines, I went to Manila on Lufthansa and then finally back to Japan on a Canadian Airlines DC10.

During my stay in Hong Kong I managed a trip out to Macau on the Hydrofoil and added that to my list of places visited. Macau then was not the gambling Mecca it later became, but there were already a few little casinos here and there. It was certainly different from Hong Kong. I thought it was quieter and poorer. It obviously had a lot more Portuguese influence.

The Chinese food to be seemed the same as Hong Kong, so I decided to go to a Portuguese restaurant for something different. It wasn’t bad actually; I had a pretty authentic meal of soup, sardines and custard tarts.

The Lufthansa 747 to Manila was half empty. It was basically providing an extension to a Frankfurt to Hong Kong flight. Most people had already alighted in Hong Kong and had been replaced by only a few people like myself.   The service and the food were excellent though and it seemed a little weird to be enjoying German hospitality between two Asian cities.

I stayed in the centre of Manila for a couple of nights and then caught a train south to Legapzi. I spent a bit of time there before making my way by ferry and bus slowly down through Masbate to Cebu for another night or two. Then I turned west and headed again by bus and ferry to Negros, Panay and finally to Boracay. After almost a week on this “backpacker’s island” I flew back to Manila for a final few nights. 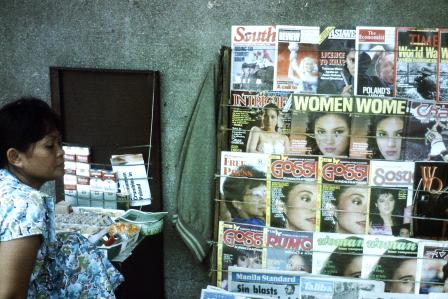 Transportation in the Philippines was quite interesting. The train journey I took was mostly overnight and in a very uncomfortable and crowded day carriage. I think even if I had been in a sleeper I wouldn’t have slept as the track was much too rough. The railway threaded through the streets on the way out of Manila and passed through some of the poorer downtrodden areas as it did so.

Then there were the famous colourful Jeepneys in the towns. They were great for taking short rides here and there.  I had a lot of fun taking them around the streets of Manila.  There was certainly quite an atmosphere with everyone huddled up in the back. 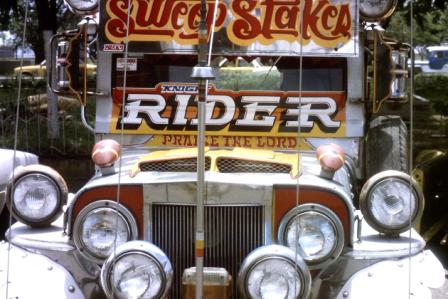 The ferries in the Philippines were infamous for their accidents. Most of the ones I took seemed fine, but there was one crossing to Cebu that worried me. I could tell from the painted-over Japanese writing that the boat had been a short-distance car ferry in Japan, yet here it took us quite a way out to sea.   The fact that it seemed to have a little bit of a list didn’t inspire me with confidence either. I stayed on deck next to the life belts the whole trip and I was glad to get off.

I caught an ancient Philippine Airlines BAC 1-11 on the way back from Borocay to Manila. As it took off I was suddenly drenched in water. It was raining outside and first I thought the plane was leaking and I panicked. It was actually a faulty air conditioning unit. I calmed down but sat there in wet trousers for the rest of the trip.

A few days later I almost had wet trousers of a different kind when the Lufthansa 747 landed back at the old Hong Kong airport in a  pretty violent thunderstorm.

Of all the South East Asian countries I visited in the 1980s I enjoyed the Philippines the least. I think that a lot of my negative impression came from the fact that the place seemed both to be very Americanised yet very poor at the same time. It felt almost as if it had suppressed its own culture to be more like Uncle Sam but didn’t really have the wealth to go with it. 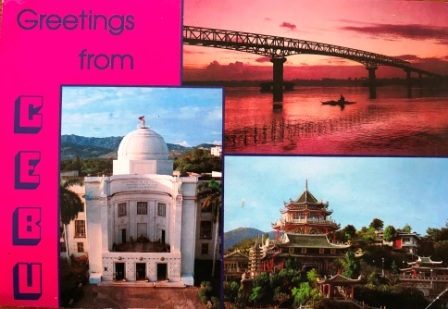 I also hated the fact that there were security people with machine guns everywhere. If you went into the bank they were standing outside in twos or threes. I didn’t feel threatened but it didn’t really make me feel exactly safe either.

That said, I didn’t have any bad incidents at all. Although on my final day at the Airport a policeman approached me and asked me to accompany him out of the building. I followed him feeling a bit apprehensive.  When we got outside he offered to sell me his police badge for $5. I politely refused and felt really glad to be leaving. 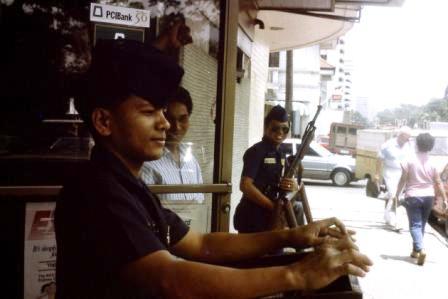 I am almost ashamed to say it, but I liked Borocay the best. It was touristy as hell but it was a pleasant place to hang out for a week. It was pretty much the same set up as Koh Samui in Thailand and countless other places in Asia.

There were lines of little huts to sleep in on the beach and they were gathered into groups around restaurants that served typical backpacker cuisine: fruit shakes, omelettes and burgers.   The clientele were mainly all young American, Canadian, Australian and British. 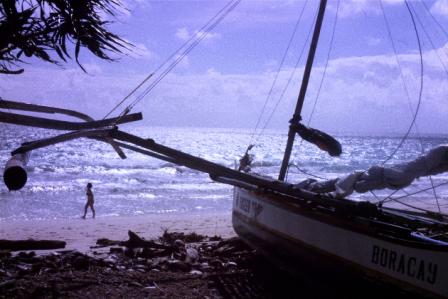 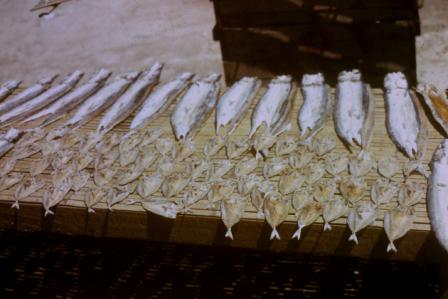 I checked into the Trafalgar guest house for 6 nights and spent them relaxing on the beach, walking around the island, eating and drinking. The Filipino people here were the friendliest I met. Perhaps that is not surprising given the industry they were in. The food was excellent; they had all the backpacker stuff but they had great versions of the Filipino classics like Pork Adobo and Lumpia too. 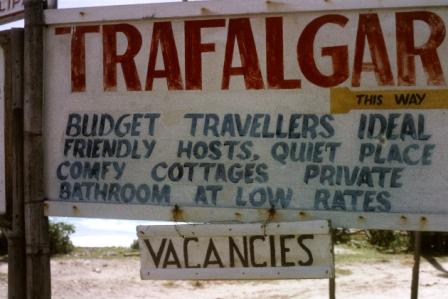 My immediate neighbours in the next hut were a young Welsh couple, Cathy and Clive, who had studied catering in Cardiff and were touring Asia before heading home to try to open a restaurant. In the next hut along there was Ann who was from London and who was teaching English in Hong Kong. We all got on really well and hung out a lot together over the week. 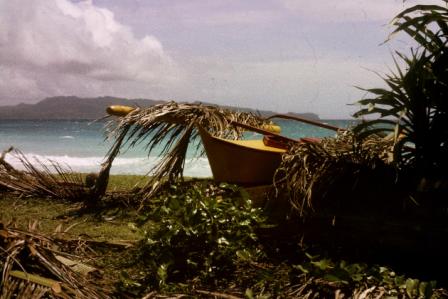 On the third day of our stay Clive told us that it was Cathy’s birthday and he wanted to surprise her by making her favourite lemon meringue pie. The plan was that Ann and I would distract Cathy whilst Clive made the pie in the guest house kitchen. The landlady thought the plan was a great idea and agreed to help. 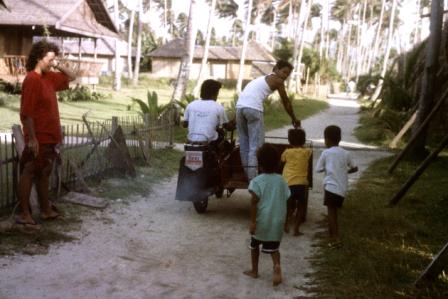 Then we hit on a snag; there were no lemons on Borocay.   Ann and I spent all morning looking but the best we could find was Calamansi. It was not quite a lemon and not quite a lime.   It didn’t matter though. The look of joy on Cathy’s face when Clive presented the “Calamansi meringue pie” was pretty special. It didn’t taste bad either.

I had another friend on Borocay as well. 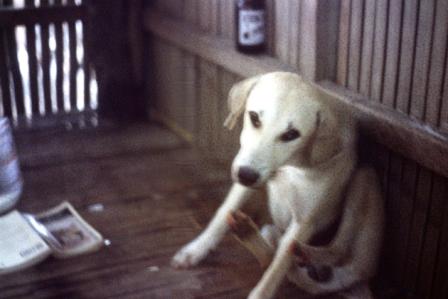 There was a stray dog that hung around the Trafalgar. This was probably because the landlady fed him scraps and stuff.   For some reason he attached himself to me. For almost my entire stay he followed me (and only me) around. Cathy, Clive and Ann tried to win him over, but he wasn’t interested in them at all.

I named him “Dog” or more formally “Come on Dog” as I figured he might have been called that before. It seemed to work and he would respond to it whenever I called him. 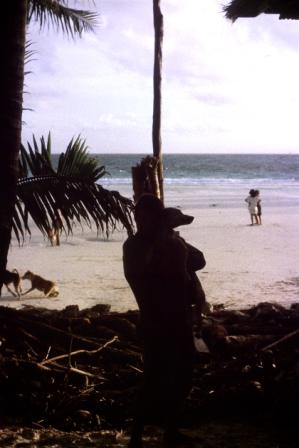 We grew closer as the week went on and we ended up going for walks together, running in the ocean spray together and playing with sticks and balls together. He slept on the floor of my hut every night too.

I had never had such a loyal friend as “Dog” and I haven’t had once since either. Our parting at the end of our trip was very emotional. One of us actually cried. He looked pretty sad as Cathy held him and he watched me get into the boat that was to take me off the island. 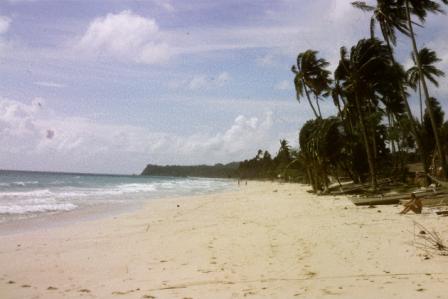 I tell everyone that the Philippines is the only place I have been that I have no interest in returning to.   Perhaps that is a little unfair. Perhaps I should give it another go one of these days.   There may be another four-legged friend waiting for me there.