“No one departs, no one arrives….

For me, this is the most moving part of the whole song: it conjures up images of train crews, worried for their jobs, pulling into stations and seeing no passengers at all.

As the COVID-19 crisis continued through 2020 and ridership of the railway network fell rapidly and remained extremely low, it was very easy to imagine just how it must have been in the early sixties too.

There were certainly very few passengers around on the day we visited Selby station.

Selby (1834) is the first of four stations in historic Yorkshire to be mentioned in the song. It was first opened by the Leeds and Selby railway almost 190 years ago and is the oldest of all the station sites mentioned in the lyrics. Around 650,000 passengers used it in 2018/9.

Among the services that stop at the station are those of “open access” operator: Hull Trains. When we visited, they had just restarted operations between Hull and Kings Cross, on a limited basis, after suspending everything during the COVID lockdown.

Until the early 1980s Selby was on the (Kings Cross to Edinburgh) East Coast Main Line. The “Selby Diversion”, which now takes the trunk route west of the town, was opened because the National Coal Board wanted access to land that crossed by the original line north of Selby for mining.

The mine operated for around 20 years and is commemorated in an unlikely place; one of the last pieces of coal ever dug from the mine was on display in the magnificent Selby Abbey, just around the corner from the station. 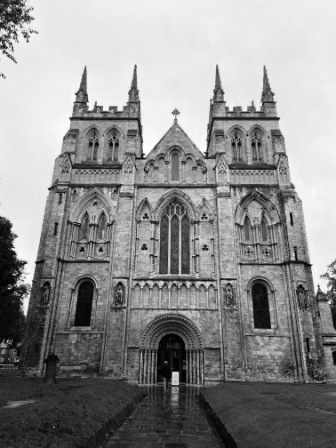 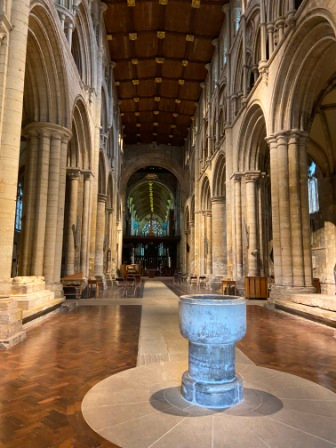 The abbey had only recently reopened to visitors after lockdown, and we felt quite lucky to be able to get inside.  The volunteers were very welcoming and only too happy to explain features of the 950-year-old building to us, not least the fabulous St Germain Window in the north transept. 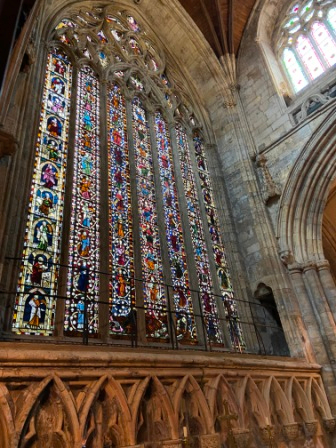 The most famous stained-glass window at Selby Abbey is in a less prominent place though.  On the side of the nave, easily overlooked, is the Washington window. Based on the family crest of George Washington; it is thought to be the inspiration for the US “Stars and Stripes Flag.

We went out of the church, browsed for a while in the wonderful local department store, Wetherell’s, and had a coffee in their little café.   We then had a good walk around the town centre.  It was a great little place with a nice “market town” atmosphere.

It seemed to be quite busy but one shop keeper we spoke to told us about the way the council were cordoning off streets to create extra space on the payments for pedestrians during COVID.  “They put the signs up saying the street is closed but they forget to mention that the payment is still open, so no one is coming past”, she complained.

As we completed our circle back to the station, my mind went back to the song.  It changes tack here and instead of listing individual stations, it now names two pairs of stations. Neither of the first pair, Selby and Goole, was ever cited for closure; it was the direct line between then that closed.  “From Selby to Goole”. 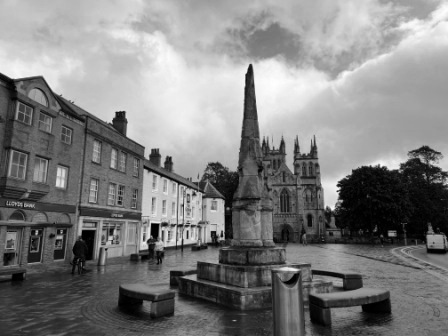