The song ends with the names of four more stations read out one after the other; the first of them is Cockermouth (1865-1966).

Situated in the English Lake District, Cockermouth is the northernmost station mentioned in the song and the only one in Cumberland (now Cumbria).

The station was built by the Cockermouth, Keswick and Penrith Railway who worked in conjunction with the Cockermouth and Workington Railway to provide a link from the West Coast Main Line at Penrith to the Cumbrian Coast Line at Workington.   Both companies were later absorbed into the London North Western Railway.

The line from Workington to Keswick, including Cockermouth, was cut in 1966. Services between Keswick and Penrith continued until 1972.

The X on the map shows the approximate location of the station in relation to the current British railway network.  The nearest open stations are on the Cumbrian Coast Line at Aspatria and Maryport, both of which are around 6.5 miles away.   Penrith, much more useful for connections to the south, is around 30 miles away.

The approximate position of Cockermouth on the line from Penrith to Workington is shown in red.

Back in 1962 the station saw about 6 trains a day in each direction on a weekday but had no Sunday service.  A trip east to Penrith took about 1 hour and the journey west to Workington was around 20 minutes.

Today’s bus service is much more frequent, with a twice-hourly service to Workington (20 minutes) and hourly buses to Penrith (85 minutes).

There have been numerous plans to reopen the Penrith to Keswick section of line since 1972 and, as of 2021, it still seems possible they may one day succeed.  The line through Cockermouth is likely to remain closed though.

On its way from Keswick, the main A66 uses much of the old railway formation.  As we drove along the road, we were able to see the kind of views that a passenger arriving in the town from the east would have seen out of the train window.  The bit around the western side of Bassenthwaite Lake was particularly pleasing; in fact, the whole train journey must have been quite a scenic ride.

The trunk road bypasses the town itself leaving the route of the former railway alone, but some of the old line is used as a cycle track on the eastern outskirts. The area around the station has been largely transformed and is unrecognisable. We stood on the former site of the railway bridge on Station Street, still one of the main roads in the town, but it was almost impossible to imagine what had once been there.

Further down Station Street a war memorial that was once at the entrance to the old Cockermouth Station still stood, but the former railway site had been completely cleared and new structures created. Among the new buildings that replaced the station were the Cockermouth Mountain Rescue HQ and a fire station.  The fire station has since closed and the area, now “the Sidings” is in the process of being redeveloped again.

Cockermouth (population: 8000) lies just outside the Lake District National Park and is an important regional centre.

The town grew up around the spot where the River Cocker met the River Derwent; both rivers became a source of power for mills that turned the wool from Lakeland sheep into cloth.  Waterpower transformed Cockermouth into a small industrial centre in the 18th and 19th centuries and many of the town’s buildings survive from that time. 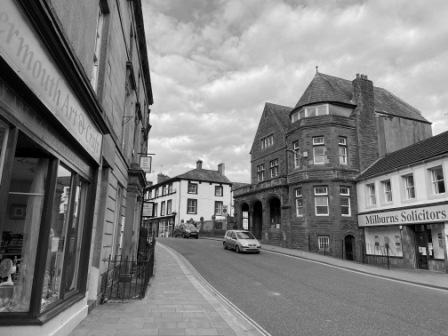 We continued along busy Station Street before turning onto Main Street.  It was another a vibrant little street with lots of shops and restaurants.  A lot of the stores were independent too, with less chains than many modern high streets. 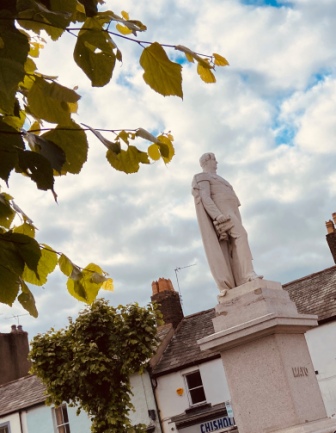 There were quite a few memorials to the town’s heroes and villains; we saw the house where poet William Wordsworth was born, stopped to look at a large statue of former local MP (the 6th Earl of Mayo) and passed in front of a pub named after Fletcher Christian, the famous mutineer of the HMS Bounty.

We continued our little exploration with a stroll past the pretty multi-coloured Georgian Houses on Kirkgate and Market Place.

For dinner, we got some excellent fish and chips from a shop on main street and then ate them in the little park where the two rivers met.  Afterwards, we walked along the opposite bank of the Derwent towards the impressive, still privately owned, Cockermouth Castle.

There was a large flat area of grass next to the river and quite a few people were sitting around enjoying the early evening sun. I must admit that we were quite impressed with the town; it seemed like an excellent,  if a little quiet, place to live.

On the way back from the river we passed by the famous Jennings Brewery, before heading to one of the local pubs to try some of their “Cumberland” golden beer and chat to a few locals.

Although the words “For Buttermere” were added in the Beeching Report, and are therefore mentioned in the song, they were never part of the official station name; they usually appeared in timetable footnotes.

Buttermere, a small lake now owned by the National Trust, is about 10 miles to the south east of Cockermouth; it took us about 30 minutes to drive out to it.  We parked the car at the Gatesgarth end and then made a complete circuit of the lake on foot in about two hours.  The walk around Buttermere was fabulous and included a trip through a rock tunnel on the shoreline. 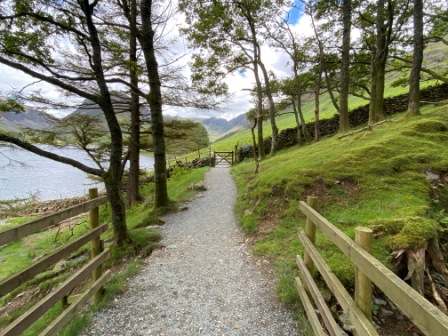 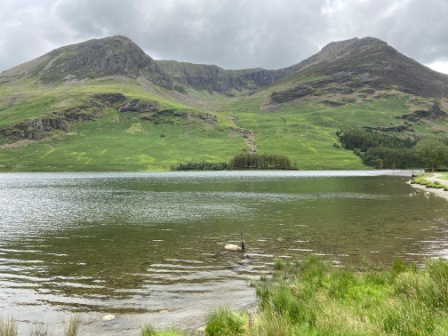