“On the Slow Train

We reach the end of the song and there is a very appropriate choice of station to finish with to give a strong impression of finality. Windmill End (1878-1964) is in the West Midlands conurbation to the west of Birmingham and close to the town of Dudley.  It is the second Worcestershire station to feature in the lyrics.

It was on the delightfully named “Bumble Hole Line”, a short branch that was opened by the Great Western Railway between the “South Staffordshire Line”  at Blowers Green and the Worcester-to-Birmingham line at Old Hill.   Interestingly, the little line had two other candidates that could have been used at the final point in the song; Darby End and Baptist’s End were either side of Windmill End; they all closed on the same day.

After 1964 the Worcester-Birmingham line through Old Hill remained open but all passenger services on the South Staffordshire line, including the busy station at Dudley, were cut.  The line is currently mothballed, but plans are afoot to reopen it to freight traffic.

The X on the map below shows the approximate location of the station in relation to the current British railway network.

The diagrammatic map below shows the area in more detail.  The Dudley Port to Stourbridge Junction section of the mothballed South Staffordshire line from Walsall has been added and is shown in orange.  The line from Wolverhampton that met it at Dudley Station is also partially shown.

The Bumble Hole branch from Blowers Green to Old Hill is shown in red.  The approximate position of Windmill End is marked by X.   Old Hill, about 2 miles away, is currently the nearest open station.

Trains on the branch line usually provided a shuttle service between Dudley and Old Hill but they were never particularly well used.

In 1962 a ride to Dudley took 8 minutes whilst the journey to Old Hill was just 6 minutes.  The service was built around local industrial workers and on Mondays to Fridays it featured just 3 trains in the morning and 5 in the evening with nothing in between.  At a time when factories still worked a five-and-a-half-day week, there were just two pairs of trains on Saturdays, with the final service around midday.

Today, Windmill End can be reached from the centre of Dudley by a 10-minute bus ride and a 7-minute walk.

Work has also now commenced on a project to bring the successful Midland Metro (which already uses the old track bed of the old GWR Birmingham-Wolverhampton line) to Dudley soon.  It will use part of the old South Staffordshire line through the town, and it will pass close to Blowers Green.

However, there is no hope for the Bumble Hole Line and most of it, including Windmill End, has already been completely obliterated.

This was our very last visit to one of the station sites. We had started at Mumby Road back in May 2020 and, notwithstanding all the enforced breaks for three different lockdowns, had visited stations every month or so but in no order. 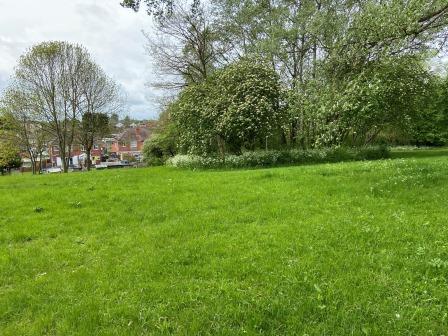 About halfway through the project, we decided that the last one in the song should also be the last one we visited.  In May 2021, more than a year after we begun, we arrived at Windmill End.

Using a mixture of old and new Ordnance Survey maps we managed to find the site where the station would have been.  Finding it was easy but there was nothing to see there at all.  It was extremely hard to imagine that a station had ever been here.

Using the maps, it was just possible to locate and  make out evidence of two railway bridges that crossed two branches of the Dudley canal as the line approached the station from the north.

We found a few clues on the tow path and  the remains of an old bridge abutment that once carried the line.  Compared to most of our other station visits though, it was very slim pickings. 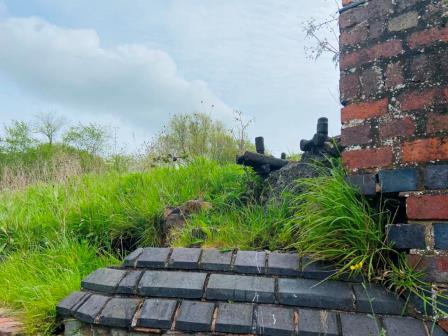 Today, Windmill End is a quiet spot in the town of Netherton on the outskirts of Dudley.  The area here is known as the Black Country (roughly made up of the towns of Dudley, Sandwell, Wolverhampton,  and Walsall) and is, probably, so named because of all the smoke that its many furnaces once made.   The area was famous for producing  nails, boilers, chains, and anchors; the local Netherton firm of Noah Hingley made the anchor for the Titanic. 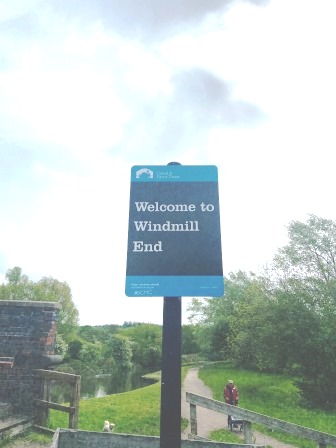 We went for a little wander around. Most of the houses in the street (itself called Windmill End) behind where the station used to be looked modern, but the street itself was not.  Back in the 19th century the whole area around here would have been a mixture of factories, boatyards, coal mines and furnaces.  There was no sign of a windmill. 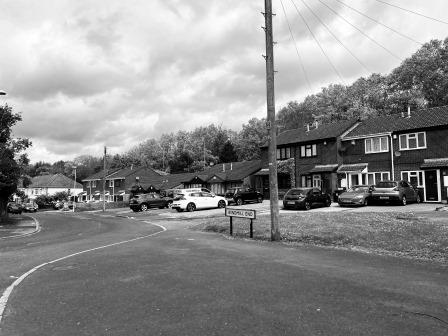 The canal system is still a dominant feature here and Windmill End is at a junction of two branches of the Dudley canal. One branch used to lead south towards Selly Oak; the other went through the Netherton tunnel in the direction of Birmingham. 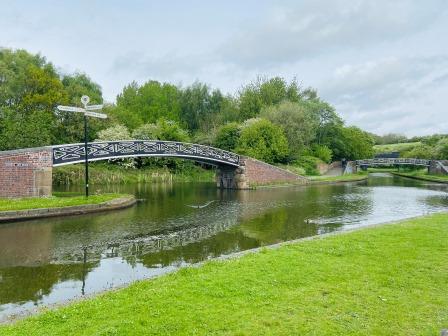 We walked up to the mouth of Netherton Tunnel.  It was opened in 1858 to relieve congestion caused by the narrow Dudley Tunnel (located further north) and was the last original canal tunnel built in Britain. 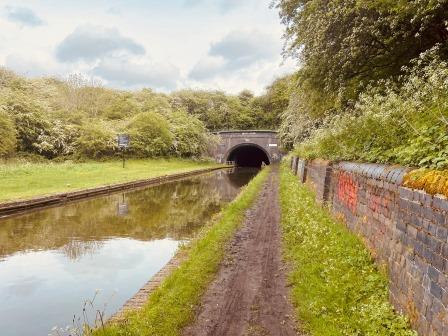 The tunnel is 1¾ miles long, but it is more remarkable for its width.  It has enough space to allow two boats to pass and it has tow paths on each side.  The Monarch’s Way, a long-distance footpath, still goes through it and, although there is no lighting inside at all, it can be walked or cycled through. 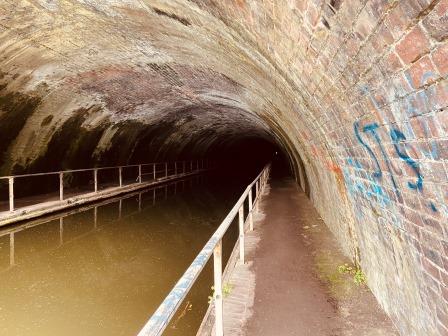 On higher ground close to the tunnel, we found the chimney and the remains of the Windmill End Pumping Station.  The building, better known as Cobb’s Engine House, was completed in 1836, and sat over a shaft of more than 500 feet. 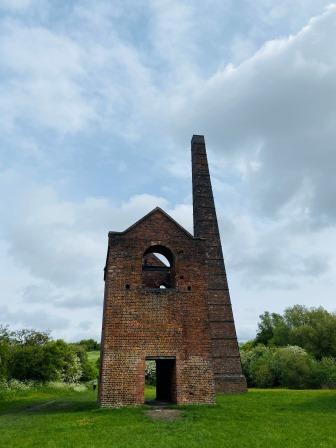 The Newcomen steam engine inside the building used to pump water up from a coal mine below and deposit it into the canal.  The engine was removed back in the 1920s but the  building itself is now listed as a Scheduled Ancient Monument.

Back at Windmill end junction we watched as a couple tied up their barge by the side of the canal.  It was all very tranquil. If we had been standing here 100 years ago, we would have been surrounded by the sights, smells, and sounds of industry.   There would have been boats full of cargo passing furnaces, workshops, and forges; the air would have been full of smoke from all their chimneys.  Standing by the canal, it was difficult to imagine that scene.

A visit to the nearby Black Country Museum made it a lot easier. 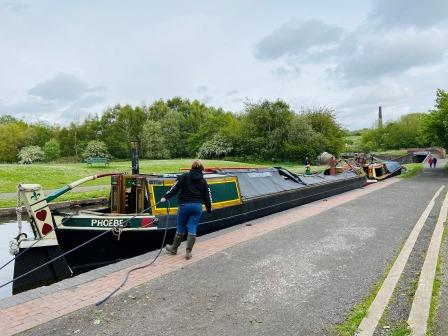 The Black Country Living Museum is about 15 minutes’ drive north of Windmill End. It is built on land reclaimed from an old railway goods yard that also encompasses former coal mines and a lime kiln. 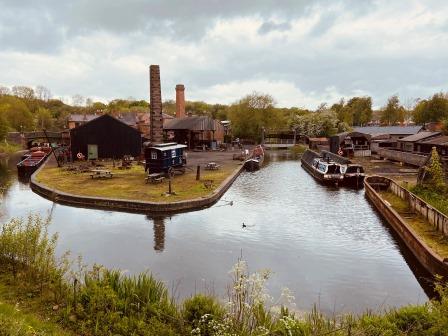 Many old buildings, residential and commercial, have been relocated from original sites around the Black Country to create a whole town.  Each building is “set” at a slightly different year between 1850 and 1950.  The enthusiastic staff, dressed in period costume, provide demonstrations of the crafts like nail making and chain production that once dominated the local economy.

The Dudley Canal with the original Dudley Tunnel (even longer than the Netherton) is adjacent to the museum and a basin from it runs through the grounds. There are also trolleybuses and trams operating around the site too to complete the picture.

We spent a fascinating 4 hours wandering around the whole place and found it a wonderful way of ending our final journey to the stations mentioned in the song. 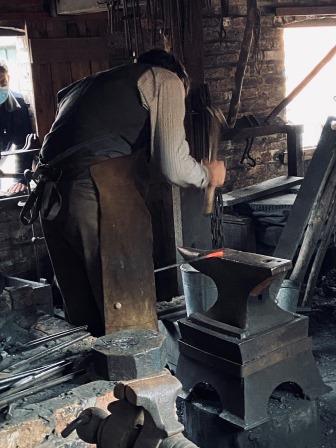 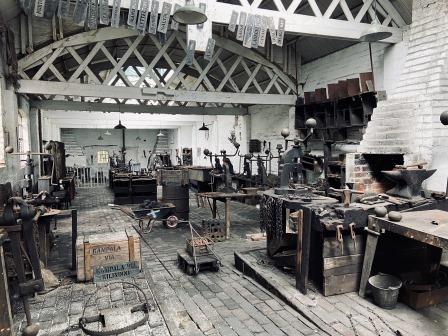 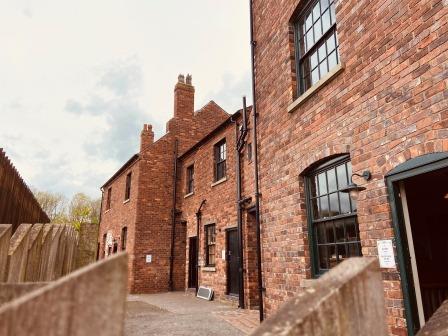 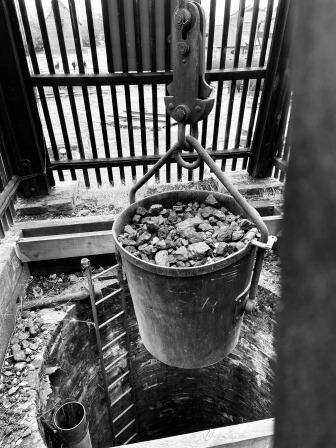 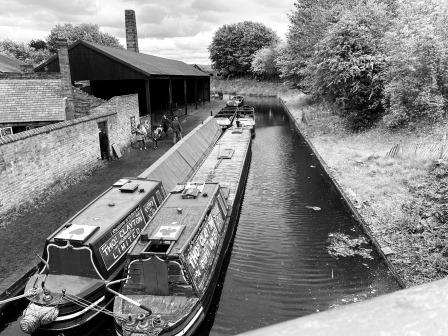 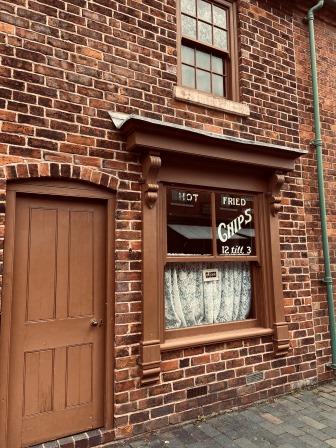