It goes without saying that back in 1986 the world was quite a different place than it is today.   The cold war was still in full swing and, although Gorbachev was already President of the USSR, there was little sign it would be ending any time soon. In the west Ronald Reagan and Margaret Thatcher’s special relationship was growing stronger. Thatcher was on course to win the 1987 election and Ronald would make his famous “tear down this wall” speech in Berlin the same year.

The cold war meant that many countries that are very easy to travel to today were a lot harder then. Eastern Europe was difficult without a complicated visa process in advance and places like Vietnam and Cambodia were essentially off limits.   Hong Kong was still British but comparatively few people ventured beyond it into China.

The UK that I was leaving was still recovering from the recession of the early 1980s. The effects of the upturn were more marked in the south than the north, but they were still small green shoots of growth rather than the “Lawson Boom” they eventually became.

Yet, the speed at which one could travel around the world back in the 1980s was not too different to what it is now. The changes in speed over the last 30 years have not been great at all. Especially If you compare them to the changes that occurred over the 30 years before 1986. In 1955 the jet age was still in its infancy and more people had crossed the Atlantic on ocean liners than in aeroplanes. If you consider the demise of Concorde you could say that speed has actually decreased since 1986.

By 1986 most of the long-haul air routes were operated by the first generation wide-body jets that had come into service in the mid 1970s. There was the 747, the DC-10, the Lockheed Tristar and the very first Airbus; the A300. Aircraft back then were a little nosier than today and they didn’t have quite the same range as they do now. Trips like London to Tokyo were still impossible without a fuel stop somewhere.

Many of the airlines that operated back then are still around today, but I travelled on a few that aren’t, including North West, People’s Express and the much missed British Caledonian.

The flight sectors tended to be shorter but the frequencies were lower too and that meant fares were more expensive. Only careful shopping around at the specialist “bucket shops” like “Trailfinders” and “STA travel” guaranteed low prices.

Buying from bucket shops meant that you might not get your ticket until you actually arrived at the airport on the day of departure.  You would often have to turn up at a “tour group” counter in some obscure part of the airport with a letter and just hope they had your ticket.

Less security back then meant there was also a market in selling on tickets to others too.  The last time anyone looked at the passport and the ticket together was at the check in counter.  People could arrange to sell their unwanted tickets to someone else, travel out to the airport with them, check in and then hand over the boarding pass. They would be confident in the knowledge there would be no more identity checks until the final destination.

Smoking was still permitted on all flights and one had to specify things like “a non-smoking window” at check-in to guarantee a pleasant journey.

In-flight entertainment consisted of a film shown on a large screen in the cabin with a soundtrack that had to be listened to on vacuum head sets.  If the film wasn’t entertaining enough there was also the chance of visiting the cockpit and chatting with the flight crew to relieve boredom. (yours and theirs)

Flights always seemed to be a little less busy back then, there was often a little more legroom and the food, even in economy class, seemed to taste better.

In the USA and Australia the low cost flight system was still taking shape and the long-distance bus network was still the main option for the budget traveller.   Trains in most countries outside Europe were already very much a secondary form of transport. It cost much more to cross Australia or America by train than by bus. Railways were simply a form of luxury travel for those who didn’t like to fly.   In Asia the high speed train network that was to spread to Korea, Taiwan and China was still, in 1986, confined to Japan.

But the biggest difference between travelling in the 1980s and travelling now was not to do with the modes of travel themselves but with the information about travelling. In 1986 there was no internet and there were no mobile phones.

Back then it was impossible to research fares let alone reserve an airline ticket without visiting a travel agency in person.

It is almost inconceivable now, but one was almost totally reliant on guidebooks and word and mouth for recommendations on places to stay. I would often turn up in a new city clutching  pieces of paper on which other people I had met had written addresses of hostels or lodgings they had stayed in and found okay.

In 1986 guide books for the budget traveller had just started to become popular. The first “South East Asia on a Shoestring” Lonely planet guide had been published in the seventies and the company were gradually starting to extend their excellent guides around the (Lonely) world.   Like many, I depended on those guides in each country I visited. (in 2017 I still use them)

It was difficult to keep in contact with home too. International phone call costs were prohibitively expensive. One was restricted to sending an aerogramme and making every effort to fill the whole page before sealing it and sending it off.

One of the things that I missed most about home were the newspapers. Today I can access the on-line Telegraph or Guardian wherever I go, but back then access to even a two or three day old British newspaper was a precious and wonderful experience.

Without a mobile, ringing a hostel from an airport meant fumbling around for change and using a payphone. If you agreed to meet someone there was no way of contacting them if they didn’t turn up.   I often wonder how many more of the people I met along the way might have kept in contact had we been able to swap mobile numbers or e-mail addresses.

Another major difference was a very positive one. For a recent British graduate like myself there was no system of student loans. I had left university in 1985 with no real debts to pay off and, as I embarked on my trip in 1986, I had no obligations to return to find a job to pay off anything. I could be gone as long as I wanted to be gone; 1 month, 6 months or even, as it turned out, 8 years.

I decided to keep a diary of my travels. I bought 3 Black and Red notebooks from WH Smith and packed them into my rucksack.   I wrote about my experiences in them at least once a week for the next two years.

I wrote in a mixture of present tense and past tense and I collected stickers and postcards and added them to the diary.

I am now reproducing the diary I wrote then in its entirety. I have re-written it all into the past tense, but otherwise made very few changes.   I intend it to be an account of my impressions at the time and so I have not tried to add any additional opinions from 2017. 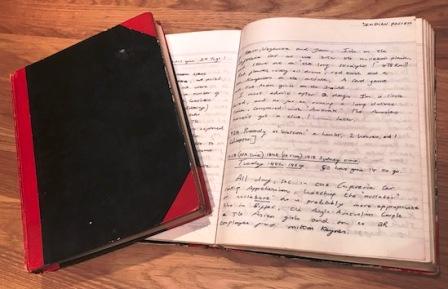 The diary starts at Gatwick as I was about to board a British Caledonian Flight to New York. I was 21 years of age and a graduate but I had never flown on an aeroplane before.   I had temporarily left the ground in a helicopter above the beaches of Normandy, but I was now about to step onto my first winged aeroplane

I had chosen the 747, the largest passenger aircraft then flying, as I thought it best to start with the biggest and work my way down.