After waking up and clearing up the tent at 6am we went straight to the coffee bar and then onto the visitors centre. It was raining and they were not allowing anyone to climb the rock in the rain. We buried ourselves in the trivia of the centre for over two hours. The rain finally stopped and we walked out to the rock itself.

It wasn’t hard to climb and, as long as you held on to the chain, it wasn’t dangerous. It was quite steep and it was very windy. Mark made it up in 29 minutes, I did it in 32, Didier in 33 and Tony lagged behind and did it in 35. The record we had learnt was 30 minutes up and down.

We descended slowly, spent some time looking at the caves at the bottom and then waited for the sunset to take some more photographs. 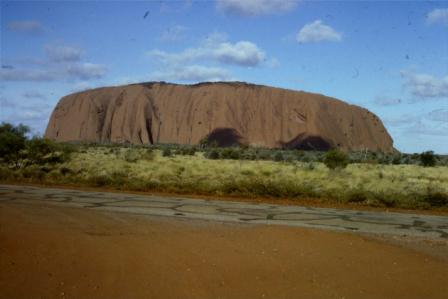 We opted to avoid the campsite fee again and spent a ridiculous 2 hours trying to make a pizza and an overpriced can of Fosters last until 10:01pm

We left at 6am having saved a total of $48 in campsite fees. Ayer’s Rock hadn’t made a lot of money out of us.

We headed to Alice Springs by way of Katatjuta and the Olgas.

We arrived at 7pm. Unfortunately we were not in time for the Youth Hostel to have any beds left. We went next door and secured accommodation in the Backpackers inn.   It was comfortable and warm there and I met two girls I had last seen in Nelson, New Zealand a couple of months before.

I checked out of the Backpackers and headed back to the cheaper Youth Hostel. It was more a group of porta cabins really but it was cheap.

Alice Springs was not at all as I had expected it to be. It was modern and functional. It had an impressive mall and even a drive-through Kentucky Fried Chicken joint.   I spent the morning washing laundry and going to the bank. Then filled a box with the souvenir boomerangs, koalas and kangaroos I had been collecting and took it to the post office to send home. 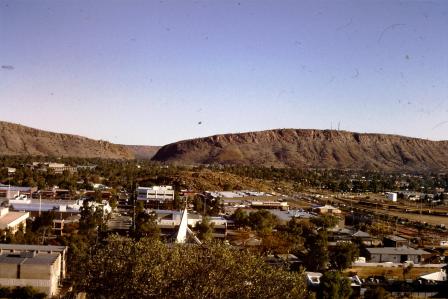 In the afternoon I had a look at the Telegraph museum and climbed Anzac Hill to get view of the town.

We splashed out on steaks for the evening as it was a special occasion. The crew were breaking up after two weeks. Diedier was hitching out to Glen Helen, Mark and Tony were going to head back south and I was going to carry on up North.

In the common room at the hostel I met Phillip from Fishguard in Wales. He was in a bit of a state. He was suffering from a dreadful cold, he was terribly upset about Wales losing to New Zealand at the rugby and he had just lost his job in Adelaide. He was now heading north to Katherine to find another job. I suggested we should try our luck hitching together.