I woke up very early.  Bill  and Mary took me to nearby Newark airport and said goodbye to me there.  I was grateful to them and to Kerry and Tanya for being such a wonderful “cushion” to land on in the USA.

Just after 6am I checked in two bags at the desk for the 7:00 flight to Boston and went through to the departure lounge.  The second flight of my life, and the second in just a few days, was going to be quite different from the first one.

It was on a People’s Express Boeing 727. It was a pay-on-board flight.  I was amazed by the fact that, even though I had already checked in 2 bags, as I walked on to the plane I hadn’t yet paid for a ticket.  I sat down near the front.  The flight wasn’t full at all and the two seats next to me were free too.

The pilot came on and announced we would be leaving on time and we were due into Boston at 8am.  We took off and then once when we had levelled off, the flight attendant finally came round selling the tickets.  I bought a one way ticket to Boston.  It was just like being on a bus in London with a conductor.  As well as the ticket she sold me a coffee, you don’t get that on the No. 38 from Victoria!

We landed in Boston and I collected my bags.  My plan was to head to the Trailways bus station at Bolyston and deposit most of my stuff there in a locker overnight.  I got the shuttle bus to the Blue line station and then a subway to Government Center. I changed onto the Green line and went to Boylston.  Then I discovered they had moved the Trailways bus station back to the downtown.  I hailed my first taxi in America and it took me to the Trailways station.  Once there I found that every luggage locker was taken. It wasn’t going well. 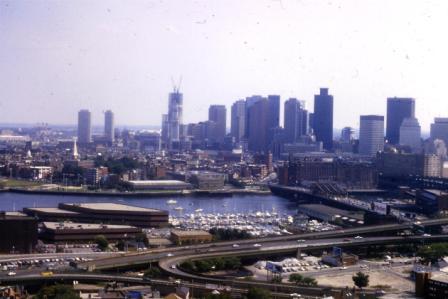 I eventually found a locker at nearby Boston South railway station and deposited most of my stuff there.  I got a map of Boston from the information desk at the station and, with radio station WROR blaring out on the Walkman, I began to explore.

Exploring Boston was actually made very easy because they had a “Freedom Trail” painted red on the pavement.  It was basically just a line to follow in a continuous loop from one place to another. The city centre was quite quiet on a Sunday morning so walking around and following the red line in the middle of the pavement was easy.

With the Walkman playing the US top 40, I set off walking past all the sites of the revolutionary war against the British.  I paused for a coffee near the place where the Boston Tea Party began in 1773, and then walked past the children’s museum, the computer museum and a strange assortment of railway box cars painted red.  I carried on past an authentic British phone box painted yellow and then came to the auditorium for a magnificent view of the pier and the waterfront.

I paused for lunch in the impressive Quincy Market near Faniuel Hall.  The market had a truly amazing selection of stalls selling every kind of food.  There was everything from Chinese to Greek and a lot more in between.  It really was another demonstration of how rich the country was and how much choice of everything there was.  I settled for some local seafood and purchased a portion of scallops wrapped in bacon served with a rice pilaf from a stand.  I followed it with some cherry split ice cream, again choosing from a myriad of different flavours.  It was all absolutely delicious. 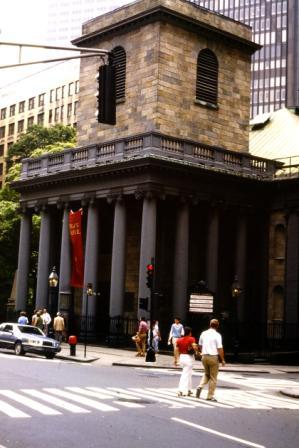 I continued following the red line past the oldest house in Boston, past a graveyard and to the Charleston Navy yard and a visit to the beautiful old restored ship USS Constitution.  Then I watched a very interesting multi-media show on the Battle of Bunker Hill where the Yankees scored their first decisive victory against the British.  At the end of the show I climbed the 294 steps to the top of the Battle of Bunker Hill monument for a bit more history and a panoramic view of the city. 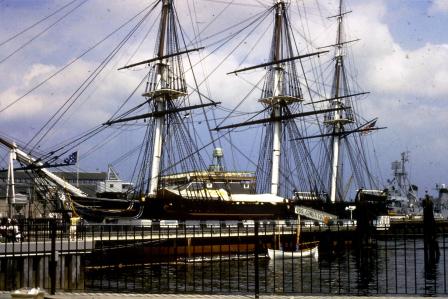 I finished with the freedom trail there.  It was about 4pm and I walked through a beautiful old tree-lined residential district.  I got a train to Copley Place and went into the very impressive shopping centre there to watch a showing of the film “Where’s Boston”.  It was another multi-media show presented on 8 screens. The guide book had rated it highly but I found it a little boring. 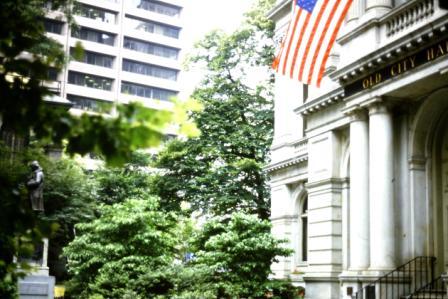 I took myself from Copley Place and found the Youth Hostel nearby. I checked in, found an empty bunk bed and had a shower.  In the common room I chatted to an English lad from Manchester, Colin, who had dropped out of the BUNAC programme and was now planning a drive away over to the west coast by himself.  He told me he wasn’t having much luck finding a car.

We were joined by a guy from Hawaii and a black American guy from Philadelphia.  We all chatted amiably and then went down to the corner of the street to take advantage of the cheap “Pizza at 60 cents a slice” deal they had on at the local pizza joint.   The Pizza was delicious and we all had two slices.

Back at the hostel I completed my chore of cleaning the kitchen, and then chatted to a few more of the people in the common room until midnight.  There was a whole array of people there: a Scottish lad on a Greyhound pass, two Germans, a Swiss, three Irish and even some American cyclists.

I woke up at 6:50am and, having completed my chore the night before, was able to check out of the hostel immediately after a shower.  I walked from Copley Street down onto the main and tree-lined street of Boston; Commonwealth Avenue.  It was a lovely summer morning and there was a “going-to-work” atmosphere with everyone hurrying around.  I stopped briefly for a coffee and a (so much choice again) black raspberry donut at Dunkin Donuts.

I got a copy of the Boston Globe and I descended into the subway station to get the train to South Station.   The trains were full of commuting Bostonians.  I read in the Globe about them finding the stern of the Titanic, about the preparations in London for the forthcoming Royal Wedding and, more locally, all about Caroline Kennedy’s wedding.

I picked up my luggage at South Station and walked over to the Trailway’s bus terminal.  My original plan had been to stay longer in Boston and then catch an overnight bus from Boston to Pittsburgh. However, the desire to see just a little bit more of New York, especially after dark, had led me to change that plan.  Now I was heading as early as possible on a bus to the Big Apple to spend as long as I could there before getting a bus on to Pennsylvania later in the evening.

I was in luck. They had seats on the 9am from Boston to Springfield and that had a connection on to New York.  We set off through green fields reminiscent of England on a bus that seemed to be just like a National Express coach from back home, if slightly less comfortable.  I changed at Springfield just after 11am and we headed south on to the Connecticut turnpike and then I-95.

The driver didn’t seem to obey the 55mph speed limit but it was difficult to tell exactly.  There was a problem with a couple of trucks on the interstate so we diverted off for a very interesting tour through the Bronx.  We made it to the Port Authority Terminal about 20 minutes after the 2:55pm scheduled time.

I put my bags in a locker and went off to discover the city again.  I had decided to concentrate on the upper west side.  I got the subway from the bus station but missed my stop on the express train and was carted all the way up to Harlem and had to change to get back down again.

I got off at 81st Street and spent a couple of hours in the happy company of dinosaurs in the Natural History Museum.  After that I had a walk around Central Park and then a look into the Dakota Building where John Lennon had lived and had  been shot outside 6 years before. 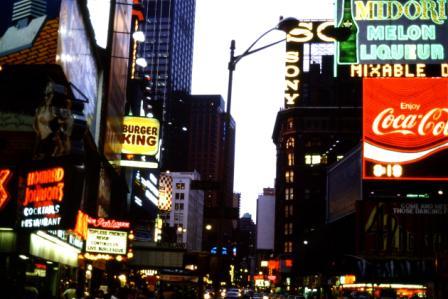 I walked down Columbus Avenue, which according to my guidebook this was the “Champs Elyse” of New York, back towards the bus station and watched all the restaurants starting to fill up.  On the advice of the guide book I got a table for one at Diannes and enjoyed a wonderful, if a little large, hamburger and fries followed by strawberry ice cream with real cherries.

I realised this was a slightly new experience for me.  I had been in plenty of restaurants with friends and relations and in plenty of cafes alone, but this marked the first time in my life I had ever been in a restaurant with waiter service by myself.

I staggered back out onto the street for a look at the Lincoln Centre and then a walk down Broadway to Colombus Circle.  I popped into a book shop near the Circle. I found  once again that the range and choice of books (like donuts or ice cream) was amazing. 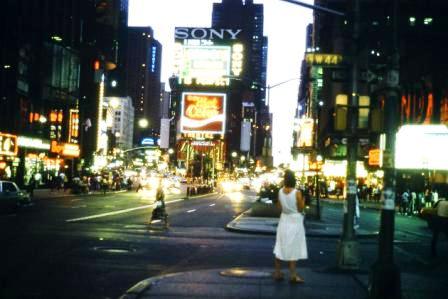 I walked down the darkening streets towards Times Square.  It was obviously more impressive at night with all the illuminated signs, but the area had a bit of a sleazy atmosphere too.   I walked over to the Port Authority Bus Station,  got my bags from  the locker and got ready to board the 9:30pm bus overnight to Pittsburgh at gate 24. 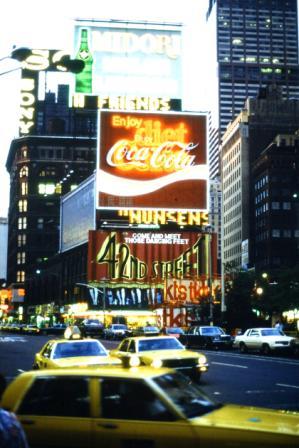 As we cruised through the Lincoln tunnel once more, I reflected on New York.   I had loved it all.  The smell of hot cooking or burning pretzels, the knishes, the hot dogs, the donuts, the “pipe tobacco” smell of the car exhausts, the newspapers littering the pavement, the garbage, the stale smells and the rumble of the subway trains just under the street.  The vibrancy of it all and the biggest surprise; the people had actually seemed quite friendly.

Luckily the bus to Pittsburgh wasn’t full and I fell asleep quickly.