Four more termini and a ring around the city

After a gap of almost 20 years, Gorlitzer Bahnhof was the first of three termini opened in a short three-year period in the late 1860s.  It was the terminus of the main line railway to Cottbus and Gorlitz, but eventually it boasted train services to Breslau and Vienna. The opening of the station stimulated the development of the district where it was located. By the turn of the century it was a bustling part of the city, with a U-Bahn station. 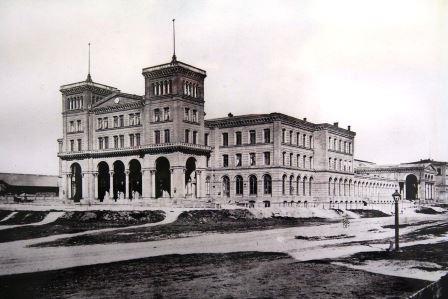 The station was bombed in the war, but like other termini its fate was sealed, not by damage sustained, but rather by its position in the city afterwards.   The station lay in West Berlin, but its main destinations, Cottbus, and Gorlitz were in East Germany.   With trains from those destinations soon diverted to the Schlesischer Bahnhof (renamed Ostbahnhof in 1950), the Gorlitzer Bahnhof was closed in 1951.

The station and its approaches remained relatively undisturbed until 1961 when the construction of the Berlin Wall finally quashed any hopes of reconstruction.  The remaining station buildings were demolished over the course of the 1960s.

Today, Gorlitzer Park occupies the site of the station and its approaches.  The only physical remains of the station site are the two goods sheds, an old office building, and the remnants of an underpass in the centre of the park.   Along with Anhalter and Nord, Gorlitzer is one of three former termini whose name lives on as a U-Bahn or S-Bahn station.

Opened a year after the Gorlitzer, the Kustriner, also known as the Ostbahnhof, was the Prussian Eastern Railway’s Berlin terminus. It was created after the completion of the line from Kustrin in 1867, and it served destinations to the east notably Danzig (now Gdansk, Poland) Konigsberg (now Kaliningrad, Russia). 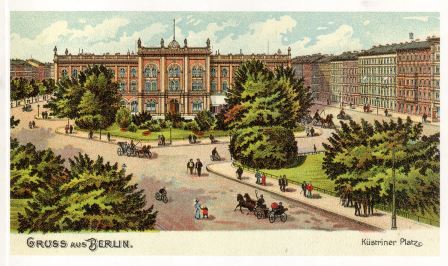 Its role as a station only lasted until 1882 when services moved to nearby Schlesischer Bahnhof.  The building was then used as a Red-Cross shelter, a music hall and the HQ of the Nazi state leisure organization Kraft Durch Freude. The building was destroyed in the Second World War.

In the 1960s an office building housing the East German SED newspaper was erected on the site.  It is now home to the renowned Berghain nightclub. 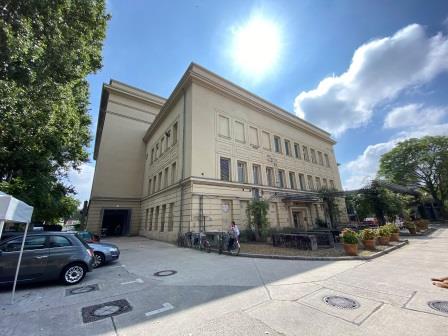 The Lehrter Bahnhof was constructed in neo-classical style as the Berlin terminus of a new line from Hannover via Lehrte. It was almost adjacent to Hamburger Bahnhof and in the early 1880s it was expanded to take over the services of that station, with traffic from Hamburg and Scandinavia diverted to it after 1884.

Meanwhile, in 1882 the Stadtbahn (see Part 3) had been constructed across Berlin and opened its own Lehrter station at right angles to the main terminus.  Whilst the Stadtbahn featured long distance tracks and several stations dealing with main line trains, Lehrter was not one of them.  It only ever dealt with local, later S-Bahn, trains.

The main station was severely damaged in the Second World War. It was repaired and put back into use for a short period. In 1951 the final train departed and in 1957 demolition began with the main entrance being blown up.

Although the terminal station had disappeared, the S-Bahn station on the Stadtbahn remained and trains continued to call there for the next 50 years.  After the reunification of the city plans were put in place for a single main Berlin terminal and the old site of Lehrter was chosen for the new station (see Part 4).

The last “dead-head” terminal station for long distance trains to be built in Berlin was also the shortest lived of all the stations and, along with the Kustriner, it was the first to close in 1882.

The terminus was inconveniently located on the south side of the Landwehrkanal, close to the approach tracks of the Anhalter and Potsdamer stations.  For the seven years of its existence, it handled trains running on the Berlin to Dresden railway.

The station was temporary in nature and plans for a more substantial building never came about. In 1882 its traffic was transferred. Most of its trains were directed to the new enlarged Anhalter Bahnhof, although the Potsdamer Bahnhof received its local traffic.

The area around the station was redeveloped and in 1913 became a station for the post office.  It remained as such until 1997. Today, the site is used for concerts and exhibitions.

Even before the last of the 9 original “dead-head” stations was completed by 1875, work had commenced on creating a circular railway around the outskirts of the city.  The Ringbahn was completed in 1877 and encircled an area that was still in the process of being built up. Over the next thirty years, almost all the land within the circle line and far beyond would be built on as Berlin expanded to become one of the World’s preeminent capitals.

The Ring line used Berlin’s first station, Potsdamer Bahnhof as its start and end point, with a dedicated terminus, the Ring Bahnhof (see Part 1) being built there in the 1890s.  The line survives today and has long been part of the S-Bahn.  The shape of the line is said by many to resemble the head of a dog.