As arranged, Luis was waiting for us the next morning. We checked out of the Albergue and set off immediately back in the direction of Cusco. The drive was to take us through the Sacred Valley to a stop at Pisac and then over the hills to arrive back into the city itself around 1pm.

It was a lovely sunny morning and as we passed through the little villages we chatted to Luis about some of the stranger things we were seeing through the window.

We had noticed that there were a lot of names and logos painted on walls all along the roadside.   They were absolutely everywhere and we asked Luis what on earth they were.  He told us they were the political symbols and names of candidates from the previous year’s election.  We continued to encounter these everywhere we went.  They were permanently painted on walls everywhere and it seemed quite strange to have all this remaining so long after the election was over. 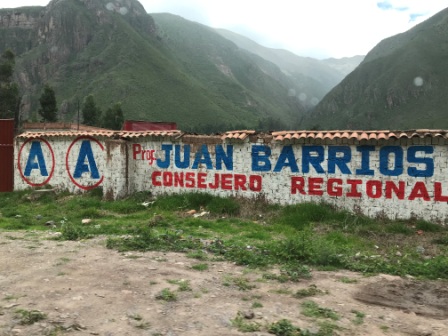 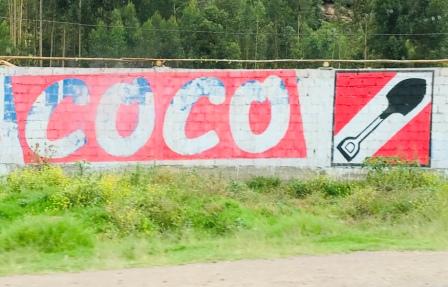 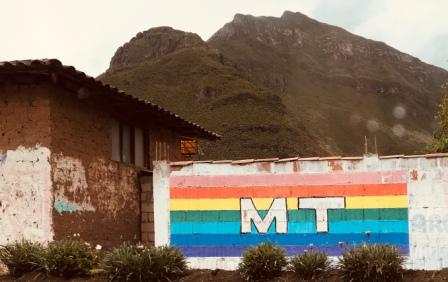 As we passed through Urubamba we saw large letters spelling out “711 Dima” on a hill in the distance. We were curious.   Luis explained they represented the insignia of a local school.  It was actually quite common to write the name and number of the school on a mountainside and we actually saw quite a few other examples later in our trip. 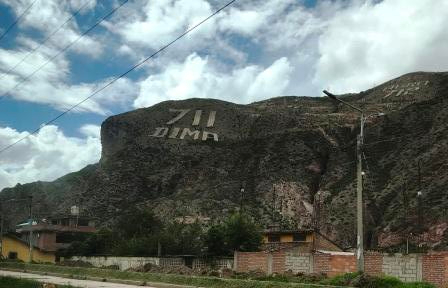 After about an hour’s drive we came to Pisac.  We climbed up to the archaeological site from the town on yet another steep zigzag road and we got a great view of more Inca agricultural terraces from across the valley. 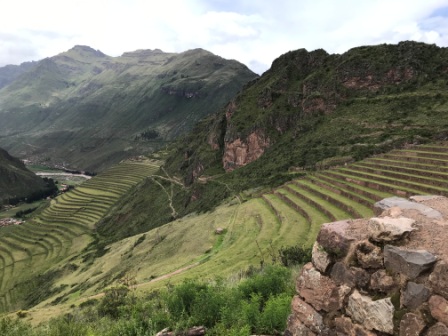 As we arrived at the little hut I got out the boleto turistico tickets and passed them to the guard.  To my dismay he pointed out that the tickets had only been valid two days and had already expired.   He suggested we would both have to pay another 25 USD if we wanted to get in. I told him that it was too expensive and that it wasn’t really fair as we had only used the ticket once at Moray.  To my surprise, he just said “okay, then” and he let us in.  It wasn’t the last time we encountered this type of mindset in Peru and it certainly wasn’t unwelcome.

There were a lot of hawkers outside the ruins and they were selling a variety of stuff.  Some of them were dressed in beautiful local clothing and many of the tourists were actually just photographing them rather than buying things from them. 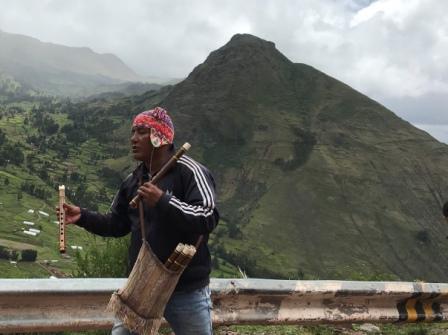 It was in Pisac that we first came across the “photograph hawkers”; people who would approach you wearing colourful clothing and holding something photogenic like a baby llama and then ask for money to be photographed.  It may sound unfair but it didn’t seem to be such a good business model as many people were just taking their pictures anyway when they weren’t looking.

The Inca ruins at Pisac are of a large citadel sitting on top of a triangular plateau with steep drops off each side.  It is assumed that it was built to defend the Inca capital of Cusco (20 miles to the south) from invasion.  Some of the citadel buildings are remarkably well preserved.

Having already visited Machu Picchu I had assumed that I wouldn’t be that impressed by Pisac. But in fact I thought it was actually quite spectacular and almost on a par with what I had seen the previous day. We climbed all the way up to the ceremonial centre on the top and from there we had absolutely magnificent views into the valley from both sides.

After exploring the ruins we drove back down into the town to visit the handicrafts market.  It is the biggest of its type in the region and had over 100 stalls. Some of them featured the artisans themselves hard at work on their various crafts. 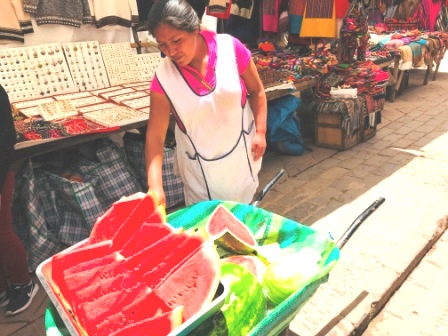 Despite it being a beautiful warm sunny day, the curse of the rainy season had struck again and the place was almost totally deserted.  We wandered around buying only a couple of balls of alpaca wool and feeling sorry for the poor stall holders.

Before we left Pisac we enjoyed some delicious corn on the cob from a little stand near the entrance to the market.  The kernels were bigger than I have ever seen before and it tasted absolutely delicious. 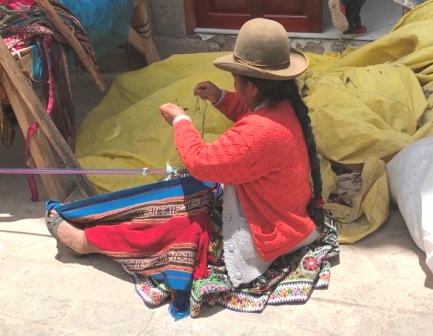 On the road out of the town we stopped to look back at the Sacred Valley one last time. There was no doubting that the views in this part of the world were something else.

We then descended into Cusco, said goodbye to Luis and after checking into our hotel, set about exploring the city.

What are you looking for?

Cusco (population 350,000) was once the capital of the Inca Empire and, although often overshadowed by Machu Piccu and the Sacred Valley, it has plenty of significant archeological remains of its own. 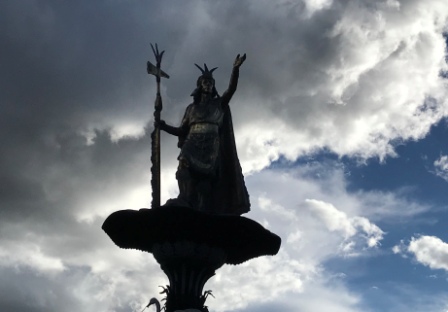 The city also has a wealth of Spanish colonial architecture and the Plaza de Armas, also once a great Inca square, is at the centre of it all.  It is home to the city’s beautiful cathedral as well as arcades full of shops. It was where we headed first. 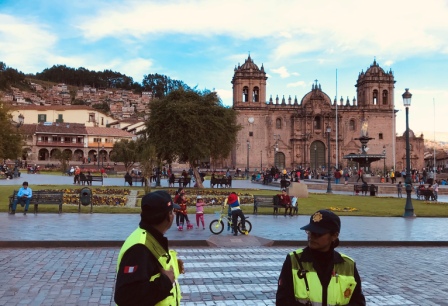 Beautiful as Cusco was, it wasn’t without its annoyance; almost everywhere we went there were girls selling massages and touts selling almost everything else.

Amazingly, the touts always seemed to have the same question ready : “What are you looking for?”.   It was if someone had been over and taught every single one of them the best question to ask tourists.

The sales pitch was always the same whether they were selling tables in restaurants, paintings, llama wool or trips to the ruins.  They wanted you tell them what you were looking for so they could tailor a response to it.  I mostly ignored them.

Nevertheless, the touts were never quite as aggressive as I have encountered elsewhere and they always seemed to take no for an answer. 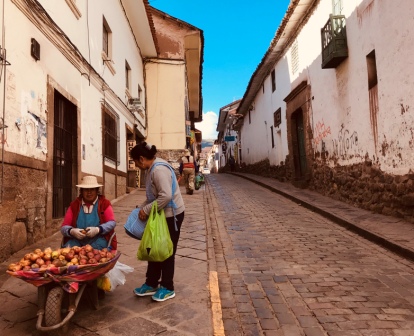 After seeing much of the tourist centre, we walked over to the more workaday part of the city and spent time walking around the area of St Pedro with its impressive market.  The market was full of locals stocking up on produce and groceries.  The fresh fruit drink counters, and there were lots of them, were especially impressive. 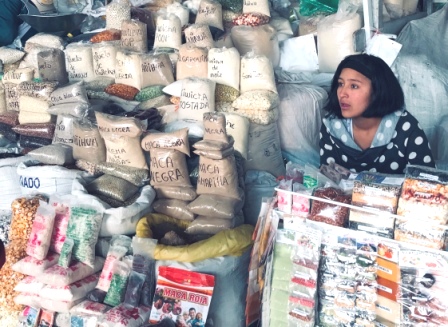 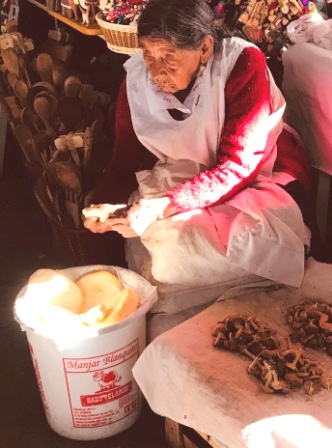 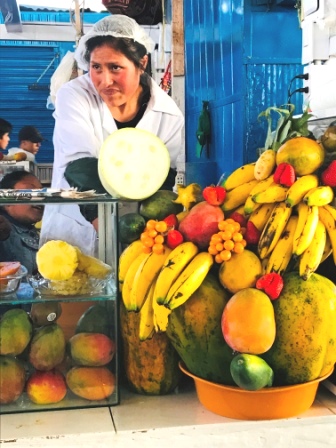 We concluded our trip around with a walk up to the San Blas area.  The bohemian district is a little bit different from the rest of the city and seemed a bit quieter too.  Some of the most beautiful little streets in Cusco can be found here including the famous Inca road – Halthunrumiyoc.

As we walked around my wife started to get a little dizzy and we put this down to the altitude sickness.  Cusco is at 3300m and although we had theoretically had time in Ollanyatambo to acclimatise, the effect was still quite pronounced.  We went back to the hotel for a rest.

In any case, we needed to take it easy as we would be going even higher on the train to Puno the next morning.

Not “The Andean Explorer”