In the next 24 hours we would complete our great circle passage across the North Atlantic and then would set a westerly rhumb line course which we would maintain until our arrival in New York.

This track would take us across the Newfoundland basin. In winter we would be sailing further south well clear to the south of the ice limits that have been promulgated by the North American Ice Service

For lunch we decided to try the pub food in the Golden Lion and we were not disappointed. We had tasty fish and chips and a lovely suet crusted steak pie washed down with a pint of best bitter.

We stayed in the pub to listen to the lunchtime jazz recital and then went back to the library for some more relaxing reading whilst peering over the beautiful bow of the ship.

Jogging was a little later today, but I stayed longer and completed the 3 laps of the deck that officially make a mile.

After some wine in our cabin we enjoyed another beer in the chart room and listened to yet more jazz. Dinner was cerilac soup and venison and after dinner we spent some time watching the ballroom dancing. Celia Imrie was there waiting to be asked to dance but I just couldn’t summon the courage or energy.

Finally we headed into G32 for some more dancing to the band. We had another long dancing session until one o clock. We were dancing with an English couple about the same age as us. They were excellent at swing dancing and by chance we bumped into them in a swing dance club in New York two nights after we arrived.

Making my usual circuit of the ship I spied an eastbound cruise liner. It was brightly lit but about 5 miles away. This was the first ship I had seen since Tuesday afternoon. It was windy again but to get a better view I ignored the “Deck Closed” signs and climbed up to the top deck. This was a big mistake. The wind was much too strong and almost blew me sideways across the top of the ship. I retreated hastily through the deserted Lido and to bed.

We woke at 7:30 my wife went off to stretch class and I spent an hour relaxing in the cabin and looking out into the ocean. The sea lanes were getting busier now and I spotted 2 tankers coming north towards us almost side by side.

We had breakfast in the Kings Court and then, in one of the highlights of the week, we participated in a tour of the kitchens. We bumped into “Manchester United Ian” and in his company made a 30 minute guided circuit of the immaculately kept kitchen of the Britannia restaurant. 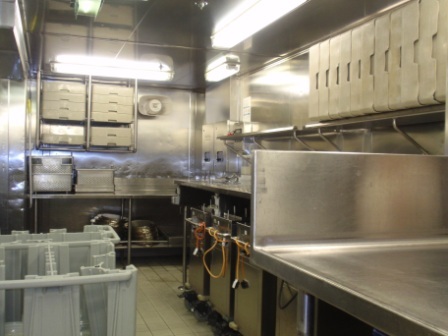 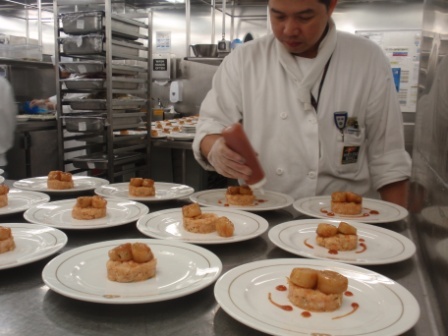 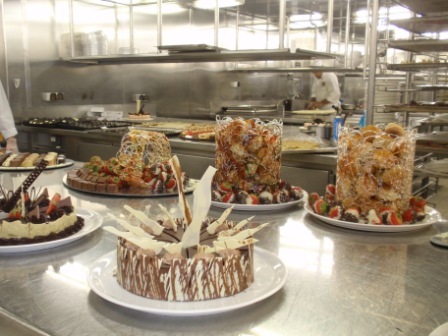 We watched the chefs at work preparing the food, tasting the soup and baking the bread. The statistics were amazing too.  One of the most impressive things was that there is only one person in charge of all the steaks. He can fry up to 90 steaks simultaneously and he manages to deliver them all to the correct level of rare / well done.

After the kitchen I attended a lecture on Brunel and then finished off a second batch of laundry. I went for another run around the deck and completed another session in the gym.

I met my wife outside the Britannia restaurant as the noon bell sounded.