After disembarking our Southampton pilot yesterday evening, we had sailed around the north-west tip of the Isle of Wight, and along the southern coast and into the English Channel.

We had set a West-South Westerly course paralleling the southern English coast. During yesterday evening we had passed 12 nautical miles south of the Bill of Portland and Start Point.

In the night we were to the south of Bishop Rock and at that point we crossed the Celtic Sea and had commenced our great circle passage across the North Atlantic Ocean.

After the announcement we went up to the bridge viewing area. It is open from 9am to 4pm each day.  Standing in the small corridor situated right behind the bridge one can sense the size of the bridge and see the various computerised instruments that help drive the ship across the ocean.

Shortly after the trip to the bridge we saw an Irish fishing boat and an eastbound grain carrier. These were the last ships we saw for several days. 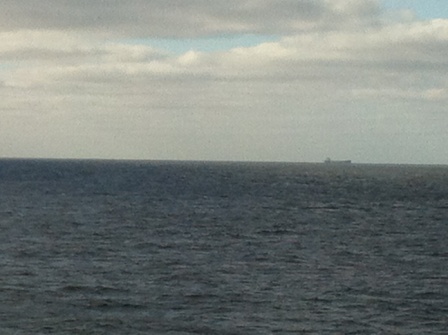 We had decided to forgo lunch in favour of afternoon tea so we spent a happy two or three hours sunbathing at the beautiful stern of the ship observing the gorgeous wake the 4 propeller pods left in the water.   I dipped in and out of the pool and the hot tub. The weather was idyllic and it felt almost as if we were on a cruise ship. 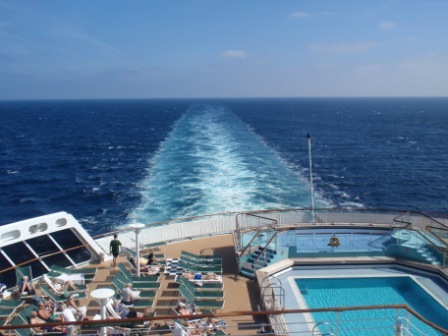 At 3pm we went to the Queen’s Room for afternoon tea.

The Queen’s Room is located towards the stern of the ship on Deck 2. It is named for Mary of Teck who was the wife of King George V. She launched her namesake – RMS Queen Mary in 1934.

We bumped into Ian and Gillian again and decided to join them for the tea. My wife had been looking forward to this and Cunard did not disappoint her. A string quartet played in the background whilst servers wearing white gloves served delicious sandwiches, cakes, scones and (for me at least) Coffee.

Ian related his childhood trauma of watching Manchester United being demoted to the second division. I just espoused on the general trauma of supporting Blackpool. 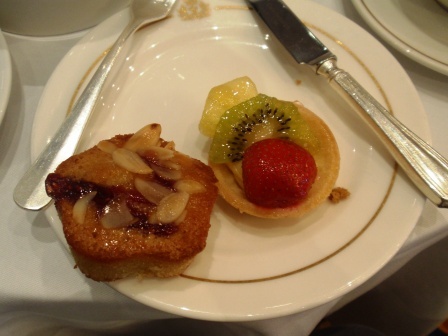 After Afternoon tea we went shopping in the Mayfair shopping arcade. “Mayfair Shops” is another name lifted from the original RMS Queen Mary. Even in Long Beach today you can still see the names on the shops – Austin Reed, WH Smith etc… The shops on QM2 were not really my cup of tea, and they resembled pretty much what you would find in an airport. My wife loved them though and struggled not to spend any money.

The 3-D planetarium show began at 5pm and lasted 30 minutes. It was narrated by Robert Redford and told the story of objects colliding with the earth throughout the millions of years of history. I have never even been to a planetarium on land, so I found it interesting enough. It made my wife feel sick. I doubt we will be going to another one.

After drinking some of our stash of wine in the cabin we dressed for Dinner. Tuesday night was a formal night and that meant dressing up in black tie and evening dress. Cunard are famous for maintaining quite a strict policy for the dress code in the evening. It does sound a bit silly at first, but when you gather with other elegantly dressed people in the beautiful areas of the ship you do see the point and understand why they do it.

We had a pre-dinner drink in the elegant chart room located next to the Britannia restaurant on Deck 3.

At 8.30 we met Terry and Janet again at our allocated table and waited for Tom to turn up. He didn’t show. Terry mentioned that he had seen him with a woman after the theatre show the previous evening. “He’s pulled” – Terry said. And so he had. We later learnt that Tom had joined his lady friend, switched to the early sitting to be with her and declared his own Scottish Independence. We never saw him again.

We were now a party of 4 sitting on table for 6. For the rest of the voyage we got on like a house on fire.   Terry had a lovely sense of humour and both of them had many wonderful stories of their lives living in Australia, Canada and London. They were travelling to see their son in Toronto. Terry didn’t like flying so they were making the trip there and back by QM2 and Amtrak train. We dined that night on prime rib.

We were feeling more energetic than the previous night. At 10:30 we went to the 45 minute show in the Royal Court Theatre. The theatre is located just aft of the Cinema/Planetarium on Deck 2 and is very impressive. Phillip Brown was an excellent singer and straight from playing the lead in the Lion King in the West End.   He told the story of how he went from being a London bus driver to staring in the most popular musical in London. I met him in the gym later in the voyage, and he told me the longer version of the story.

It being only 11.15pm we walked to the back of the ship and into the G32 night club. We danced the night away to the excellent band Vibz as they played a selection of Reggae 80s, 90’s and more modern music.

It had come as no surprise to me that the average age of the passengers on the ship was probably well over 60, but I was surprised at the amount of younger people on board as well. G32 at midnight was obviously the place to find them and we danced away with people mostly a lot younger than ourselves.

I then took a long walk around the deck. All alone and dressed in a dinner jacket, I followed my routine from Long Beach. I walked around the decks, up and down the steps, down to the flagpole at the stern then up to the funnel on deck 12. I did the same for the rest of the nights I spent on board and it was pure magic.

We retired to bed after 1am, but as the clocks were going back again 1 hour at 2am – it only felt like midnight.

We woke up again quite early, and saw that it was foggy.

As the day wore on the fog cleared but the wind condition worsened and the sea became rougher and rougher.   At last some interesting weather!

My wife managed to break the plastic shower fixing so we called Joseph, our steward, and he promised to take care of it quickly. He did too. Later in the voyage we had another issue with a blocked toilet and that too was sorted out quickly. The QM2 staff impressed me greatly. With almost no exceptions they were friendly and professional. 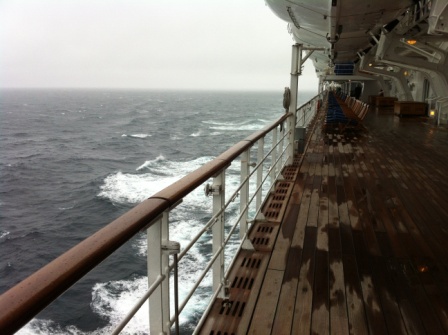 We went first to the gym and had a run around the promenade deck too. It was quite interesting trying to run as the ship pitched and rolled a bit.

We had breakfast in the Kings Court Buffet. It was a mishmash of sausages, haddock and kippers from the excellent buffet. The bread was obviously baked on board. It was always fresh and it tasted great.

We went for a walk around the deck and saw that the weather was certainly closing in a bit. The view from the stern was no less magnificent even in the bad weather.

There was nothing much else to do outside so I decided to go to the pub. The QM2 Pub is called the Golden Lion and is located opposite the Casino on Deck 3.   Armed with pencil and paper I opted to take part in the 10:30am pub quiz. I sat at the bar nursing a pint of bitter next to a friendly guy from Wales. He claimed he didn’t want to take part in the quiz but muttered quite a lot of the answers to the 20 (very difficult) questions. We got 12 correct. It was pretty mediocre.

My wife tried her luck in the Casino opposite the pub but didn’t get anywhere.

At 11.00 we decided to cut out loses and head for the Royal Court Theatre. Cunard has a long history of carrying celebrities on its liners. The QM2 is no exception. George and Barbara Bush were on recently and Helen Mirren is a frequent passenger. Our celebrity was (wait for it) Celia Imrie.

I was skeptical at first. But it turned out that Celia was actually travelling from London to Los Angeles via ship and train. I will give her full marks for that. She had agreed to work her passage by doing a couple of lectures and talks about her life.   For 30 minutes or so, we were treated to a potted history of her career and a rundown of her next film – “The 2nd Best Exotic Marigold Hotel”.   It was interesting enough and as she spoke the ship began to sway a little bit more.

By the time Celia had finished it was almost noon.