The border crossing was pretty straightforward.  After undergoing a rudimentary customs check, I walked through the border and into the dowdy little town of Sungei Golek.   There I changed some more US dollars to Baht and put my watch back one hour to match Thai time; 6 hours ahead of BST.

I walked to the little railway station and found the train that was to take me to Surat Thani, the changing place for the boat to the island of Koh Samui, already standing in the platform.

We set off on time at 10:05. I found the train very comfortable and the service was absolutely excellent. There were food and drink sellers moving through the carriages all the time. At lunch time I ordered some chicken & cashew nut stew with rice and I was surprised when it was brought to my seat on a china plate. It was delicious too.

The scenery was mostly rice fields and little towns. The station signs were all written in the mysterious-looking Thai script. The first time I had seen a place covered in anything but roman letters. Obviously, it all made no sense at all, and unlike in Malaysia, it was impossible to even guess the meaning.

At 19:00 we arrived at Surat Thani and, after a few minutes transfer, I boarded an extremely overcrowded and battered old bus which took me on the 15km journey from the train station to the quayside. It was horrible. I stood for the whole 50 minutes and could hardly move.

There were still three hours to wait on the quayside so I bought a Coke and sat and watched the comings and goings of the port.

At 23:00 I boarded the boat. It was a smallish affair mostly made out of wood.  At first it didn’t really look as if it could hold all the 100 people that boarded it, but it did.  It was crammed full but I found a place to put down my sleeping bag on the floor at the back on the lower deck.  I got a position next to an open port hole hoping to see outside, but I quickly fell asleep and never even noticed the boat leaving.

I stirred at about 5am.  I realised the boat had docked but I knew I could stay on it until after 7am. As I drifted in and out of sleep, I kept hearing cries of “Lamai”, “Lamai” out of the porthole.   When I woke again it was 7am and the boat was almost empty. In an attempt not to be the last off I got up quickly.  I hit my head on the beam and it actually started bleeding.

I gathered my rucksack and hurried down the quayside.  The sun was out and it looked like another lovely day.

I immediately worked out where the cries of “Lamai”, “Lamai” were coming from. The quay was lined with pick-up drivers shouting the destination (Lamai beach) over and over again at their potential customers. I ignored them and headed into a coffee shop. They had a menu in English, real coffee and real milk for the coffee.

At 8am I finally set off in a pickup truck to Lamai Beach. It was about 10km from Na Thewn (the boat harbour) which was also the main town.  The island road stretched round for about 30km in a circle passing through the main two traveller’s beaches at  Lamai and Chaweng.

The main form of transport on the island was the Toyota pickup truck.  You just sat in the back on a row of benches facing each other, held on and hoped.

My fellow passengers were all local town folk. Most were carting heavy baskets of fruit and produce but one had a large box of prawn crackers.  We rode around Na Thawn a few times picking up more people before the driver decided we were full enough to depart.

As we left the town and got closer to Lamai the island revealed its charms. It was a very scenic 20 minute trip.  I alighted from the pick-up in what they told me was central Lamai.

There were coconut trees almost up the beach. I began walking along the beach.  Every so often there were traveller’s hotels; basically “mother” restaurants with a series of huts surrounding them. They had names like “Coconut Villa” and “Lamai Magic Mushroom Hotel”. They all looked very similar to one another.

They all had the same kind of restaurant, were all full of travellers, and all had motorbike or jeep rental. All of them seemed to show pirated copies of western films on large TV sets beginning every evening at 7pm.  That night’s film was written on a chalk boards outside the restaurants. The idea, I assumed, was to get people to chose a place for dinner based on the film they were showing.

I walked the length of the beach looking at all the guest house names and eventually I decided to try “Mui Bungalows”. I paid  40 baht for the night (renewable every morning if I decided to stay) and I was shown to a wooden hut. It had a florescent light, a wooden bed with a basic mattress and a fan.   I quickly set up my mosquito coils as I had heard rumours about nasty diseases when I had been in the queue for the boat.

I stayed at Mui for five days.

It was difficult to leave.

Mui was owned by a mother and daughter team; Mama and Nina. They cooked us beautiful food and we enjoyed Thai coconut curry, barbecued fresh fish and tuna salad. For breakfast banana pancakes were quite the thing. There was excellent coffee in the morning and Singha beer in the evenings.

The days merged into each other and were passed swimming and sunbathing, walking and talking. There was a flea market about 1km away in Lamai itself and I visited that on occasion. There were books for exchange as well.  Given my location and destination I bought and finished reading a copy of Bridge over the River Kwai.

My fellow residents were two Israelis, two Australians (Shane and Steve from Perth who were heading to India) and a West German (Bert from Berlin). We were joined on the 2nd day by 5 English girls who had just left Nottingham University.

We would all chat around Mui or walk up to one of the other restaurants that lined the whole beach.

The films in the evenings were the latest new releases, albeit shown on a smallish TV screen, but suffered from the fact they were obviously pirated copies.

After the films there was the open air “Flamingo” disco. It was actually covered but the sides were open to the elements. It was a strange and potentially dangerous mix of Westerners, Thai women and Mekong whisky.

On the Sunday night there was a full moon beach party laid on by some of the hippies who were staying nearby.  They arranged beach fires and fireworks all along the beach.

After a cracking meal at Mui Bungalow of chicken in oyster sauce and vegetable rice we watched Apocalypse Now or “Apocolypiss Now” as Mama had written on the sign.

I went off to the Flamingo disco with some Germans and Dutch lads.  The Thai song  “Zabai Zabai” was played over and over again as it seemed popular with the westerners.  We all got drunk on Mekong whisky.

The next morning I decided to rent a motorbike to see more of the island.  I got a small Honda moped and quickly taught myself to ride it.  It took a whole 6 hours to get round the island as it was bigger than I thought. I saw Chawaert bay and climbed the statue of the Big Budha beach.

For lunch I stopped at a Laotian restaurant.  I climbed up to Na mueng fall and ended up at Wonderful Rock. The significance of the Grandfather Rock and the Grandmother Rock was explained to me by a German engineer (always good to have one of those around, I thought) who happened to be perched on one of them.

Life continued and I hung around enjoying more of Mama’s excellent cooking. I had sweet and sour prawns and vegetable rice before heading off to another guest house nearby, “Animal House”, to catch the evening film.

I was in the middle of watching Crocodile Dundee when we were interrupted half way through by a power cut. 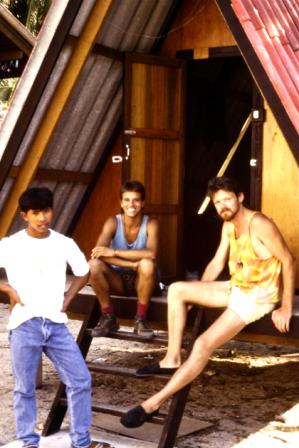 As everyone started to drift away from the TV screen, the German engineer appeared and started to tell us how such a thing couldn’t happen in Germany.  In Germany, he explained, they would have had a back up generator.

With the power out it was so dark that I couldn’t find the hut.  I  wasted about 20 of my matches trying to see the way back, and then about 20 more trying to find my candle in the hut. I used the last few matches to light the mosquito coil. The power came back at 3am.  I knew that it happened at 3am because I had left the light on and it burst into fluorescent life and woke me up.

I decided I had had enough of Koh Samui and I decided to leave the next day.

The next morning I woke up early at 8:30am and had my last coffee and my last banana pancake breakfast. I was climbing into the pick up outside when Mama came running out; I  realised I hadn’t settled the full bill and I still had my key. She laughed it off.  I thanked her for a fantastic and relaxing time in Lamai.

I spent the morning wandering around Na Thon.  I bought a ticket for the 2pm ferry back to the mainland and then had a snack of dried fish whilst waiting for it on the quayside.