We woke up and had tea and coffee in bed.  We then negotiated a taxi to the railway museum where we spent most of the morning.  There was a very interesting collection of old railway locomotives and a small bookshop where I bought a couple of books.

We found a nice restaurant near Connaught Place and had fish tikka, murg chicken and vegetable pilau.    After lunch we found the BA office and received our tickets and confirmed our reservation.  From there we got an auto rickshaw to the Nehru museum and spent the rest of the afternoon learning about the life and times of independent India’s first leader.

In the early evening we walked around the really colourful and different atmosphere of streets around old Delhi.  We found another little restaurant and had idli, cheese pakora, vegetable korma, and vegetable rice. 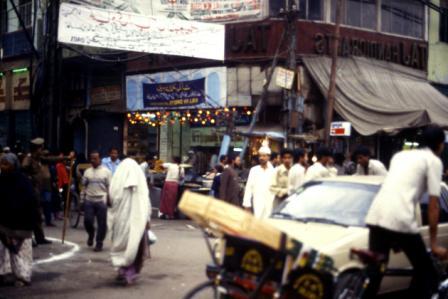 We ended the evening back at Imperial hotel sat in the bar reading a two day old copy of the Sunday Times.

This was our last morning in India. We woke up late and checked out of the Imperial.  I treated myself to a beautiful shave at the barbers shop before a leisurely lunch out on the lawn again.

We wandered around a bit after lunch and bought a few souvenirs and, after a long walk, we found somewhere for coffee and samosas.

We returned to the hotel for about 7pm and jumped into a taxi to the airport.  The driver was very convivial and talked to us the whole journey about his own life and our experiences in India.  It was the perfect ending to the trip.

The immigration officers at the airport were also really friendly and asked us about where we had been and what we had seen.

We had a drink in the bar at the airport and then a game of cards before finally queuing for a long time for the security check.

We boarded the BA142 just after midnight and took off soon after.

We found the seats on the 747 quite cramped compared with other airlines and my wife was crushed in the middle between me and a very large Indian woman.

The flight landed on time at Heathrow at 04:20.

We were taken into an interview room by the immigration people but, after a short chat, the spouse visa was activated quickly and  we were allowed to continue on our way.

We flew to Manchester and then caught a train directly into Blackpool.

I was finally about to start living in the UK again for the first time since 1986.