I was up at 5:30am and, after a short walk, I was soon at the St Kilda Station. I got the 6am train heading into the city. I changed at Flinders Street, buying a muesli bar and a copy of the Melbourne Age in the process, and then boarded another train to Kensington. Kensington sounded posh but it turned out to be an industrial suburb full of factories and warehouses. I found the BASF factory after a few wrong turns, headed for the production area and introduced myself.

Arthur was the supervisor and he was helped by Eric, Steve and Sam. After about 10 minutes another temp from Drakes, Tom, turned up. The work was incredibly tedious. We just spent all day assembling cassette tapes into groups of three and feeding them into a machine which would wrap them and spit them out ready to be put into boxes.

I clocked off at 4pm and returned to St Kilda. I went shopping and I decided that it wasn’t such a bad little place to be after all.   I had a Soulvaki for dinner.

I followed the same routine as the previous day. It totally dull but it was money. Then at 3pm Arthur called me into his office and told me that they had had to let Tom go. Two tapes had gone missing and they knew it was him. I was dubious because Tom had seemed fine. Arthur told me that he would be letting me go too but stressed I was not a suspect.   I would be paid two hours extra as compensation.

I wandered back to St. Kilda stopping in at Drakes on the way back. I met a few of the other temp workers at the little Friday evening get together.   I picked up a copy of Graham Green’s Brighton Rock at a second hand book shop. It seemed appropriate as St Kilda wasn’t at all dissimilar to Brighton.

Although it was already a Saturday, the day was also an important Australian holiday.  It commemorated the tragedy that befell the Australia and New Zealand Army Corps at Gallipoli in 1915.

Even though it was towards the end of Autumn it was also a lovely day and it reached about 25 degrees in the sun.

I caught a train up to town and watched a parade going down Swanston Street. Then I jumped on another train and headed out of the city towards Belgrave in the Dandelong Mountains about 30km north east of Melbourne.

At the end of the electric train line at Belgrave was the Puffing Billy railway. It was, surprisingly, billed as Australia’s number 2 tourist attraction. It was a sort of Australian version of the Ffestiniog Railway. It climbed about 13km through mountain scenery to the terminus at Emerald Lake.

I boarded the next train and was treated to a fantastic journey through forests, past fern trees and gullies and over wooden trestle bridges to the terminus. The area around Emerald Lake was quite enchanting in the autumn sun and I enjoyed a picnic lunch whilst dipping into Brighton Rock and watching the trains come and go.

I spent most of Sunday morning relaxing in Melbourne’s beautiful Fitzroy Gardens. They had a miniature recreation of a Tudor village and Captain Cook’s cottage from Whitby in Yorkshire.   I carried on through Exhibition gardens and then along Lygon Street; a very picturesque Italian neighbourhood complete with painted houses, pavement cafes and cake shops. I returned to St Kilda and finished off bookshop hopping.

I finally met my old Blackpool school friend, Brian, at the university. He introduced me to his fiancée, Jane, and we chatted for a couple of hours. He was in the geography department and had just returned from a field trip to Antarctica. He invited me to a slide show on the subject on Wednesday evening.

I called Drakes and they told me to come in to pick up a dust coat as they had secured work for me from the next day.

I caught the tram to East Hawthorn. I had to walk quite a way from the tram stop all the way down Toornga Road. It was drizzling and I was quite wet when, at 9am, I arrived outside the Mattingley Advertising Agency. The building was locked up and quite deserted. I checked that I had arrived at the right place.  I had and I was on time too.

I waited in the rain until about 9:40 when a white truck turned up.  It was driven by a guy named Robert. Robert apologised for being late. He told me that Mattingley had already moved a week ago, he had the keys and we would be clearing out their basement. He explained that half the furniture would be taken to their new offices around the corner and the other half would be going to the tip. 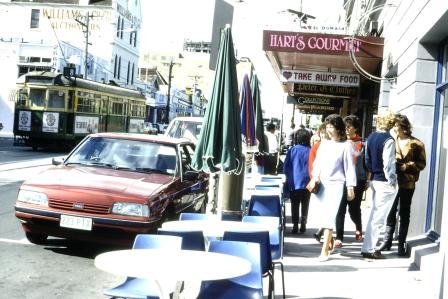 Robert was a 25 year old Aussie and had only recently bought himself the truck and set up a fledging removal business. Mattingley was one of his first customers.   The job was hard, heavy lifting but it was interesting. We were moving a whole variety of stuff all about commercials on film and videos. I recognised some of the stuff from what I had seen on TV.

Robert treated me to a chiko roll and chips for lunch and we were about to get back to the job when he got a phone call. Another client wanted him more urgently. We put Mattingley on hold and drove 45 minutes across the city to the Australian Psychologist’s Society.

We then sat around in an office for an hour watching some guys stretch a carpet across the room. When they had finished we set to work bringing filing cabinets from another part of the building and placing them in rows on the newly laid carpet.

It was more hard work but Robert was a nice guy and we got on well together. We didn’t finish until 6:30pm so Robert kindly dropped me back at St Kilda. He also agreed to pay me for 9 hours which was very generous of him.

I checked out of Hampton House and headed to a youth hostel in Chapman Street. The place was getting me down. The room still stank and I couldn’t seem to get rid of the TCP smell. There didn’t seem to be as much work in Melbourne as I had hoped so I didn’t want to lay down another week’s rent. I would be better off paying on a nightly basis back at a youth hostel.

The youth hostel on Chapman Street was in a modern building and, unlike the first place I had stayed at, it was open all day. With no work scheduled, I took a tram to East Brighton. It turned out to be a bit of a shit hole, but I had a decent cappuccino in a nice café at the terminus.

At 5pm I returned to rendezvous with Brian at the University and spent a very pleasant two hours drinking wine, eating cheese and watching Brian’s slides of Antarctica. There were some interesting people among the other guests including a lad from Lancaster who was studying archaeology at Melbourne.

We went back to Brian’s little house and Brian and Jane cooked me a lovely meal of vegetable spaghetti. We talked about old times in Blackpool and the plans for their wedding and the trip around the world they would make afterwards.

I rang Drakes early but there was no work to be had. I walked into the city and had a coffee and donut near Flinders street. I walked around Myers Department Store and then around the Botanical Gardens. I popped into Drakes again but I was told that there was nothing doing for Friday either.

Back at the hostel I cooked vegetarian burgers and broccoli and chatted with a guy who had been working with Declan in Western Australia.

I decided to stay one more night at the hostel. I would look around Melbourne again and then visit Drakes one last time. If there was no work for next week I would hitch to Adelaide the next day and try my luck there on Monday morning.

I had a Turkey bagel for my breakfast and went off to the Victorian Art gallery. They had an interesting collection of European and Japanese art but their collections of Australian Art naturally interested me the most. There were lots of paintings of the days of the early settlement including works by Glover, von Guerand and the one I really found interesting; Frederick McCubin’s the Pioneer. I bought a postcard of it and stuck it in the back of my diary. 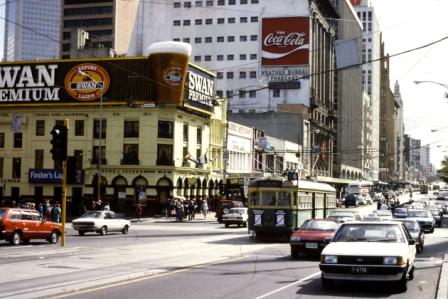 Grant at Drakes surprised me. He had a 3-week placing for me at Melbourne’s ICI factory in the Western Suburbs. I accepted it.   I had a few cans of Victoria Bitter with the lads to celebrate my new semi-permanent status.   On the way back to the youth hostel I realised that I would need a new place to stay.

On the Saturday of the first really damp weekend of the autumn in Melbourne I made some calls and finally got a bed in a hostel at 148 Croxford Street round the corner from North Port station. I trudged round there in the pouring rain with all my stuff.

I soon discovered that it wasn’t a hostel at all but just a large flat. There were 5 bed rooms, a kitchen, a large lounge with a coal fire and one bathroom. It looked quite homely though and I decided that it would be perfectly fine for three weeks. I had already decided that at the end of the three weeks, work or no work, I would be heading west.

Jenny, a friendly Welsh lass, was acting as the warden and she showed me around and introduced me to the other residents. She had her own single room. Then there was Andrew from Yorkshire who would be my new roommate. Michael from Scotland shared a third room with Peter from Penrith. Erdbert from Holland shared the fourth with Malcolm from Middlesborough and a young couple from London, who were out at that moment, occupied the final room.

I settled into my new room, popped out to do a bit of shopping but spent the rest of the day reading in front of the coal fire as the heavy rain tapped on the windowpanes.

I spent most of the day getting to know my fellow residents and made a brief trip to South Melbourne Market which was just around the corner. There were good deals on cheap vegetables and fruit and some delightful little stalls selling deli items.

In the afternoon we all went for 2 schooners of beer at the local pub and then returned to watch Malcolm try to cook a chicken in a paper bag in the oven. He almost set the place on fire in the process. In the evening we watched Lady Chatterley’s Lover on the TV.

After just two days I felt quite at home. It was pretty much like sharing a flat with a bunch of friends and as it was getting colder outside it was really cosy inside with the real fire in the sitting room.  I decided I really did like Melbourne quite a lot.