The setting of Medellín is quite spectacular.  The city of more than 3 million people lies along the long Aburrá valley.  The Rio Medellín flows south to north, and whilst most of the centre of the city surrounds it on the low ground, residential districts, barrios, stretch far up the hillsides in all directions. 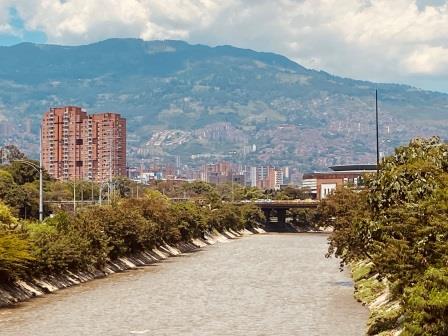 Metro Line A follows the path of the river for 16 miles and has 21 stations.  At San Antonio, close to the centre, it intersects with Line B.  This second line extends westwards across the narrow valley floor; with only 6 stations, it is just 3.4 miles in length. 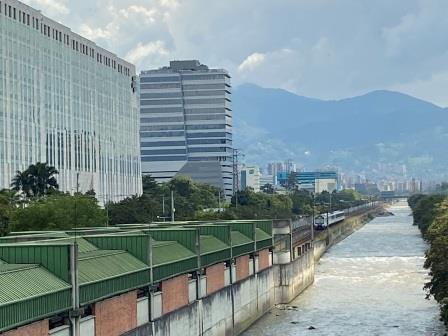 The trains, a mixture of MAN and CAF vehicles, are frequent, fast, and spotlessly clean. The whole system, including all but one far flung cable car, has a common fare structure and operates via smart card. 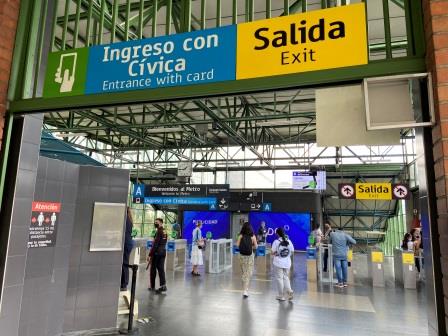 On our first day we walked from the quiet suburb of Laureles, where we were staying, towards the centre of the city.  We paused at the Parques de Río Medellín, a network of footpaths and cycling routes alongside the river corridor, featuring public artworks and flowers. 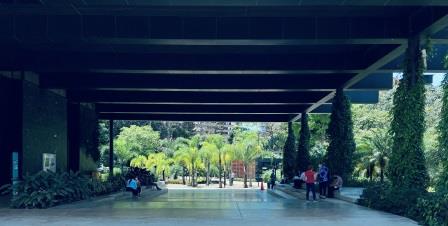 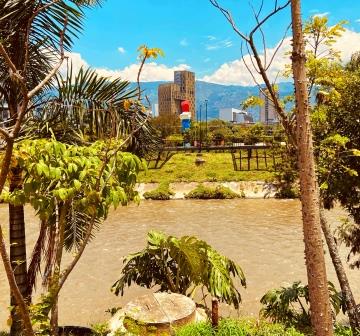 It was a lovely sunny day, and the weather certainly lived up to Medellín’s image as the “city of eternal spring”.  With little variation throughout the year, the city’s average temperature varies between around 17°C and 28°C. 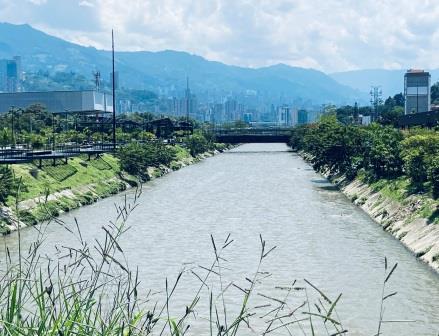 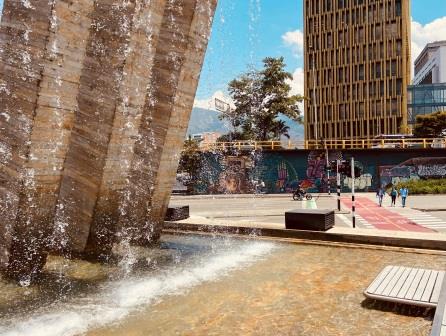 We crossed the river, and paused again to admire the fountain in the Parque de los Descazos. We made a brief visit to the Iglesia del Sagrado Corazón de Jesús before grabbing a drink at a café in a back street full of car repair workshops. 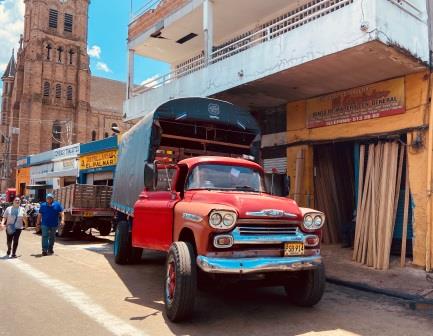 We walked for several blocks through bustling streets towards San Antonio.  We wandered through crowds of shoppers on Carabobo & El Hueco, two of the busiest streets. 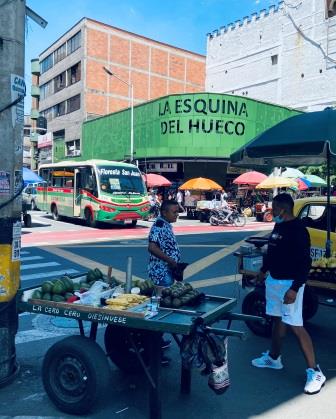 The shops and stalls seemed to be doing good business. There was an element of clustering; one street was full of shops selling shoes, the next one had bags for sale, the next something completely different. 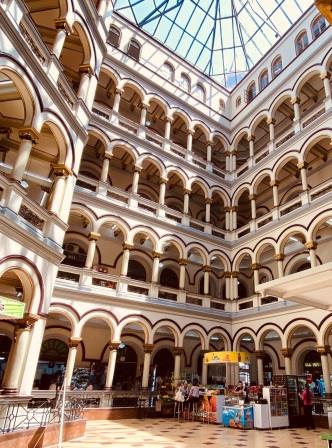 Eventually we came to the Palacio Nacional, an old building that has now been turned into a shopping centre.  We stopped for a while to admire the impressive restoration. 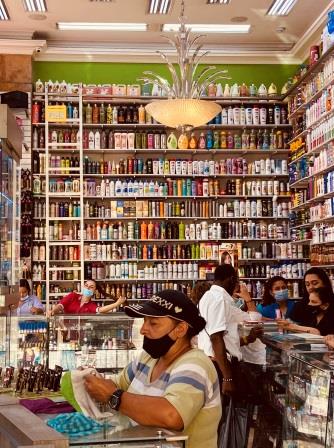 We negotiated our way through several plazas and squares. There was the Plaza Cisneros with its dramatic feature of 300 light poles, meant to be a symbol of the transformation of the city. 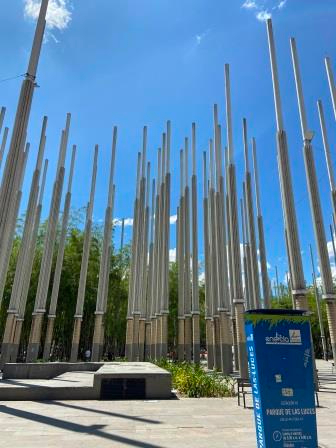 The Parque Berrio was busy with buskers and vendors and, perhaps most spectacular of all, the Plaza Botero was filled with sculptures by the city’s most famous artist: Fernando Botero. 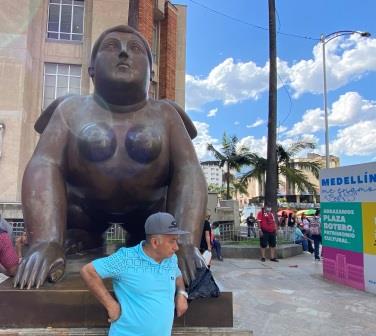 The square has quite a nice atmosphere, bounded on one side by Museo de Antioquia and Palacio de la Cultura Rafael Uribe on the other. 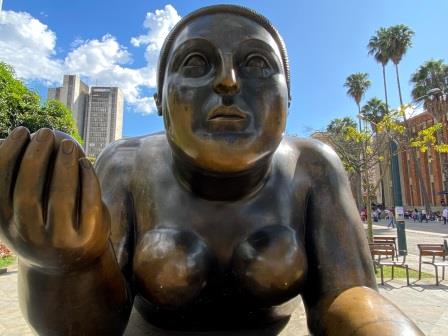 There are 23 statues in the square. They were donated to the city by the artist himself.  They are oversized and fun. 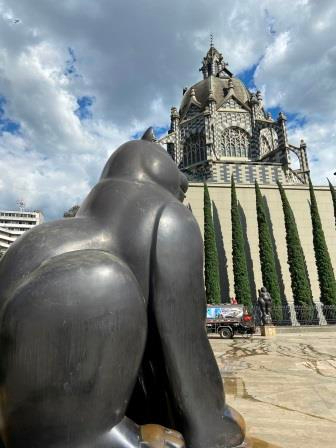 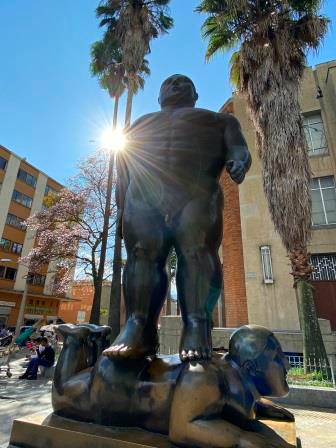 Medellín is the main city of the region of Antioquia. El Ferrocarril de Antioquia was a Colombian cargo and passenger rail network. Its construction began in 1874 but operations ceased in the 1960s.  The old railway is commemorated at what used to be Medellín’s main railway station. 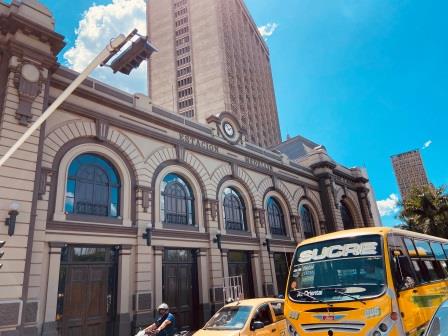 The station has now been repurposed for alternative use, but there is still a preserved steam locomotive on display.  We sat there admiring it for a while drinking coffee. 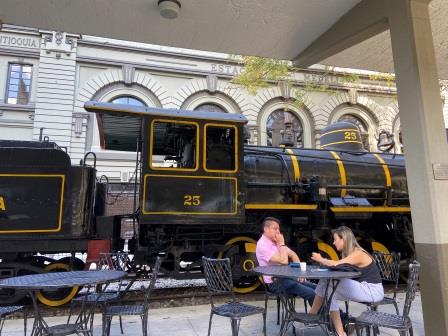 The track of the old system still lies dormant in some places, and there are now plans to rehabilitate some of it.  Until that happens, the metro will remain the only serious (there is a tourist train near Bogotá) rail passenger transport in the country. 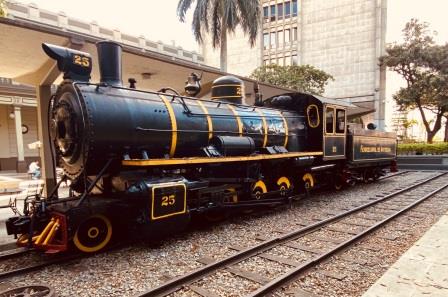 Just south of the commercial centre is Cerro Nutibara, an iconic hill surrounded by a park with hiking trails. We climbed up to the top to get a slightly different perspective of the city. 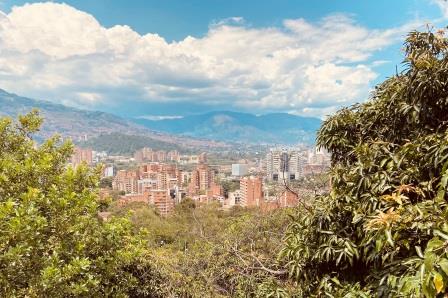 Pueblito Paisa, also at the top, is an interesting, if slightly kitsch, replica of an old Antioquian town complete with old church and colonial style buildings. 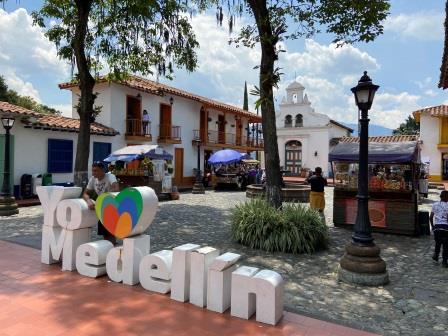 A little further south is El Poblado, theoretically the safest and richest neighbourhood in the city.  It certainly seemed to be the most expensive part of the city. 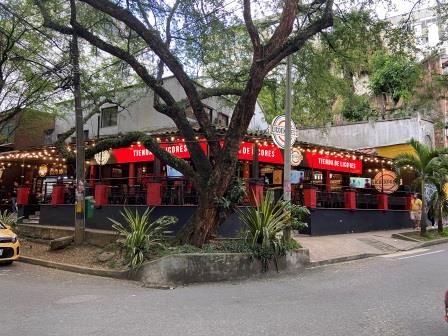 El Poblado is the favourite place for foreign tourists and expats, and its tree-lined streets are filled with high-end shops, restaurants, bars and nightclubs. 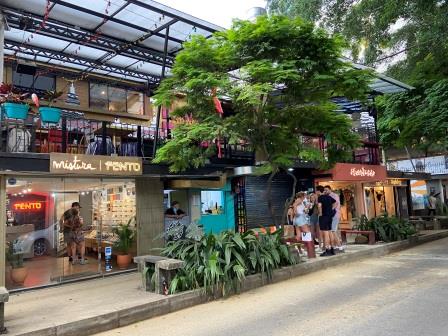 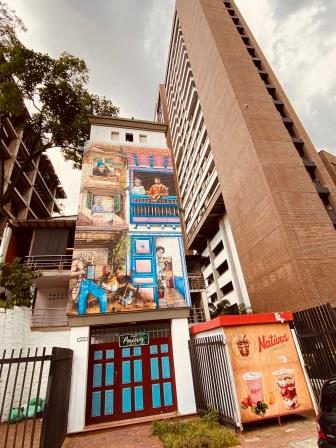 We returned to Laureles from the city centre on the Metro, alighting at Estadio (next to the large football stadium) station in the north of the district.   From our first trip on the system, we saw just how well the regulations on COVID were being obeyed: everyone was wearing masks. 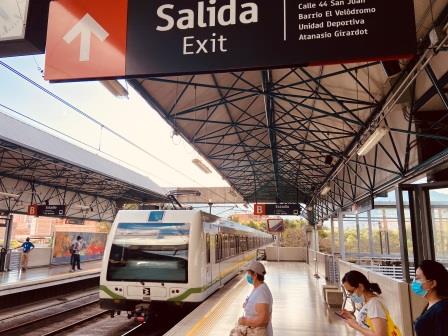 Although it has fared a lot better than neighbouring Peru, Colombia has still been hit badly by COVID, with an estimated 139,000 deaths (2,600 per million). By the time we visited it seemed that infections were on the wane, but it was clear that people were not taking any chances. 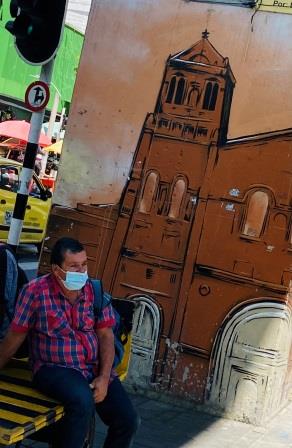 Everywhere we went, masks were being worn indoors by almost 100% of the people.  There were quite a lot of people wearing them out on the streets too.   When one of us forgot to put our mask on before entering a Metro station, we didn’t even get as far as the ticket barrier before being challenged by an employee. It was reassuring to see. 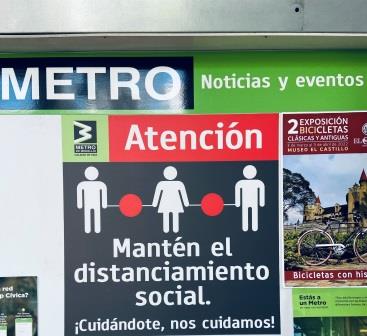