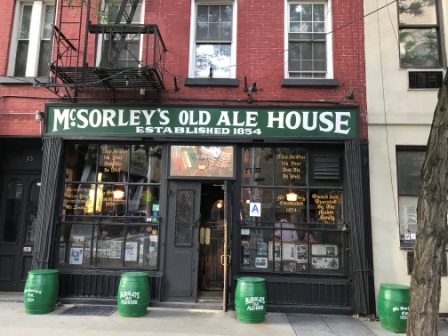 “What beer do you have?”

“We don’t have beer. We only have house ale, you want light or dark?”

The bar tender had said it quite abruptly and I thought, for a brief moment,  about pointing out that ale was actually a type of beer.

Now he was smiling though, so  I smiled back and I ordered a light ale.

This place was cool.  Whilst the bar tender was fixing my drink I looked behind him at all the old beer pumps, till equipment and assorted knick-knacks. The walls were filled with ancient pictures and posters too. The place dates from 1854 and it claims to be the oldest pub in New York.  Whether it is or not, It can’t have changed much since it opened.

It was popular too; it was already packed at 7pm on a Thursday night in April and I had only just managed to squeeze myself into a place to stand at the bar.  We were standing rather than sitting at the bar and that felt good too.

A few moments later the bartender slammed two 8oz mugs in front of me. I wondered if there had been a mistake.  I must have had a surprised look on my face because the guy next to me at the bar turned, smiled and said “that is just the way it is here; you order 1 beer and you get 2. Order 2 and you get 4.”

I looked along the bar counter and, sure enough, everyone had two glasses in front of them.  I thought about it and I reckoned it was a pretty neat idea. It was certainly quite unique. I said as much to my neighbour and he agreed.  “It is cheap here too” he added, “you don’t get this much change out of a $10 anywhere else”. 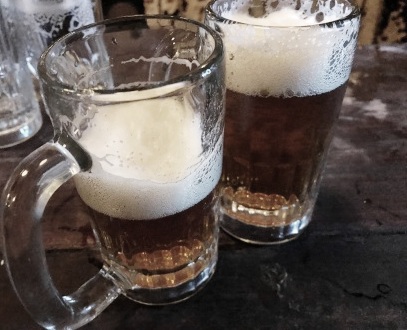 He wasn’t exactly a local but he told me he frequented the place whenever he was in New York. He explained he was in the business of selling power tools and that he was in Manhattan quite often on business.  He was originally from Richmond in Virginia but now lived across the river in New Jersey.  His patch was New York, Jersey and a bit of Connecticut.   I ordered another beer, the dark ale this time, and smiled to myself when I got two more mugs. 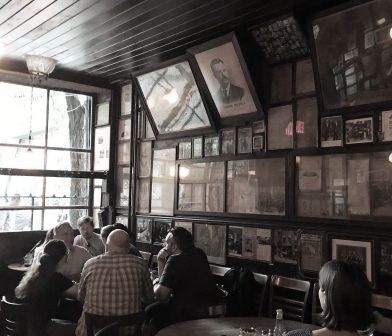 He must have been about my age, and he told me he had pretty much always sold power tools. He had worked for several different companies in his time, basically moving from competitor to competitor.  He’d worked for Japanese and Chinese companies too and he’d been out to both places.  He’d especially enjoyed Tokyo and we chatted about it quite a lot.

We moved from talking about travel to discussing politics and by then it was time for me to buy another round.  I ordered 2 more beers and we got 4.

It is such a fantastic name isn’t it?

We were chatting about the name of the pub.  It comes from a church clock located in Cork, hometown of the owner and manager.  Apparently, the four faces all show a different time !

He was a lawyer, specialising in corporate law, and on his way home from working close by. He was watching the Baseball game on the TV – Atlanta Braves against the New York Metz and he filled me in on the rivalry between the two teams and a little more about the history of baseball in New York in general.  We moved on, in between watching the TV, to law and eventually to politics; Trump’s chances for re-election to be precise.

We had to shout a lot of the time to make ourselves heard because although we were sitting together at a corner of the bar, the place was getting busier and busier.

The interior is pretty 19th century, tables made from mahogany, bare floor boards and panels and there are old Guinness pictures and posters all over the place. The bar is back lit and attractively presented. 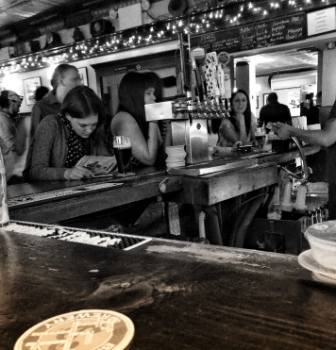 The four-faced liar is a great place to stop off in Greenwich village.  It is just around the corner from Union Square and very close to University of New York.

I have visited it a couple of times already in the early evening and it is always busy.  It is totally unpretentious and really laid back. 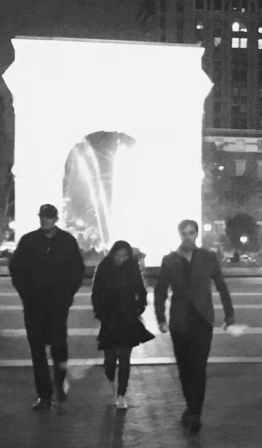 “If you would excuse me a minute, I just need to pop outside”.

“I will right be outside if you need me”

I told the bartender that it was not a problem at all and off she went.

I was left all alone; no customers and no bar staff.

To be fair to her, it was very early and the place had only just opened.   I could see her through the window and she wasn’t out there smoking either if that is what you are thinking.

She had poured me a lovely cold Guinness before she had gone and I sat there at the bar drinking it for a while looking around at the Late Late Bar.  Eventually I had a little wander around to get a closer look.

The place is named after the famous Irish TV chat show, (The Late Late show) and rather than being a traditional-style Irish pub, it is more of a bar with an Irish theme.

It is supposed to be modelled on a 1960s Irish home and is decorated with wallpaper from the period, parts of beds, sofas, bookshelves  and a little cupboard with cans of beans and packets of tea in them.  There are photographs and pictures on the walls to add to the atmosphere.

There was another food cupboard behind the bar and just to the left of it was a model of the Virgin Mary.    The whole effect was quite wonderful. 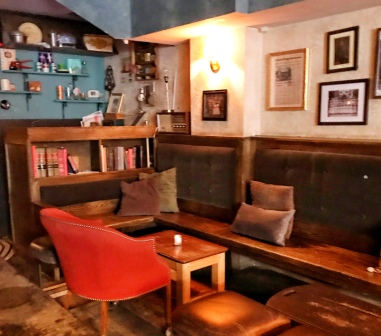 The bartender came back in and almost at the same time several customers arrived all at once. The place soon went from being totally dead to being busy in a matter of minutes.

I needed to be elsewhere, but I was impressed with my first visit to the Late Late Bar and I think I will return.

I said it because she had been looking at me with a scrunched up face which seemed to indicate her disapproval of my drink choice. To be fair though, she was also smiling.

“You are English?” she replied in a lovely Irish accent.

I quickly explained that the dry white wine was due to the low-carb diet I was trying to keep to.  I added that I meant no offence to the Irish nation or to the Dead Rabbit itself.

Sometimes voted the “best bar in the world”, this impressive pub boasts a collection of more than 150 Irish whiskeys and has Guinness on tap.  There is a large cocktail bar upstairs too. A glass of Italian wine is certainly not the most authentic thing to drink there.

It was a Friday night in July and as the Dead Rabbit is located in the heart of Financial District I had been lucky to get a seat at the long narrow bar.   It was heaving with people inside and out.

“He’s from Britain” she said to the American guy who she was sitting next to and had sometimes been  holding hands with.  He looked over to me and nodded, smiled and then went back to chatting to the guy next to him.

She was about 30. She was from Dublin and had been over in New York for 3 years. She was in hotel management and was working in a place just off Wall Street.  She explained the “he” was in banking and that they lived together somewhere on the Upper West Side.   We talked for an hour about her life in the city, my trips around the country and about the things she missed most from Ireland.  Eventually his friend left and the 3 of us carried on talking for another 2 Pinot Grigios at least.