At 8am the next morning I boarded the MV Arahura at Wellington docks. It was a modern ship and it made a very smooth crossing to Picton on the South Island arriving at 11am.

Straight off the boat I boarded the Newman’s bus for a journey through some beautiful scenery to Nelson.

I had travelled to Nelson because I was intending to do the famous Abel Tasman Track.  I spent the afternoon wandering around the town looking for information and supplies for my trip. I bought a hat, a metal plate and some freeze dried food before finding the youth hostel and checking in. 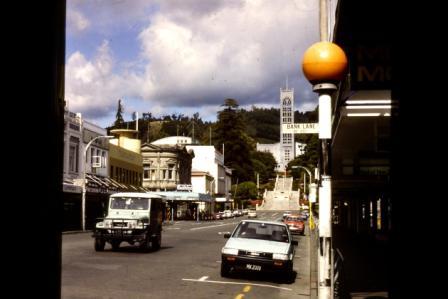 I hoped to be able to set off for the track the next day. The helpful warden didn’t have an awful lot of information on the track but he told me that “Fat Bob’s bus” would be leaving in the morning and I could get a place on that. He also agreed to keep my excess baggage for a few days until I returned and to lend me a billy can.

At 8am a battered old Bedford coach with a blue and white skyline mark on the side pulled up outside the hostel.   It was driven by a man fitting the description of Fat Bob. About 18 would-be hikers (we were to be known as trampers), including myself, climbed aboard and we set off towards Moteuka.   Bob was a good driver but It took us more than two and a half hours to reach the start of the trail.

From Moteuka the Abel Tasman trail stretches northwards along the beautiful coast line. It was named after the Dutch explorer who also gave his name to Tasmania. He charted this coastline back in 1642 and apparently he was attacked by Maoris on the way.   The trail is about 50km in length and it was supposed to take about 3 days to walk the whole thing. There were no hotels but basic huts were available to stay the night in. 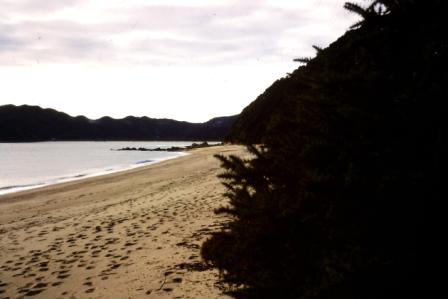 The other 17 trampers all started off together but soon spread out. I waited a while getting my gear and my thoughts together and then I followed. I kept a bit of a distance as I wanted to walk on my own. The coastal scenery was terrific and led from one secluded beach to another. The walking was relatively easy but it involved a bit of wading now and again. I stopped for lunch at Anchorage Bay and made it to Bark Bay by 5pm.

The huts were pretty basic; just 36 bunks gathered around a small wood fired stove with candles for light. Using the water from a nearby stream (it was all drinkable) I cooked dehydrated lamb, peas and potatoes and had it with some cabin bread and black coffee.

At 7pm people started to drift to bed but I joined a few Americans, English and Germans and talked outside until 9pm before retiring myself.

I woke up at 7:30am and made myself a little breakfast of bread, honey and coffee. The sun was just coming up as I set out again. I walked for most of the day alone in the direction of the next hut at Awaroa. It was, again, fantastic walking with continuing sandy, secluded beaches and little inlets to enjoy. Just before Awaroa I caught up with a West German guy called Andreas.

He was contemplating the final section. It was tidal and the tide was obviously coming in fast. We decided to go for it and, encouraging each other, we waded across as fast as we could. We held our rucksacks high up above our heads as the water rose above our knees.   We made it to the other side and celebrated our achievement with a dinner of mince, rice, cabin bread and coffee cooked on an open fire outside the hut.

I woke up at 7:30am and decided to set off again alone. I trekked again through some amazing coastal scenery for an hour or so before sadly coming to the end of the trail at Totaranui.   It was 9am and I was in the middle of nowhere.   But I knew I was being followed so I just lay in the field and waited.

After an hour or so there were six of us. That was enough for a minibus hire. Someone knew there was a phone box a mile down the road we all headed off towards it. We phoned a place called Bickley Motors and an hour later a battered old Ford transit minibus appeared. We clambered in the back and bumped and bounced our way back to Nelson.

Back at the Youth Hostel we were grateful to have all the modern conveniences of electricity, showers and proper food again. To celebrate our tramping triumph we 6 decided to go out for BYO meal in town.

We loaded up with Reineck beer from a bottle shop, got a table at Chez Eelco, a bistro near the cathedral, and had a lovely meal of hamburgers.  We were Jim and Fiona from the UK, Renee from the USA, Andreas from West Germany, and Matts from Sweden that evening.

We made it back to the hostel by 11pm just in time to watch the film Runners with James Fox on TV.

I woke up with a hangover but made it down for breakfast early enough. I chatted with two Swedish girls who were talking about hiring a car or a minibus for the next stretch of the west coast down towards Queenstown.

I thought about it whilst I was cleaning the shower as my chore and decided to join them. My thinking was simple; I didn’t want to miss the west coast but it was sparsely populated and could be difficult to hitch on. A shared vehicle would not be too expensive and would give us the freedom to stop where we wanted but probably complete the journey faster.

At the start we thought we could gather 10 for a minibus but the more it was discussed the clearer it became that only 5 of us could agree on a workable plan. We were Kevin, a Canadian wildlife expert from Edmonton who worked for the Canadian Fishing and Forestry Commission, Roy, an Englishman from Yorkshire who lived in the Home Counties but was having a two month New Zealand break, and the two Swedish ladies, Eva and Lota, who were both 19/20 years old and who had met whilst working in a paper mill back home and then saved enough money for a tour of Australasia.

After a bit of ringing around car rental agencies we settled on Budget Rental Car and we took them up on their offer of a Holden Commodore for a one way rental down to Queenstown.