Roughly ten months after our departure from Hebden Bridge we found ourselves heading back north once again. We had planned a series of three trips back to the Pennine Way over the spring and summer of 2017 and this was to be the first of them. The late spring Bank Holiday weekend gave the prospect of an extra walking day, but it also meant far more expensive train fares and a reluctant decision to travel up by car. 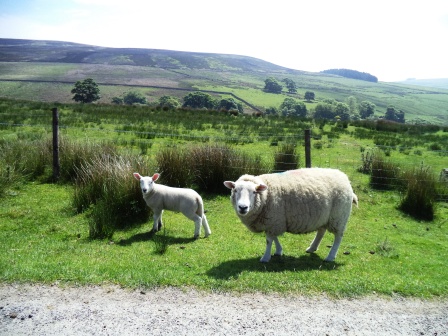 Although much cheaper, travelling by car gave us a logistical problem of how to walk in one direction and also move the car.

The solution was complicated.

We would overnight first in Burnley, leave the car there and then travel by early morning bus to Hebden.  After the 1st day’s walk we would bus back from Ickornshaw to Burnley. We would then drive that evening to our accommodation for the next two nights in Gargrave.

For the 2nd day’s walk we would travel back to Ickornshaw using a combination of train and bus and then spend the day walking back to Gargrave.

For the 3rd day we would walk out from Gargrave to Malham and then return by bus.

All went to schedule and after a night at a Holiday Inn in Burnley we arrived back at Callis Bridge at 9am on Saturday, 27th May. We immediately began the long and arduous climb up the hillside passing little cottages and hamlets as we went. The way was not so obvious, it was a series of zig zags up the hill, but we managed to navigate okay. Stoodley Pike was still clearly visible in the distance.

Before not too long we were at the top and making our way through bluebell-and-buttercup-filled fields to the ridge near Colden. We stopped for a break overlooking Colden Clough.

Halfway along the middle Reservoir we branched off and took the slabbed path towards Top Withins. The path was over the moor and felt quite remote at times. 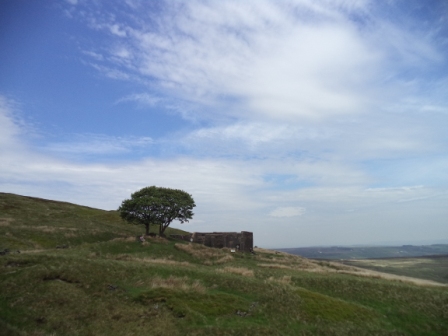 Eventually the ruined house at Top Withins came into view. This is rumoured to be the location of Wuthering Heights in the Bronte novel. The village of Howarth is just down the hill and a walk known as the Bronte Trail (signposted in Japanese) leads up from there and follows the Pennine Way for a while. We chose to have lunch at Top Withins. We were not alone and as we ate we counted at least another 20 walkers who had come up from Howarth to inspect the building.

The weather, which had been wonderfully sunny until now, began to change suddenly. Soon after we had set off again the sky went completely dark and it began to rain, then hail and finally thunder and lightning. It was a pretty violent and dark storm. On top of a hill was clearly not the best place to be. Luckily we were heading down at that point.

In the chaos of the thunder and lightning we missed the point where the Pennine Way turns off the main track and heads down to Ponden. We had been descending for about 10 minutes before we realised our mistake. By chance, we were able to confirm directions from two locals who happened to be heading up the hill (in a thunderstorm!) and were soon on the correct path again. 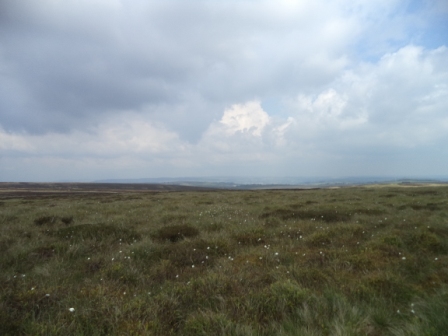 By the time we had reached Ponden Reservoir the sun had come out again. We managed to dry off as we skirted the reservoir and then began the long climb up the north side of the valley and out onto Ickornshaw moor. 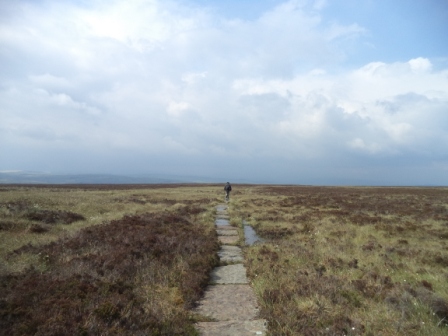 Some of the way across the Moor was back on the flagstones. It seemed to go on forever. The long gradual descent took us past several little wooden shooting cabins (we were in grouse country again) and eventually to the main road at Cowling.

The walk had taken slightly longer than planned, but we managed to catch the half past five bus back to Burnley.  After picking up the car at the bus station car park we were in Gargrave by half past seven. 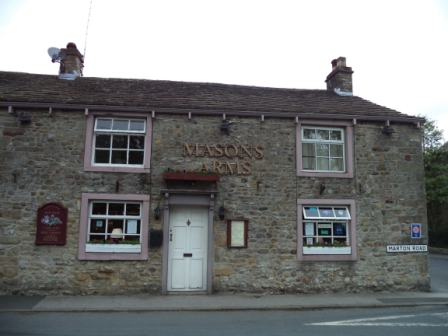 The Mason’s Arms in Gargrave was a great place to stay. The room, situated away from the pub, was quiet and comfortable. The pub food was simple but excellent. We enjoyed ham hock and local sausages on our first night and several pints of Wainwright’s beer.

We had a bit of a lie in on Sunday morning. We decided to forgo breakfast at the Mason’s and headed into the village instead. After picking up some sandwiches for lunch at the local Co-op we headed to the Dalesman Tea Room for cheese on toast and buttered tea cakes. The Dalesman is a bit of a PW institution and features in many of the guide books.

It has its own PW distance marker outside and it uses cups with the route printed on them. It is a quaint enough place and it doubles as a retro sweet shop, but we weren’t really that impressed with the service to be honest. Nevertheless the pineapple chunks and pear drops we purchased there kept us happy for the rest of the trip.

We were killing time in Gargrave that morning waiting for the first train out. It doesn’t leave until 11:20 on a Sunday so we spent time reading the Sunday papers whilst sitting on a bench overlooking the River Aire.  Finally we walked down to the little station to catch the Leeds train to Keighley. It was very crowded and we had to stand. After a walk to Keighley bus station and another bus ride we arrived back at Ickornshaw at 12:40 ready to resume the walk.

We went through the small hamlet of Cowling and up once again through fields of buttercups onto the higher farmland. 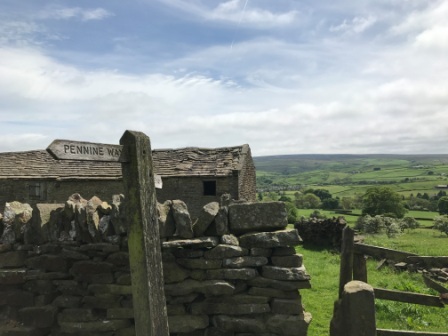 The weather was lovely and sunny again and after a stiff climb we dropped into Lothersdale. The village was laid out below us as we descended. We needed a lot of will power to walk past the pub in the centre of the village.

We headed through Lothersdale and paused for a late lunch before heading back up onto the moor.

After another 30 minutes we reached the summit for the day; Pinhaw Beacon. We had a 360 degree vantage point overlooking the surrounding countryside and, given the clear weather, it gave us the best views since Edale. In the distance to the west we could see Pendle Hill whilst to the north we could make out the distinctive shape of Pen Y Ghent – still two days walk away. 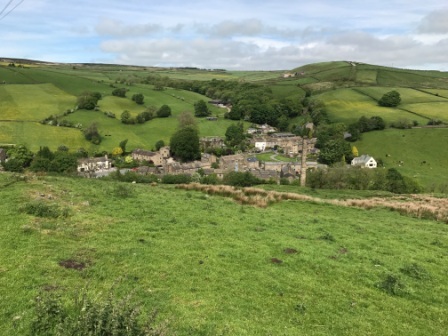 The descent into Thornton was gentle but it was also long and at times it was not that easy to follow. It took us through a few fields where the path was easy to lose. Eventually we arrived at Brown House Farm on the outskirts of Thornton. We followed a road into the village and we passed under the closed Colne to Skipton railway line as we did so. 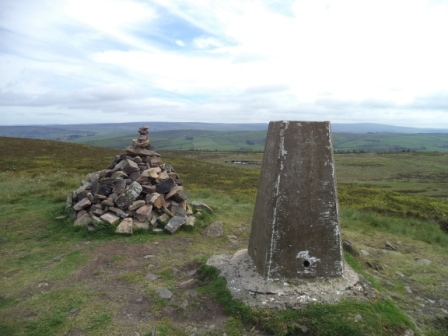 We passed quickly through Thornton. Then a gentle field system took us past cows and sheep up to the Leeds and Liverpool canal. We had a mile-long walk along the towpath until we came to East Marton and its distinctive double bridge. We had our afternoon break watching a barge mooring before leaving the canal and walking over another set of fields.

There were lambs everywhere and my wife kept stopping to photograph almost every single one of them. 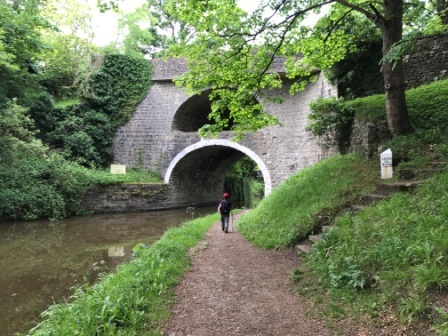 After about a half an hour we finally topped Scaleber Hill and had an amazing panoramic view down into Gargrave itself. In the distance we could see our pub and the thought of another pint made us hurry for the last few hundred yards. We made it back into the pub car park by ten past six. Not a bad afternoon of walking at all!

That night we enjoyed another excellent dinner; cottage pie and Yorkshire pudding at the Mason’s whilst chatting with an American who was doing the PW over about a month. He told us that he was moving slowly and stopping off a lot of places.

The next morning the weather was grey and miserable and rain seemed to be almost guaranteed. Bolstered by an excellent breakfast at the Mason’s, and having moved the car to the central car park, we set out again. We bought a little picnic from the Co-op and headed out of the village towards Malham. 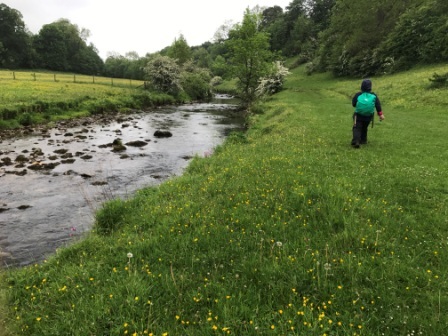 This promised to be an easy 6 miles and I assumed navigation would be easy. We headed past Gargrave Manor (For Sale) and along a farm track. We paused to photograph some cows peering over a broken fence. It was only 10 minutes later when we reached a barn along the path that we realised we had missed our turning.

We decided to turn around and head back. We went all the way back to the Manor (For Sale) when we met a lady who directed us correctly. We turned back again and finally we found the footpath opposite the cows. The sign was in some heavily overgrown bushes and easily missed.

We headed uphill across fields full of more cows, calves and lambs with my wife taking lots of photographs again.   We descended into the Aire Valley and picked up a pleasant grassy riverside path through Airton to Hanlith.

It really started to rain as we passed through Airton but we donned our waterproof gear and carried on regardless. We met a fellow wayfarer in Hanlith. He was a Geordie lad from Newcastle and was moving very slowly almost as if he was injured. We talked to him a while he was obviously struggling and doubting himself whether he could finish. We left him behind and carried on.

Eventually after almost 3 hours walking from Gargrave we crested a hill and got a really splendid view down to Malham.

With Malham now clearly in sight we headed quickly down the valley and into the village itself. We met a lot of day trippers heading out from the Car Park as we did so. We had made it to the Buck Inn our PW goal for the day and for this second trip.

Although we had finished with the Pennine Way for the day we were not yet done walking. Without much of a pause we headed along the little B-road that leads from Malham to Gordale Scar.

Gordale Scar is one of the most stunning limestone features in England. It took us about 30 minutes to do the 1.5 miles up to the Scar itself.

The Scar made an excellent picnic location. After a tasty lunch and a little look around we headed back the way we had come to Malham. We bought take-away warm drinks from the “Muddy Boots Welcome” café and sat drinking them while we waited for the sole afternoon bus back to Gargrave.

By ten past three we were back at the car.

We then had a miserable, long and very wet drive home all the way through Bradford and then along the A1.   We certainly missed being on the train !