“We won’t be meeting again on the Slow Train.

Apparently, the song’s omission of the “and” from Littleton & Badsey (1853-1966) was down to an error in the original Guardian article.  I think it sounds better without it anyway.

Opened by the Oxford, Worcester and Wolverhampton Railway, the station is one of two in Worcestershire and was located halfway between the two villages that it claimed to serve.  It is on a route that is still open to passenger traffic; the “North Cotswold Line” that links Worcester with Oxford and London Paddington.

The X on the map shows the approximate location on the current British railway network.  The nearest open stations are Evesham 3.3 miles and Honeybourne 4 miles.

Back in 1962 the station had a weekday service of around 15 trains, many of them heading to or from Stratford (or even Birmingham) over the now-closed line via Honeybourne.  Stratford was around 30 minutes away whilst Evesham could be reached in just 4 minutes.

Today there are buses linking the area around the old station to Evesham in 20 or 30 minutes.  Given the low population in the surrounding area and the proximity of two other stations not far away it is not too surprising it closed, and there must be little chance of it ever reopening.

The station site was very easy to find just next to the automatic barrier level crossing on the B4085. Although the road goes between Littleton and Badsley and the level crossing  is also named after the old station, the area here is called Blackminster. 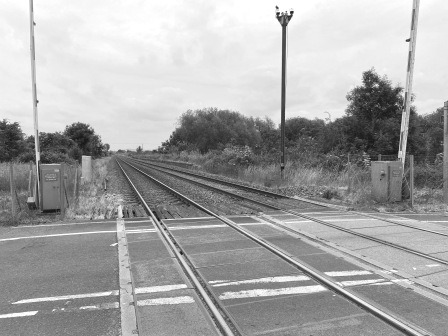 The station used to be located on the east (London) side of the crossing and there were still the remains of a bit of platform on the down line.

We walked over the crossing to the north side where there was quite an interesting collection of buildings.   They used to be linked to the line by sidings and they were built by chocolate maker George Cadbury as a fruit canning factory.

Today they are marketed as the “Blackminster business centre” and leased to local businesses. We got coffee at the little railway-themed “fast tracks” café in the centre and then continued north towards the Littleton village. 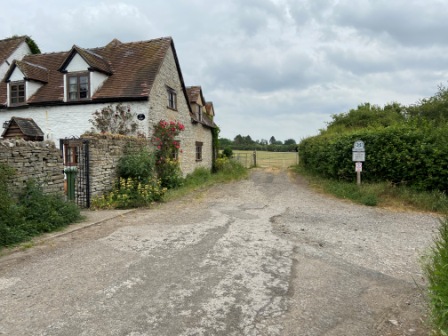 A little further up was the National Trust-owned Tithe Barn. The barn, Grade 1 listed, was created in the 13th Century and served as a place where produce, given to the church as a form of tax by locals in exchange for social care and education, was stored.

Next, we retraced our steps all the way back to the level crossing.  It closed just as we were approaching, and we managed to see a London-bound train pass by.

We went over to the south side and then followed the road around to Badsey.  It was quite a way, but eventually we came to a pub called the “Round of Gras”. 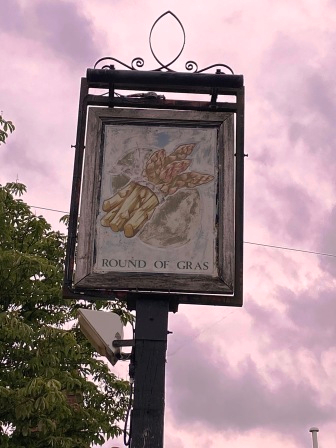 The pub sign was evidence of the area’s connection to asparagus growing.  There were tools used for the cultivation of the vegetable inside, and apparently there are still asparagus auctions sometimes held there.

After a quick  look at Badsey, we decided to make a wider tour of the area before returning to Evesham.

We went first to Bretforton where the 15th century Fleece Inn, another National Trust owned property, stands in the centre of the village surrounded by other dwellings, many of them thatched.

A few miles further on we passed into the largest “Area of Outstanding Natural Beauty” in England and Wales; the Cotswolds.   Famous for its quintessentially English villages with settlements built from honey-coloured stone, it is always a joy to explore. 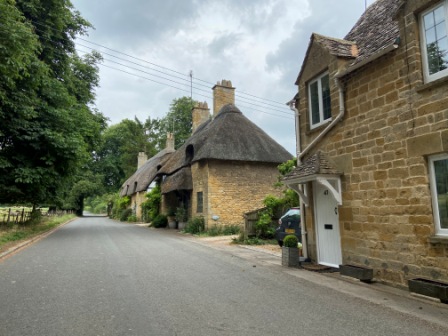 Eventually we returned to Evesham.  The little market town is certainly worth a few hours’ exploration; we ended our visit with a nice walk along the River Avon before heading over to the railway station. 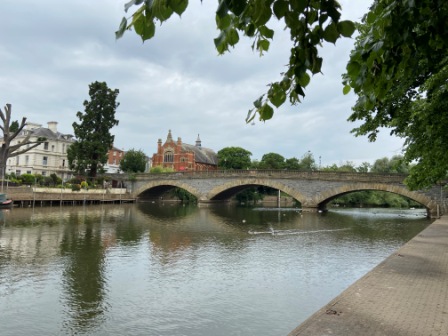 Evesham station seemed to be nicely kept and was well served by trains heading up to Paddington or down to Hereford. Considering it is only 3 miles away, perhaps the residents of Littleton and Badsey have not fared too badly.