Kirby Muxloe (1848-1964) falls into a second category of stations closed in the Beeching Plan: it is on a line where the stations were all closed to passengers but the track itself was retained for freight use.

The station, the only one in the song in Leicestershire, was opened by the Midland Railway and was situated on its Leicester to Burton line.

The X on the map shows the approximate location of the station in relation to the current British Railway network.  The nearest open station is Leicester 4.4 miles away. The approximate position of the retained freight line mentioned above has been added as a thin black line. The disused north-facing junction at Leicester is shown in red.

Back in 1962 the station had around 9 trains a day running to Leicester in 10 minutes and to Burton in 50.  Today there is a bus service running every 20 minutes but taking around half an hour to get into the centre of Leicester.

There has been a plan to reopen the whole line for several years. There are a few barriers though; the line is currently served only by a south-facing junction at Leicester, the north-facing one, needed to link to Leicester station, is lifted and could be difficult to reinstate; there are also issues of capacity at Leicester.

Nevertheless, in early 2020 the plan received new impetus under the “Reversing Beeching” initiative, so things might be moving closer.   If it happens, there is a chance that Kirby will be rebuilt or at least a station will be placed close by.

The station site was easy to find at a level crossing on an unmetalled road named Station Drive.  The only slight confusion was the number of roads in the area with “Station” in the name: there was “Station Close” next to “Station Drive” and both led from “Station Road”.

The station used to be located on the east side of the crossing but there was nothing at all left now.  The track has also been singled here but it sees plenty of use by freight trains heading to and from quarries further west.

Station Drive led across the line to just a few houses on the south side.   The crossing was just a user worked affair: no automatic barriers here.   Nevertheless, it seemed to have been recently modernised and looked in excellent condition.

After a little wander along the footpath that led south, we turned round and went back over the crossing. We turned left into Station Road heading for the village.

Kirby is effectively a “village suburb” located just five miles from Leicester city centre.  It grew rapidly when the railway arrived and as we walked up Station Road, we saw some attractive old houses that must have dated from the time when the line opened.   Today Kirby has around 4,500 residents.

We turned right from Station Road and walked into the heart of the village.  There was a little post office and quite an attractive array of stores surrounding it. The Royal Oak was the village pub and although it was closed due to COVID when we were there, there was quite a large farmers’ market doing good business in the car park.

Further up from the centre was the Castle Hotel, which apparently dates from the 17th century.  It looked quite an attractive place to stay, and it seems to have some good online reviews for its food too. 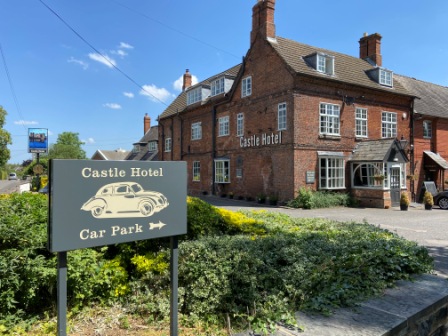 Kirby Muxloe’s big surprise was its stunning moated castle.  It was almost hidden at the back of a modern housing estate.  One minute we were walking past suburban semi-detached houses; the next we were looking at a 15th century ruin. 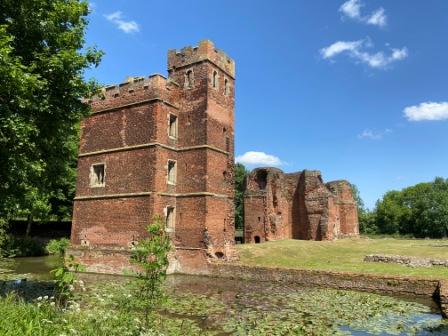 Effectively a “fortified mansion”, the castle was built for a Lord Hastings, but it was never really finished. It is still impressive though; it has a completed tower and an imposing gatehouse.  Apparently, Hastings himself was executed in 1483.

The castle is currently owned by English Heritage, and although it was possible to pay to enter main part, we chose just to walk around the moat and view it from that perspective.

It was a beautiful morning, and the atmosphere was lovely and tranquil.  There was hardly anyone else there and we just had the ducks and geese for company. 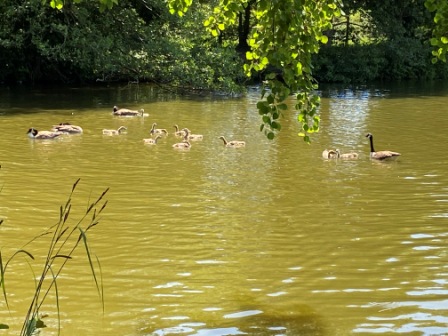