Return to Tokyo & living in Saitama

I returned to Japan in early July 1988.   I flew back on KLM. I went first to Amsterdam and then on to Tokyo via Anchorage in Alaska. In those days European airlines didn’t have over-fly rights for the Soviet Union so the flights went west from Europe into Alaska. After a stop there to refuel the flight continued down towards Japan.

The airport at Anchorage had become quite adept at handling the masses of transit passengers en route to Asia, and the shops there did a roaring trade in packets of salmon and polar bear dolls.

Back in Tokyo I stayed for a few nights at Kimi Ryokan in Ikebukuro and went back to the routine of teaching at ACA in Shinjuku.  In mid-July I moved to Shimo Kitazawa, just outside Shinjuku, and did a flat sit for 6 weeks.

Shimo Kitazawa was a small, lively suburb just outside Shinjuku.  The flat itself was great.  Tim had a VCR and he had loaned me his membership card for the local video store; Dorama.  Tokyo entered the rainy season and the heavens opened. I spent a lot of July and August at home watching videos.

For the first time in my life I was living totally alone and, I must admit, I quite enjoyed  it.  I spent a lot more time studying Japanese, reading and cooking for myself.

The only downside with being on my own was when the frequent little earthquakes happened.  I didn’t like them at all.  The flat was old and wooden and it rattled quite a bit at even the slightest tremor.

Possibly related to this  I started to have more panic attacks.  I had had my first panic attack back at Marui House, when I had thought it was a heart attack, but now they increased more.  Eventually I developed a mechanism of going outside and breathing slowly, but they never completely went away.

Just before Tim was due back from Asia I found another place to live.  Gill from my Japanese class told me that a room had become available in the house that she shared with Malcolm, her boyfriend,  and Tom, another Australian teacher who I got on well with. She asked if I would like it and I jumped at the chance.  I moved directly there from Shimo Kitazawa in early September.

It was in Warabi. Technically this was outside Tokyo to the north in Saitama-Ken, but really it was all part of the same conurbation. It was quite a way out though, and the school-to-door transit time was well over an hour and a half. It meant commuting in on the Keihin Tohoku line train. It was a line that I eventually came to hate.

The line, whose trains were coloured a pale blue, ran up the east side of the Yamanote line and then north towards Omiya in deepest Saitama. The trains stopped at all stations and it took a long time to get to Warabi.  Some nights, when I just wanted to get home, the journey just seemed to go on forever.

The house was about a 15 minute walk from Warabi station. It was a relatively old Japanese-style home. I had a single room on the ground floor, Tom was upstairs in another single and Malcolm and Gill shared the double upstairs. Once I was home I couldn’t really complain as it was a nice atmosphere. We all got along fine and Malcolm had a skill for picking great alternative films to watch together on the VCR on Sunday nights.

There was little to do in the local neighbourhood but it didn’t really bother me. I was desperate to improve my Japanese.  I quickly settled into an intensive routine of waking up, studying alone in the morning, going to Japanese class in the afternoon and then teaching in the evening.

In late October I moved to teaching at the newly-opened Akasaka School and the commute became a little easier. The atmosphere at the new school was better too. It was smaller and more intimate. I was an old hand by then and I was often engaged in instructing the new starter teachers.  Akasaka also offered us a good repertoire of bars for Friday night fun. The selection included the “crazy duck bar” where we became regulars.

Despite all this, the time in Warabi is probably the period I spent in Japan that I remember with the least affection. I missed the early spirit of discovery I had enjoyed with Andrew and I didn’t yet have the stability that came later. I missed Aiko too and it was only towards the end of my stay in Saitama that I formed a new liaison with a Canadian girl called Hannah.

The period was, however, marked by three highlights:

In August 1988 I joined some others from the Akasaka School and climbed Mount Fuji. Climbing Mount Fuji was real fun and I am really glad I did it. 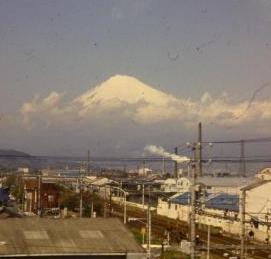 We set off on a Friday night after work. We all caught the train to the foot of the mountain, and then continued by bus to the highest point accessible by road.  At about 10pm we began climbing and we climbed all night. We were amazed to find that there was actually a queue to get to the top.  There were literally thousands of Japanese attempting the climb. 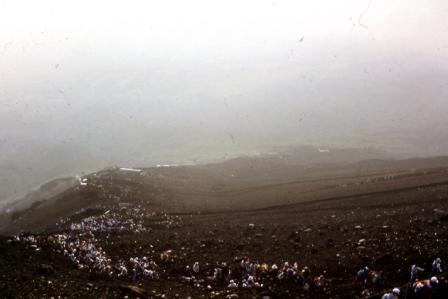 We arrived at the summit just before sunrise.   We then watched an amazing sunrise and afterwards we had breakfast on the summit.  The meal included hot coffee from the vending machines that they have up there.

If we had thought climbing up Fuji was the best bit, we were wrong. 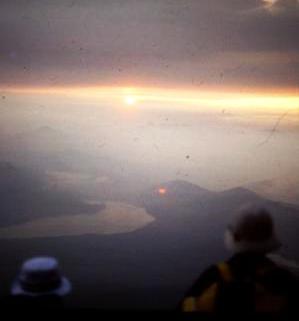 The best bit was the descent. 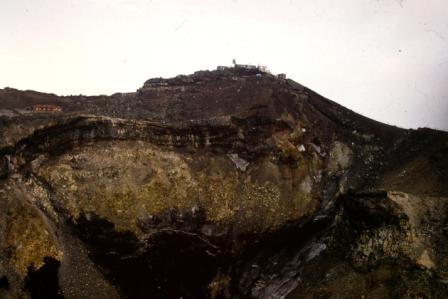 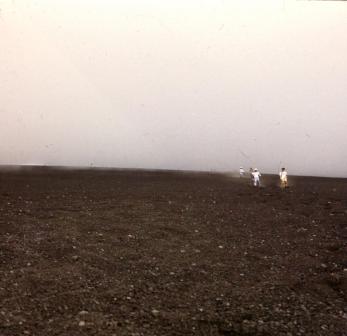 We just ran down through the volcanic ash. It was quite easy to run on the powdery surface.  First we were running above the cloud, then running through the cloud and then finally out of the cloud with a clear view of the land below.

We didn’t stop running until we were quite low down. It was an unforgettable experience and something I have never really encountered anywhere since. 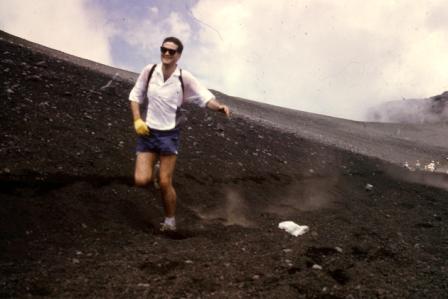 Then in October I made a long weekend trip by myself to Nagano. I spent a pleasant couple of days hiking in the countryside around the city. On the last night I stayed in a ryokan in Nagano itself.    The ryokan had one of the old nose cones from the zero series shinkansen mounted outside the door. This was a sign of the owners’ loyalty to the JR tourist company over the years.

The middle aged couple who ran the ryokan were ultra friendly to me.  They told me that they were keen for me to meet their son.  He was the same age as me,  working in a bank in Tokyo and just home for the weekend. After they had cleared my breakfast away they introduced him. 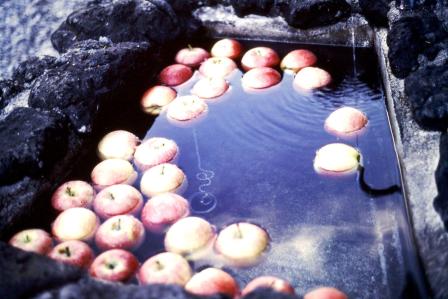 “Jun” was a great guy* and we quickly became firm friends. We travelled back to Tokyo on the Asama express train later that day.  We went drinking in Tokyo a few times and then he invited me back for another trip to Nagano in November to stay with his family.

The second time I was on the floor in the sitting room and not a guest in the hotel.  I was still made to feel extra welcome. We hiked up to an onsen and bathed alongside monkeys in the bath and ate fresh apples that had been floating in a well. 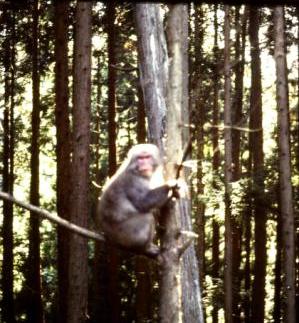 Finally, in December 1988 I flew home to the UK again (out on KLM and back on Thai via Bangkok) and met up with Andrew for a memorable New Year’s Eve trip to Scotland that we both still talk about even today.

Whilst we were in the UK Emperor Hirohito died and his son, Akihito, succeeded him. He named his reign “Heisei” which translates as “enlightened peace”. When I returned to Japan the dates had suddenly moved from 64-01 to 00-01. It was if time had begun again and we were now back in the year zero.

I had had enough of teaching English. The teaching was okay but it was not what I wanted to do permanently. What I wanted to do was to get enough Japanese to enable me to get a job back home using the language. What I was aiming for,  I already knew, was to become involved in some kind of business that spanned both the UK and Japan.

I had accumulated enough savings to enable me to concentrate more on learning rather than teaching.  I made the decision that I really had to get out of Tokyo and go to a smaller town where my Japanese would improve quicker.

In the Japan Times I found an advert for something called “Experience in Living Internationally”. It offered a one month home stay with a Japanese Family in places a long way from Tokyo. I actually wanted more than a month, but a month was a start.

You couldn’t choose the place to live but you could choose from a list of shinkansen lines. I knew that the Sanyo Shinkansen ran between Osaka and Fukuoka. It was far enough away from Tokyo to mean I wouldn’t be tempted back.  I ticked that box.

In late January 1989 I received a letter telling me that I had been accepted. A month-long home stay had been arranged for me in Yamaguchi Ken 1,000km to the west of Tokyo. I was to travel to Tokuyama on the Sanyo Shinkansen and then take a local train to a place called Hofu. The letter gave me the train times and said that my “home-stay father” would be waiting for me at Hofu Station at 17:25 on February 18th.

I gave in my notice at ACA, said goodbye to all my friends and on the morning of February 18th I made my way to Tokyo Station to board the Hikari 103 express heading to western Japan.

My third experience of the Shinkansen was far better than the first two.  I was in a great mood; I was leaving Tokyo and I was looking forward to a  month off work, meeting new people and seeing new places.   It took about 6 hours to reach Tokuyama and I enjoyed every minute of it.  I went for lunch in the dining car and then watched out of the window as the urban sprawl of Tokyo, Nagoya and Osaka slowly gave way to the more sparsely populated countryside in the west.

I changed at Tokuyama and arrived at Hofu bang on time at 17:25.