New York to Chicago by train

The phrase “give someone the red carpet treatment” was not, as many believe, originated by Hollywood.  It was actually made popular by a railway company.

The use of red carpets to honour people goes back into ancient history, but it was the New York Central Railroad that first used the custom in the modern era. It was something that Hollywood and others soon copied afterwards, but it was the railway that pioneered it.   The New York Central always laid out a red carpet along the platform to welcome passengers onto its most famous and most luxurious train; The 20th Century Limited.

The 20th Century ran from 1902 until 1967. It linked New York with Chicago and completed the 959 mile journey in less than 16 hours. It departed New York’s Grand Central Terminal at 6pm each evening and arrived at La Salle in Chicago the next morning at 9am. The train made use of the flat “water level” route along the River Hudson and Lake Erie to help maintain its high speed.

The 20th Century went through many phases of re-equipment in its 65 years. it was streamlined in the 1930s and then dieselised in the 1940s. It had a strong claim throughout its existence to being the most famous train in the world.

Although the train’s clientele included many famous film stars, often on their way via Chicago to Los Angeles, perhaps its two best remembered passengers were fictional. Roger  Thornhill and Eve Kendall, played by Cary Grant and Eva Marie Saint, rode the train together in Hitchcock’s 1959 masterpiece “North by Northwest” and the real train was used for the filming. The movie includes Grant’s wonderful line “It beats flying doesn’t it?”.

Unfortunately the 20th Century itself couldn’t beat the airline competition and by the late 60s, deserted by its rich clientele, it was gone.

When the nationalised concern Amtrak took over most of the US passenger rail business in the early 1970s it continued to use many of the historic names for its long distance trains. However, no one even considered insulting the memory of the 20th Century, so Amtrak’s New York to Chicago service was given the name of an earlier slower train “The Lake Shore Limited” instead.

The Lake Shore still departs New York every day for Chicago and more or less follows the route of the 20th Century Limited.  In 2005 we used the train as the first part of a trans-continental train journey from the east coast to San Francisco.

We flew to New York by American Airlines and stayed at the Art-Deco-styled, but slightly run down, New Yorker Hotel right opposite the departure station of “The Lake Shore Limited”. 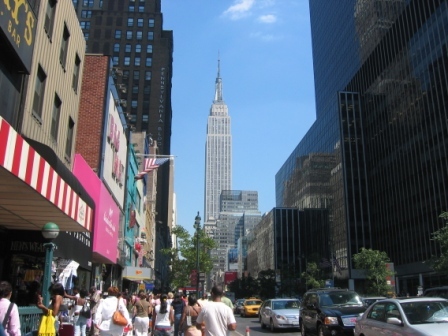 This was our first visit to New York after the tragic events of September 11th 2001, and so we made a visit down to the sight of the former World Trade Centre. We also took the Staten Island Ferry to Staten and back (it is free) and thought the sight of lower Manhattan without the twin towers was very sad.  The fact that London had just suffered its own terrorist atrocity just a few weeks before made it all seem even more poignant. 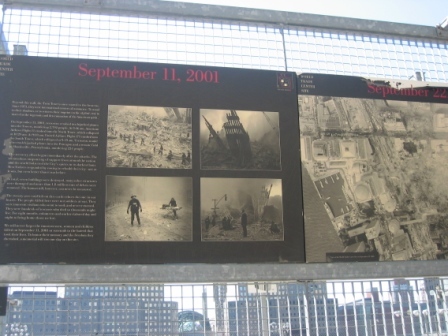 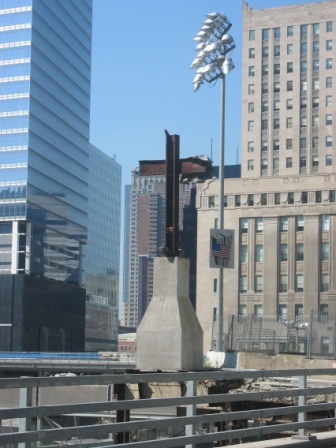 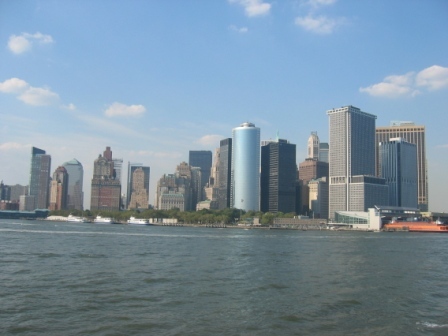 Unlike the “20th Century”, “The Lake Shore” doesn’t depart from Grand Central Terminal; it leaves from the subterranean Pennsylvania (Penn) Station instead. This is quite rational as it concentrates all Amtrak’s services on one of New York’s two main Stations. It is also a bit sad because Grand Central is one of the world’s most beautiful stations and it would be a much more apt place to begin the long journey to Chicago. 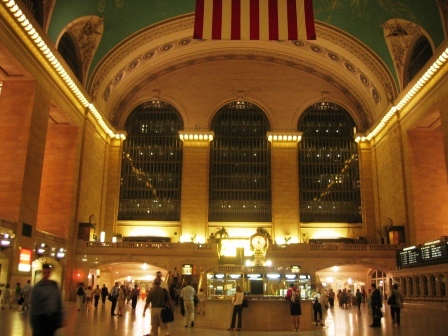 As a little tribute to the old train, on the evening before our departure we went over to Grand Central Terminal and had a lovely seafood meal at the famous Oyster Bar that sits on the lower level. The station is just magnificent and it is a real shame it now only acts as a commuter terminal albeit a very busy one. 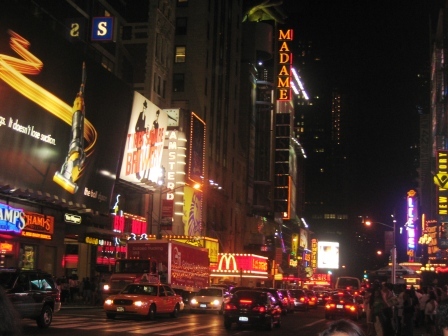 The next day we descended into the depths of Penn Station to board our train. Penn Station used to be quite grand like Grand Central, but the main station buildings were demolished in the late 1960s. The complicated concourse and the platforms were essentially buried under a modern skyscraper. It was not a nice place to linger despite the fact that as sleeping car passengers we were allowed to use the lounge.

At times over the years there has been talk of a plan to reuse the nearby Post Office (which also sits over the tracks) as a new station.  It certainly looks the part.

The Lake Shore, which is scheduled to take just under 20 hours for the trip, was due to leave at 3:40pm. We sat and waited in the lounge until just after 3:10pm when the train was called and we made our way down to the platform.

We found our sleeping car  from the number on the ticket and we were shown to our little compartment by the friendly attendant. The Lake Shore uses “Viewliner” sleeping coaches. These are smaller than the “Superliner” double deck coaches found further west because the eastern routes are more constrained and need slightly smaller rolling stock.

Our duplex compartment was set up for day use. There were two seats facing each other with the corridor door on one side and the window on the other. Later on the two seats would be brought together towards each other to form the bottom bed, and then another bed would be lowered from the ceiling. It was a little odd, but it actually meant you wouldn’t be jolted sideways when the train braked during the night.

After several calls of the atmospheric “All Aboard” from the conductor, the train left at 3:40pm on the dot.

Most other trains leaving the west side of Penn station enter the Hudson river tube and head for New Jersey, but the Lake Shore made an immediate right turn, wheels screeching as it did, and headed north along the western side of upper Manhattan.  It continued on this former freight line for several miles before finally meeting the main “20th Century” route out of Grand Central. It then headed north along the east bank of the River Hudson.

The River Hudson remains very wide for many miles upstream and the views across to the west bank are extremely scenic. The train hugs the shore all the way as it makes its way through the inner New York suburbs of Yonkers,  the outer suburbs as far as Poughskeepie and all the way up to the New York state capital of Albany.

It is on this stretch in North by Northwest that Roger is seated opposite Eve in the dining car of The 20th Century Limited.  The Hudson can been clearly seen in the background as he  sips a Gibson cocktail and she makes indecent proposals to him.

On the Lake Shore Limited the Amcafé didn’t actually have any cocktails so I made do with a can of Coors Light. I drank it and looked out of the window whilst the wife sat there and read a book.  The experience was not quite as romantic as the film perhaps, but the scenery was certainly the same.

At Albany the Lake Shore from New York met another portion from Boston and after a bit of shunting the two set off again towards Chicago as one train. The train now had a dining car and Amtrak described it as a “heritage” diner. This was code for “old” and it meant basically that, unlike all the other carriages on the train, it predated Amtrak and probably originated from the 1950s or 1960s. It was comfortable enough though and we had a light meal in there for dinner.  Sadly they didn’t have any Gibson’s either.

Back in the compartment the attendant quickly made up the beds and we both fell asleep soon after the train had passed through Rochester NY around 10pm.   We slept remarkably well, possibly due to the jet lag, although we woke up early just after 6am as the train was pulling into Cleveland, Ohio.  I remembered that I had once watched the Lake Shore pulling into Cleveland one early morning back in 1986 whilst waiting there for a bus to Buffalo. 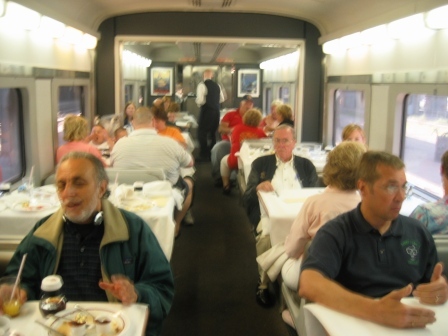 We went back to the dining car and had delicious breakfasts of railroad (French) toast, bacon and hash browns washed down with lots of freshly-made coffee. We chatted to a couple at breakfast and, as we travelled between Cleveland, Ohio and Toledo, Ohio, one of the things we told them was that the best way to say good morning in Japanese was Ohayo which was pronounced in the same way as the state we were passing through. They pretended to believe us, but I don’t think they did.

Eventually we went back to our compartment to tidy up and make preparations for getting off. The train took its time though and passed slowly from Ohio into Indiana and then finally into Illinois. The scenery became more industrial as we went west.   At last, and about 30 minutes late, we arrived into Chicago’s impressive Union station at 10:30am. 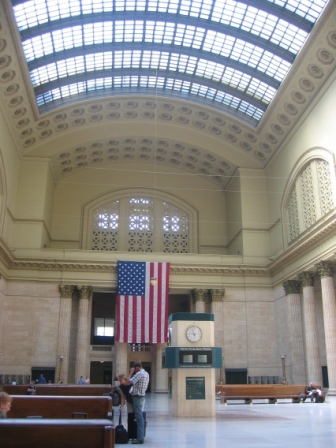 “The Lake Shore” had been a good experience.   Okay, It hadn’t exactly been the “20th Century Ltd” of course and we certainly hadn’t received “Red Carpet” treatment, but we had eaten reasonably well and we had slept well.  Now we were almost a thousand miles further west.    I thought it beat flying anyway.

We had decided to forgo an immediate connection on that afternoon’s train to California and had instead opted to spend the night in a Chicago hotel.   We found our lodgings near the station and then spent the afternoon and early evening wandering around Chicago. We had deep pan pizza back in the room and got another early night. 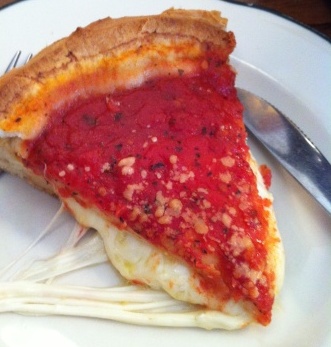 The next day we spent a very lazy morning relaxing and then, after another brief walk around the centre, made out way back at Chicago Union in time for the 1:50pm departure west; ““The California Zephyr”.