Trips to Devon and Cornwall

In 1904 the Great Western Railway decided to find a new name to give to the fastest express on its London Paddington to Penzance route. The enthusiast publication “Railway Magazine” (founded in 1897 and still going strong today) held a competition to find a name. One of its readers came up with “Cornish Riviera Express”.

The name conjures up images of going on holiday in Cornwall. It was extensively used for publicity in the 1930s on posters that often featured  green steam locomotives hauling the GWR’s chocolate and cream passenger coaches past beaches filled with holidaymakers.

Since 1904 the “Cornish Riviera Express limited” has left Paddington for Penzance at around 10am. The name has continued through nationalisation, dieselisation and re-privatisation. It is still in use today and is one of the few original train names to actually survive in the UK.   The train has normally been the fastest train on the route and it still is today. The 10:06 departure reaches Plymouth in 2 hours 59 minutes and Penzance (305 miles) in 5 hours and 5 minutes.

The route from London Paddington to Plymouth and on to Penzance is one of my favourite train journeys in the world.  I have been lucky enough to travel along it many times. I have used the Cornish Riviera Express a couple of times but have usually preferred later trains because they have had dining cars.

In 1924 the Great Western Railway offered a book “Through the Window” as a guide on what to see on the way down to Penzance. British Rail offered a leaflet with similar information in the 1970s.

Here is my own modest and very brief offering on the subject.

We board our service, an Intercity 125 High Speed Train, at one of London’s most beautiful stations; Paddington.

The first part of the journey is the fast bit. The train reaches 125 mph as it speeds towards Reading passing over the River Thames along the way.   Watch out for superb cutting at Sonning just before Reading (10:33).

The original Cornish Riviera went to Penzance via Bristol (and some services still go that way today) but in 1906 the Great Western linked up a series of railway lines across Berkshire, Wiltshire and Somerset to make a more direct route from Reading to Taunton saving 20 miles.

Because the first of the lines was the “Berkshire and Hampshire railway” the whole line between Reading and Taunton got the unofficial label “Berks & Hants” even though it went  nowhere near Hampshire.

The train turns sharp left just after Reading to enter this line and then heads towards Newbury. The going is a little slower now, 110mph in places, and it is about 20 minutes before we pass Newbury Racecourse. We play hide and seek with the parallel Kennet and Avon Canal for the next stretch.

All the way along between Reading and Taunton we pass through some wonderful English countryside. As we make our way through Wiltshire and into Somerset don’t forget to look out for the white horse on the side of the hill near Westbury.

Just before Taunton the train rejoins the traditional route from Bristol. The mileposts still measure the original route, but don’t be deceived and remember that you will need to subtract 20 from them to give the true distance you have travelled.

After Taunton we thunder up Whiteball bank to the tunnel at the top. In 1904 this bank was the site of one the world’s first ever claims for a steam locomotive (City of Truro) attaining 100 mph.

We enter Devon in the tunnel and soon after we have the pleasure of watching the traffic on the parallel M5 motorway struggling along as we relax in comfort.  If it is summer the traffic might even be at a near standstill.

Just before Exeter we cross the River Creedy at the picturesque Cowley Bridge Junction. This is a notorious flood site that sometimes disrupts the trains.

Our train makes its first stop after Reading at Exeter St Davids (12:10).

After Exeter we follow the River Exe as it heads out to sea. Powderham Castle is also in view. At the end of the estuary we head through Dawlish Warren and out on to the sea wall.

For the next few miles we hug the shoreline. The view from the left side is the English Channel. In winter the sea can be rough and the waves can even hit the train. In summer it is pretty idyllic with the “bucket and spade” crowds visible on the beach.

The train threads through a series of tunnels carved through the sandstone until we pick up the estuary of another river, the Teign, and then head back inland.

After Newton Abbot (12:31), junction for the famous Devon resort of Torquay, the train works harder than it has during the entire journey as it climbs one of the mightiest banks in England; Dainton. We can hear the train almost breathe a sigh of relief as it enters the summit tunnel.  We then head down to picturesque Totnes.

Now we skirt the edge of Dartmoor and after another climb and descent we finally arrive at Plymouth (13:05).

Soon after departure from Plymouth (13:11) we pass over one of Brunel’s engineering masterpieces; “The Royal Albert Bridge”. 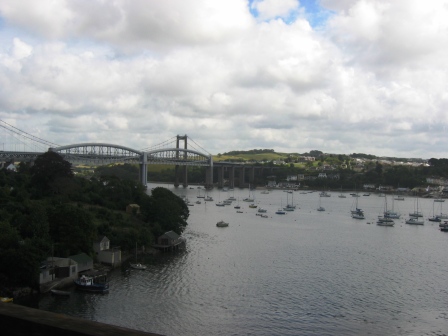 The speed is never much about 50 mph now and we stop at several stations in quick succession. Many of these stops are junctions for the little branch lines (past and present) that were designed to take customers towards the various holiday resorts on the coast. Among them is Liskeard (13:36) and Par (14:01) for Newquay.

After a while we stop at the only city in Cornwall; Truro (14:27).  The old main line here actually went straight on to the port & resort of Falmouth.   Falmouth is classed as a branch now but it is still the “main” line to Penzance that has to turn off to the right after Truro.

We head through Redruth, past ruined Cornish tin mines and finally to our last intermediate stop at St Erth (15:01).

St Erth is the junction for one of Cornwall’s most loved resorts; St Ives. In the 1950s The Cornish Riviera Express used to convey a large portion for St Ives in summer as more people were heading there than to Penzance.

St Michael’s mount can be seen on the left as we come into Penzance.  Our train heads along the shore and then terminates just short of the town centre (15:11).

We now have the chance to explore the town, go out to Lands End, head off to the Scilly Isles or just turn around and get the last train back to Paddington.  It leaves at 17:42.

I have a close friend in Plymouth and have visited him many times using the train. We have also visited many parts of Devon and Cornwall together. I have also toured the area myself on several other occasions. Here are just a tiny selection of photographs of trips around beautiful Devon and Cornwall. 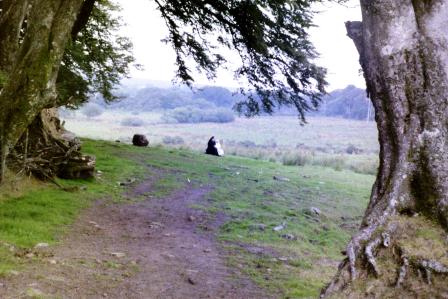