Sandwiches in the city of brotherly love

Most British people will be familiar with the idea of Philadelphia cheese. The product may not be as popular in the UK as it is in the USA, but most people have certainly heard of it.

However, if you mention a “Philadelphia Cheese Steak” in the UK you get mostly blank stares. If people try to guess, some may speculate that it is a piece of steak with some Philadelphia cheese spread on it.

Known more commonly as a “Philly cheese steak”, it is in fact a sandwich which is made from sliced pieces of steak covered with melted cheese inserted in a hoagie bread roll. It was developed in the Italian district on the south side of Philadelphia in the 1930’s by an Italian American by the name of Pat Olivieri.   His shop, “Pat’s King of Steaks” is still there.

Philly cheese steaks are available all over the US and you can now even find them in London if you look hard enough. I first tried one on my first visit to the USA in 1986 and had had several since. To be honest I had never really been that impressed. When I told people this they said I should really try one in Philadelphia itself.

In 2011 I had a spare day layover in New York and so I decided to take the train down to Philadelphia to have a look around the city and test the sandwich theory.

Philadelphia is about 90 miles south of New York and it is on the main “North East Corridor” train line running between Boston, New York and Washington. I have done the journey a few times heading to Baltimore and to Washington.

The train departs from Pennsylvania station in Manhattan, passes under the River Hudson in a tunnel and emerges into the marshland in New Jersey.   There used to be a station here to change the electric tunnel locomotive to a steam one for the rest of the journey south. That station was known as “Manhattan Transfer” and the name was made more famous much later by the band.

Today the train is all electric and it passes through Newark, goes past Newark airport and then through a series of commuter towns before crossing into Pennsylvania and arriving at 30th Street terminal.

I emerged into the beautiful concourse at 30th street, another one of America’s great stations, and got a map and a magazine from the information kiosk.

I headed straight out to the south of the city to find Pat’s King of Steaks. It wasn’t difficult to find and there was even a faux national heritage sign outside to indicate this was the place the cheese steak was invented.

There was quite a queue (“a line” as the locals say) outside but I waited patiently. To pass time in the queue I read the instructions displayed on how to order the sandwich. They amounted to two things: first there was a choice of cheese, American, provolone or cheese wizz; and then there was the choice of fried onions “with or without”. To order you just said things like  “one Wizz with” or “one American without”.

On the advice of other people in the queue I decide to go for “wizz with”.  I practiced saying it, but when it got to my turn I lost all my confidence and just asked for one sandwich.  The server was then forced to ask me about cheese and onions.

After I had been handed my “wiz with” I noticed the little area for condiments to the side. I saw that there was a whole tub of bell peppers and that you could add some to the sandwich. I added a few peppers and it turned out to be a good decision. It was certainly the best cheese steak I had ever eaten.

Whilst I was eating my food I noticed that there was an almost identical cheese steak shop on the opposite corner. It had a long queue too. The sign said “Geno’s”. I thumbed through the Philadelphia magazine and found that Genos was almost as famous as Pats. There was an ongoing argument as to which one was actually the best.

To be honest, there are many more cheese steak shops in the town and there are lots of arguments that suggest Pats and Genos are the most famous two but neither is the best.

Nevertheless, I vowed to try Genos next time I was in town and see for myself.  I then spent the rest of the day walking around Philadelphia before catching the train back to New York.

It was to be 5 years before I got the chance to try Geno’s.

In late 2016 I needed to visit a customer in Philadelphia and the timings meant that I would have a layover in the city.   I had to fly to Philadelphia from Las Vegas and as I was on my way to that airport I struck up a conversation with the taxi driver. I told him where I was heading and by coincidence he told me he was from Philadelphia.

After I had given him his tip I decided to ask him for his opinion on Geno’s and Pat’s. Before I could he suddenly said “Can I give you some advice?” “Sure” I said. “Get yourself to Reading Terminal Market and have a pork sandwich from Di Nics, you will not regret it.”

I was sceptical and decided that I would probably ignore him. Yet, I was also curious about what he had said, so whilst I was waiting at the gate to board the aircraft I googled “Di Nics”.   It turned out that they had won the Travel magazine award for the best sandwich.  The award was not for the best in Philadelphia but in the whole of the USA.

It seemed that the roast pork sandwich was a kind of sub-culture in Philadelphia. The tourists knew all about the cheese beef steaks, but the locals knew about the pork too. Di Nics were the experts in the pork.

I decided I needed to change my plan.

The next day I went to Reading Terminal Market at around 11am. It was located right in the centre of downtown of Philadelphia and was housed underneath a former railway terminal. The market is one of America’s classic food markets and is on a par with Pike Street in Seattle or Chelsea Market in New York. I wandered around the various stalls with their mouthwatering array of things to cook later and things to eat there and then.

I spotted the queue for Di Nics before I saw the stall. It was only just past 11:30am but I still had to wait about 20 minutes to get served. The signature sandwich was roast pork, provolone cheese and broccoli rabe. Almost everyone was ordering the same thing. I got one myself and took it out to a bench outside.

What can I say?   The roast pork was cooked to perfection and it melded with the melting cheese perfectly, The whole thing was dripping in the meat juice flavoured with spices and then you had the tasty broccoli thing going on as well.   It was “sandwich heaven”.

I went away completely satisfied. I walked around Philadelphia for the next 5 hours contented. I went back to some of the sights I had seen five years earlier and also to some new ones. I walked fast as I needed to use as much energy as I could. I needed to work up an appetite.

My walk ended with a quick saunter through the Italian neighbourhood on the south side and then, at about 4pm, I joined the queue outside Geno’s.    After about 15 minutes I reached the counter. This time I was ready.  “One wiz with” I said in my best American accent. I was handed the sandwich, I added the bell peppers again and then dug in. 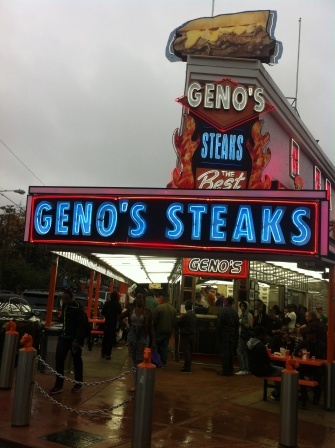 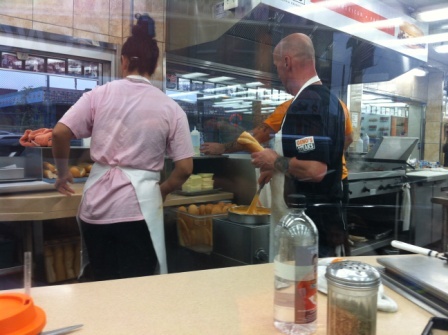 I sat looking across at Pat’s.  Some people sitting at the next table were actually discussing trying Pat’s next time and I joined the conversation and I told them I had eaten both of them. 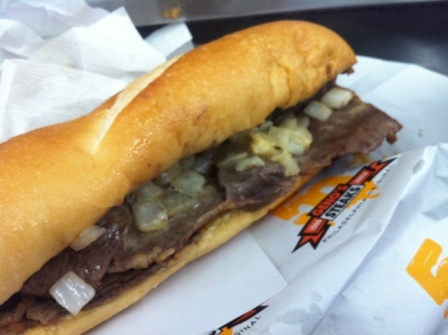 “So which is best then?” they asked.

“Well to be honest, it is five years since I had Pat’s so I can’t really remember,” I said.

They looked quite disappointed.   It was a silly answer, I knew, but it was the truth.

I thought for a minute and then said  “Do you like Pork?”

Whichever sandwich is best, there is no doubt that Philadelphia is a fantastic place to visit. There is a wealth of historical stuff there including the Liberty Bell, the Museum of the American Flag and a fantastic world-class art gallery with a real Japanese house rebuilt on its second floor. As I found, it is also a great walking city and great just for a big wander around. There are pubs, shops and of course there is also “Reading Terminal Market”. 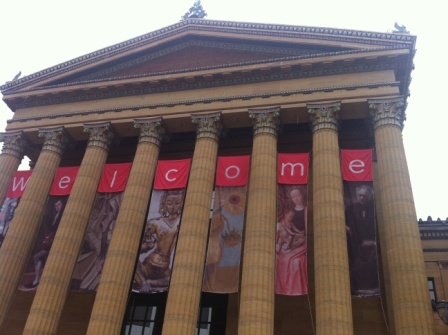 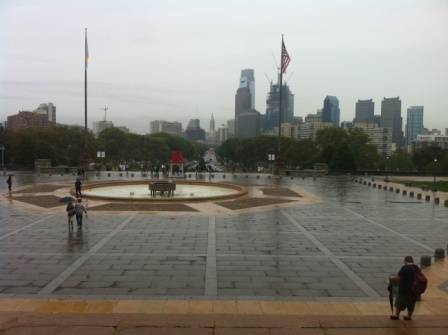 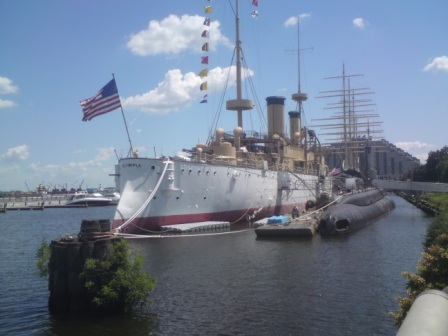