On a weekend in August 2015 we  travelled to North Wales for a couple of days of walking. It was part of a trial run for the 2nd part of the Coast to Coast walk that we aimed to complete the following year. We wanted to test my wife’s endurance walking long distances, and also to test whether I would be able to carry all of our supplies in a single large rucksack.

We travelled to and from Marylebone Station in London. The choice of route was a little unusual but, as we were able to avoid Virgin’s inflated prices, it made for quite a cheap trip to Wales.

On the Friday night we sat on the crowded commuter express to Birmingham Moor Street and enjoyed a little picnic from M&S that included plenty of wine.   There is something very pleasant about a long distance train leaving London on a Friday night. Everyone always seems to be in a good mood. On that particular Friday we noticed we were not the only ones on board drinking wine.

After 2 hours of sunny Oxfordshire and Warwickshire we had arrived at Moor Street. We  walked over to our hotel opposite New Street Station. We had a nightcap in the bar and got an early night.

The next morning, Saturday, we were up bright and early and across the road into New Street Station ready for our departure soon after 8am. We got bacon rolls and coffee from the station buffet and took them onto the train.   The train was a through train to Pwllheli in Wales.  It would take about 5 hours to get there.

The first half of the journey was through pleasant scenery as the train passed through Shrewsbury and headed west into Wales.   Soon after the stop at Machynlleth the line turned north and then hugged the Cambrian coast for the rest of the journey.

It was a delightful trip. There was non-stop coastal scenery and we stared out of the window as we passed beach after beach. The weather was gorgeous and there were lots of holidaymakers on the beaches obviously having fun.

We had another train picnic and we reached the end of the line, Pwllheli, just after 1pm.

We were following the Wales Coast Path; a relatively new path that, when considered in conjunction with the Offa’s dyke border path, means that Wales is the first country in the world to have a footpath encircling it. 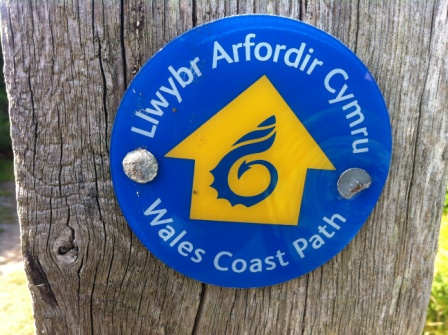 The path took us along Pwllheli beach and via a series of inlets and coves towards Criccieth. There was a bit of inland walking here and there but most of it was on the beach.

Despite it being the height of summer the place seemed almost deserted and we met hardly anyone the whole afternoon. We made good progress and finished the 13 miles to Criccieth by the early evening. 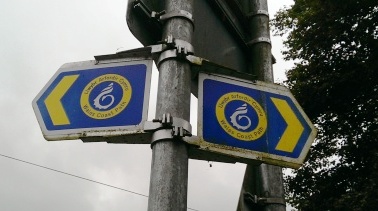 We checked into a hotel there but I won’t name it. The room wasn’t actually that bad, but we had some of the worst food I have ever had in my life there.   We had tasteless sausages with powdered mash and watery thin gravy. It was truly awful.

The breakfast the next morning was not much better.

To make matters worse it was raining a bit outside.

We made our way out again and picked up the Welsh Coast path once more. 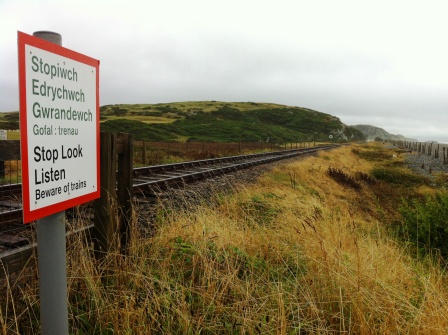 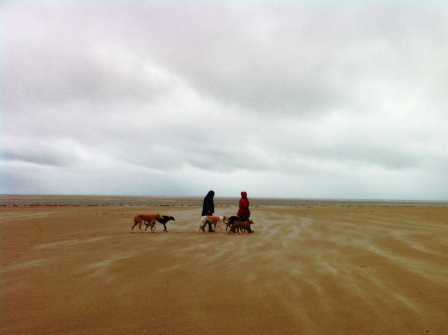 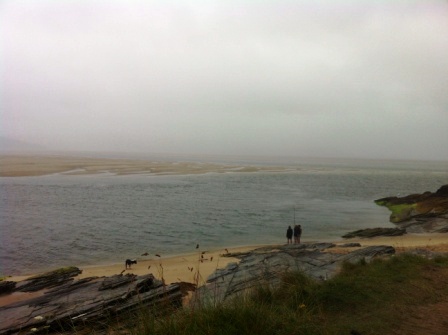 We followed it all the way around to Portmadog and paused there in the Ffestiniog Railway cafeteria for lunch.   We were staying in Portmadog that night so I dropped off some of my stuff at the hotel. Then we headed out across the causeway (the cob) for the second half of the walk. 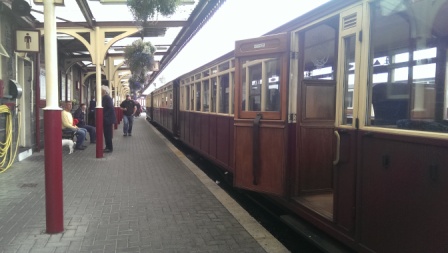 The Welsh Coast Path follows the Ffestiniog railway for the first few miles of its journey from Portmadog.

This part of the walk is mainly in the woods.  The walk through the trees was actually quite welcome as it was still drizzling a little bit. We followed the path all the way up to Tan-Y-Bwlch.  We crossed the railway a few times in the process.   We terminated our walk at Tan-Y-Bwlch station having walked about 17 miles for the full day.

We waited at the little Ffestiniog railway station for the last steam train back to Portmadog.

The food in the Portmadog hotel was a world away from the night before. We had some good hearty Welsh fare and a fair bit of the local brew to wash it down with. We slept soundly.

The next morning (Monday) we checked out of the hotel and headed back to the Ffestiniog station. This time we boarded a train on the Welsh Highland Railway (a subsidiary of the Ffestiniog) and headed north along the recently restored line to Carnarvon.

The Welsh Highland is a narrow gauge line stretching 25 miles from Portmadog on the west coast, around the foot of Snowdon and then to Canarvon on the north coast.  The trains are hauled by steam locomotives that used to work in South Africa.   It was a wonderful trip and the scenery was fantastic.

We found some delicious fish and chips for lunch and ate them sitting on a bench overlooking the sea and the famous castle.

From Canarvon we caught a bus to the rail head at Bangor and thence a train all the way along the north coast of Wales to Chester, south to Wrexham and finally to Shrewsbury. We changed at Shrewsbury for a train back to Birmingham and we made it back to Marylebone for about 8pm.