Crossing the most famous bridge in the balkans

We started our journey towards Bosnia with a ferry trip across the mouth of the Bay of Kotor and then, after almost touching the Croatian border, we headed inland from the town of Herceg Novi in a taxi.

The driver of our Toyota Prius was certainly of the “Yugoslavia Nostalgia” persuasion.  He was about  50 and so he fitted Dragan’s demographic too.  As we climbed for about 20 miles on a series of zig zags overlooking Herceg and the Adriatic beyond, he explained he was a native Montenegrin Serb born in the old capital Cetinje but that now he viewed his own country as being a banana republic.

All of the ex-Yugoslavian states were banana republics he said.   “So you regard Slovenia, Croatia, Serbia, Montenegro, Kosovo and Macedonia all as banana republics then?” I asked.   “Not Slovenia”, he said, “Slovenia is a proper country, and not Kosovo, Kosovo is part of Serbia”.   I left the question of Kosovo alone but I asked him why Slovenia wasn’t included in his definition of banana-ism. He replied in two words: “more Germanic”.

This exchange set the tone for the rest of the three hour trip to Mostar.   As he paid the toll for the mountain road he claimed that it was all corrupt and said “All the money goes directly to the president of the banana republic”.  As we stopped at the Montenegrin exit post he said “There is a border but it should be one country. This is a crazy banana republic”.  When, after a few miles of “no-man’s land”, we stopped again at the Bosnian entry post, our driver joked with the immigration guard and then as he handed our passports back to us he smiled and said “This is another banana republic”.

Although the entry stamp in our passports said “Bosnia” the signs at the frontier had actually said “Republic Srpska”.  This was because for most of the next two hours we would be passing through the autonomous Serbian Bosnian republic, one of two that were set up as part of the Dayton peace agreement.  Only just before Mostar would we enter the other republic: Bosnia. 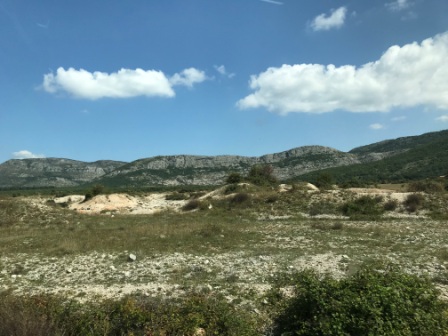 The scenery changed dramatically as we descended from the mountains into wider plains. Our driver opened up more on his nostalgia for Tito, for the country he was born into and he expressed his great sadness at its passing.

He used the state of the fields we were passing as further proof.  In Yugoslavian times the crops had been more bountiful and the local tobacco industry had been prosperous. Now it was all state subsidies and Bosnia was a net importer of food.  “It is a banana republic”, he added.  I wanted to say “but without bananas” but I didn’t. 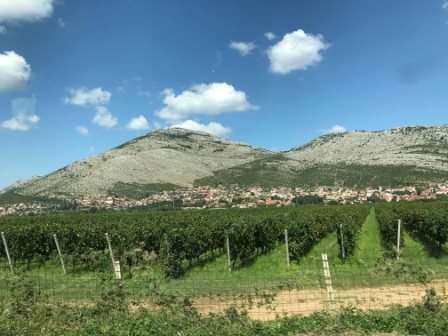 Despite, or perhaps because of, all this, we warmed to the driver and we asked if we could stop for coffee and chat more.  He found us a lovely roadside stall selling coffee, fruit and produce and parked the taxi.  We sat there for half an hour and turned the conversation briefly from politics onto food. We bought some jams from the lady owner who, via the driver, explained she was Serb first and Bosnian last.   We paid her in Euros as there had been no chance to change money to Bosnian Marks (known as Konvertible Mark or KM).

Back on the road we passed through a series of villages displaying Serbian flags that had Orthodox churches at their centres.  Then we passed through another one that had a large Catholic church and a collection of Croatian flags flying along the roadside.  The latter got the driver’s attention and he said “They allow foreign country’s flag in a crazy banana republic”.

As we came closer to Mostar we finally entered the country’s other autonomous republic: Federation of Bosnia and Herzegovina, and as we did we noticed that the villages we were passing through now had mosques instead of churches.

Minarets now dotted the horizon and it was almost shocking to see that the contrast between the Serbian part and the Bosnian part of the country was quite so obvious and so stark.

We finally arrived in Mostar at 2pm. Our driver got a little lost so we had an interesting bonus tour of the city into the bargain.  Finally he deposited us in front of the hotel, unloaded the luggage and wished us a happy stay.   We wished him a safe trip back to Montenegro.  I resisted the urge to shout “banana republic” as he left us. 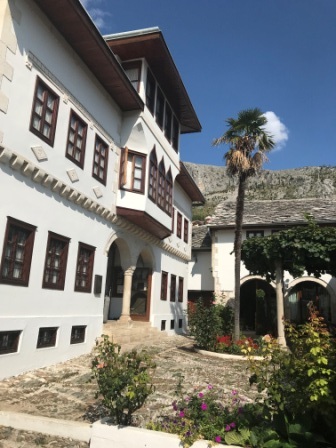 The hotel we had chosen for Mostar was the Musilbegovic House.   The building is a national monument and dates from the late 18th century.  It is one of the most significant examples of Ottoman residential property in the whole country and is also a tourist attraction and museum. 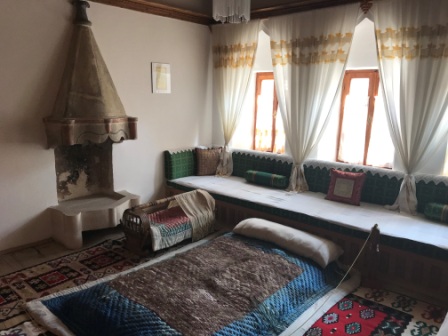 We were welcomed into the courtyard and served a welcome drink before being shown to our room.  It was all beautifully preserved and very relaxing. 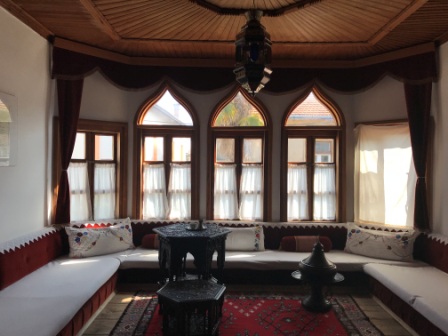 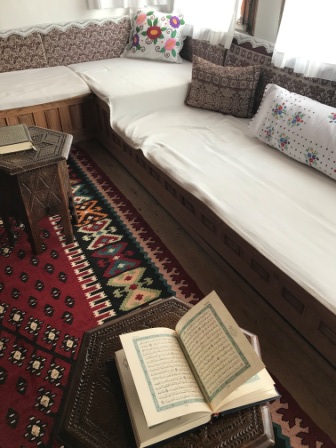 On the same theme, we visited another older Ottoman House, Kajtaz House, nearby.  This one dated from the 16th century and had even more artifacts.  It is UNESCO listed but still in the original family. We got there just before closing time but still received a very personal tour from the owner. 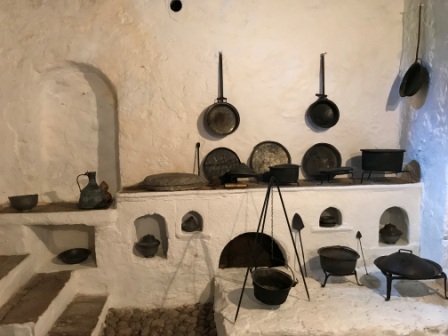 We spent the rest of the afternoon exploring Mostar. We visited a couple of mosques and walked down to view, inevitably, the bridge that gives the town its name and fame.  The old town certainly retains its Ottoman influence and it felt a lot like Turkey in places.

The 16th Century stone bridge is every bit as beautiful as the photos suggest.  Unfortunately it was the week of the Red Bull diving completion and they had erected a small diving platform in the middle of the span which spoiled the view a little bit. 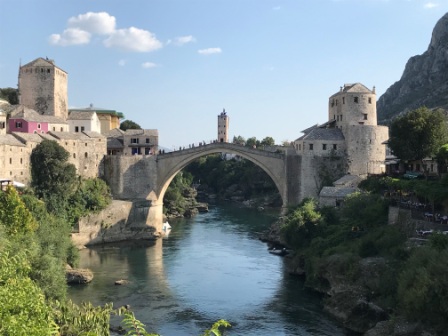 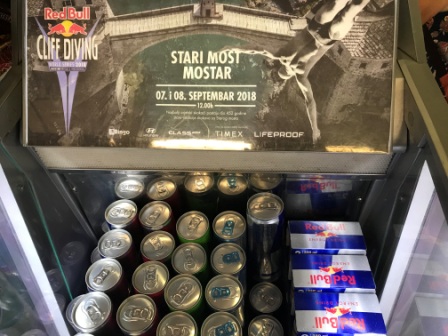 Walking back to the hotel we had our first encounter with the aftermath of the Bosnian war.  Some of the buildings around the Spanski Trg had not been rebuilt and their charred structures served as a powerful reminder of the conflict in the mid 1990s when Bosnian Croatian forces shelled the Bosnian Muslims as they laid siege to the city. 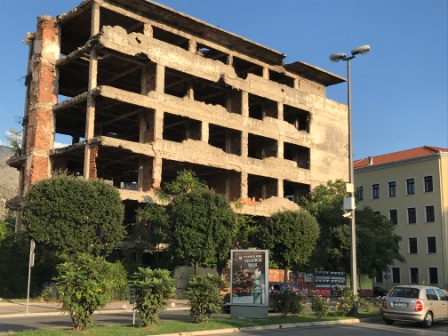 We learnt more about the siege of Mostar in the fascinating, if harrowing, “Museum of War and Genocide Victims” in the centre of the town.

In the evening we returned to the vicinity of the bridge for a bite to eat. My wife was constantly on the lookout for “rolled cabbage”. It was actually on every menu but, as the waiters explained, it was a winter dish and not available yet.  We did find Pijeskavica; a wonderful form of hamburger filled with tasty melted cheese. 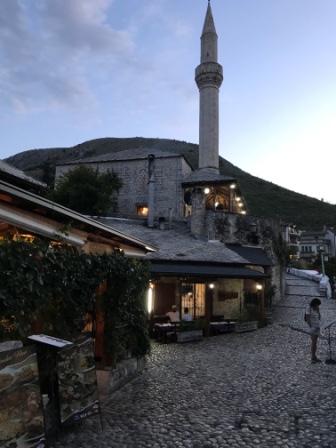 The next morning we left the hotel very early and walked the short distance to the Mostar railway station.  The building was a concrete monstrosity from the 70s that was the very opposite of welcoming. The ticket office had just opened at 6am but, save for an unusual statue, the booking hall was deserted.

There were only two trains a day to Sarajevo and, as the other left after 5pm, we had had no choice but to catch the 6:45am.   I got the tickets, amazingly cheap for the two hour trip, and then we wandered into the adjacent bus station for a coffee.

We returned to the station and were surprised to find the platform full of waiting passengers.  The train pulled in a few minutes late.  It consisted of an electric locomotive and a set of modern low-slung Talgo coaches.

Bosnia has been getting lots of help from the EU to rebuild its railway system and one of the investments has led to the purchase of Spanish Talgo rolling stock.   Invented in Spain in the 1940s, Talgo coaches are short, articulated and use pairs of wheels not linked by axles.  The coaches are closer to the ground, the ride is smoother and also kinder to the track.

We dropped another few minutes waiting in the station and then eventually set off.   The train was clean, comfortable and felt very new.  Strangely enough it had a large first class section that was completely empty.  Standard class was well used and it occurred to me that no one ever bothered to mention there was a first class option back at the ticket office.

The Mostar to Sarajevo trip is another classic Balkan train journey.  For much of the 2-hour ride the railway hugs the side of the River Neretva as it passes through a deep and very scenic gorge. The line eventually climbs out through more impressive scenery before heading into Sarajevo itself.

We arrived in Sarajevo just before 9am.

We were just over half an hour late.