A trip on the Far North Line, the northernmost railway in the UK, had long been on my bucket list.

On a recent visit to Scotland I was finally able to travel along the whole length of the line from Inverness to Thurso and Wick.

By chance, I picked a beautifully sunny November day for my journey and I was a treated to some absolutely spectacular views from the train window.

The line starts in Inverness. The city is often overlooked as a mere gateway to Loch Ness and the Highlands; but it actually has several historic buildings including its impressive cathedral, Victorian market and magnificent castle.  I got the chance to wander around a bit and I thought that it was definitely worth a night’s stay.

At Inverness station I boarded the 10:41 service to Wick. The train was operated by Scotrail which is now in the hands of Abellio: a company actually owned by the Dutch state railway.

The train was a 2-car Class 158. These diesel multiple unit trains were built by British Rail in the early 1990s for longer distance regional routes. Scotrail have made a good job of refurbishing them and  I was especially glad to see that the new comfortable seats were aligned with the windows; essential on such a scenic railway.

I counted less than 20 people on the whole train and only about 6 in my carriage.  Not only did I get a bay of 4 seats to myself, but the bay opposite was free too so I was able to switch sides easily as the scenery changed.

We left Inverness station on time and passed over the River Ness on a new viaduct (the original was swept away in 1989) and then slowed down to 10 mph clanging our way noisily across the ancient Caledonian Canal swing bridge.

Soon the view opened out and the coastal scenery, the Moray Firth, on the right hand side of the train was pretty spectacular.  After we passed Muir of Ord the best scenery switched to the left and we got a view of Ben Wyvis all the way to Dingwall 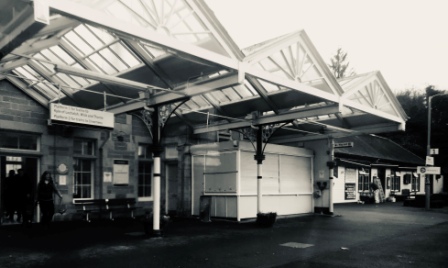 Dingwall is the junction for the Kyle of Lochalsh line, I have travelled on that line before and can highly recommend it.  Apart from Thurso and Wick, Dingwall is now the only manned station on the whole line from Inverness.  I noticed two or three people getting off at Dingwall. Two or three people more got on.

I was pleasantly surprised to see that the little train had a catering trolley; as it passed my seat I bought a coffee from the young girl pushing it.  Along with the driver and guard, she was part of a crew of three who worked the train all the way to Wick and then all the way back again.  She told me that it was a long shift from 10am to 8pm but she enjoyed the job although she was glad she didn’t have to do the same route every day. 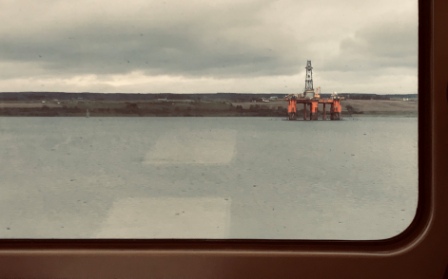 We now travelled along the shores of the Cromarty Firth. As we neared Invergordon, I got a glimpse of several offshore oil platforms.  Apparently maintaining these rigs is big business in these parts.

We reached Invergordon station and as we were waiting for another train to pass in the opposite direction, I noticed a series of murals on the platform.  They depicted soldiers leaving for war. Invergordon used to be a naval base and was the location of a famous mutiny in 1931.

At Tain a lady got on and sat opposite me.  We got chatting.  She was only going two stations down the line but we had time to chat about the local economy and industry; she told me that the distillery for Glenmorangie is based in Tain. 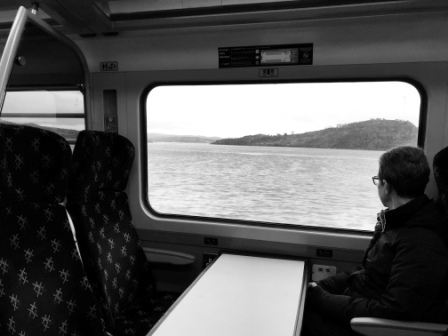 From Tain we headed along the Dornoch Firth and then inland.  For much of its course the railway keeps close company with the A9 road and the coast.  Here, however, the road made a shortcut across the Dornoch Bridge whilst the railway diverted inland all the way to Lairg.  There was a plan, apparently, to build a railway bridge alongside the road, but it fell through. 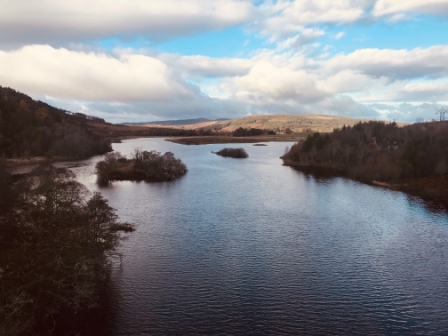 The bridge means that the road is now a much quicker way of reaching Wick from Inverness and the railway suffers a bit from this.  It is not all bad news though as we were treated to some pretty stunning rural scenery as we headed inland.

The lady guard finally arrived to check my ticket.  A regular return from Inverness to Wick cost about £34, although a day trip was possible with a cheaper ticket for around £29.

A comfortable round trip is actually possible by leaving Inverness on the 10:41am, arriving in Wick just before 3pm having an hour at the terminus and then catching the 4pm train to arrive back in Inverness at just after 8pm.

We now reached Ardgay.  The line itself was opened in sections: the first stage reached Ardgay in 1862, it was extended on to Golspie in 1868, Helmsdale in 1870 and all the way to Wick and Thurso in 1874.

The Highland Railway was the main operator until grouping in 1923 when the line passed to the ownership of the London Midland & Scottish Railway.  After nationalisation in 1948 the line was under the control of British Rail’s Scottish Region.

The area we were passing through now was known as Sutherland and the extension of the railway from Ardgay north was down largely to the persistence of the 3rd Duke of Sutherland who was a keen railway enthusiast.

We stopped at Lairg and then soon after the scenery changed slightly to open moorland and grazing land as we headed down the glen to Rogart.

After Rogart we finally started to get back towards the coast to be finally reunited with the A9.

From Golspie the line hugged the coast.  We passed through another request stop for Dunrobin Castle: home of the Duke of Sutherland and open to the public in the main tourist season. 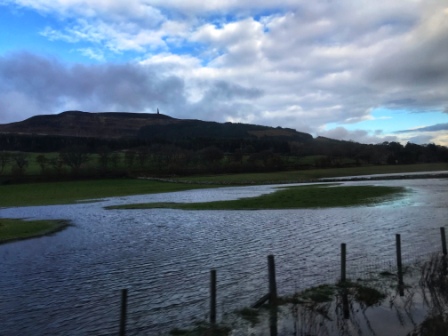 We stopped at Brora and three more people got off leaving just two other people in the whole of my carriage.

The next section was certainly one of the best bits of the whole trip: we ran right next to the beach.

The first views were of sandy beaches but then it become much rockier.   Apparently seals are often to be seen around this part of the coast. 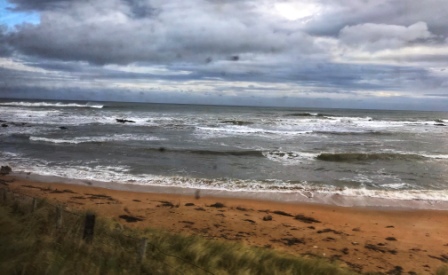 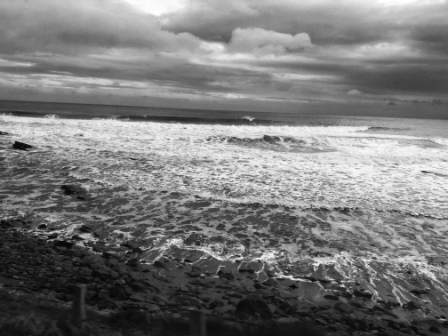 Finally at Helmsdale, the line turned inland again and entered one of the most scarcely populated parts of Scotland.

A lady who had been sitting behind me came up and talked to me for a few minutes. She was from Dorset and had a brother in Thurso. She was going up to see him for a couple of weeks.  She told me she had been making the journey at least once a year for more than twenty years and she never got tired of the scenery. 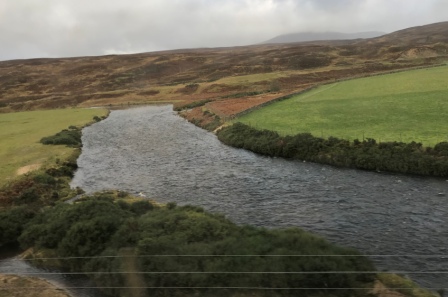 We headed along the Strath of Kildonan with a clear view of the Helmsdale River to the right.  Apparently it is renowned for its salmon fishing. 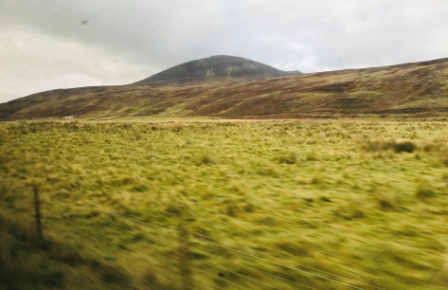 Every so often we would encounter radio masts next to the railway. This was evidence that the line is signalled on the “Radio Electronic Token Block System”.  The system uses radio communication to signal the line. 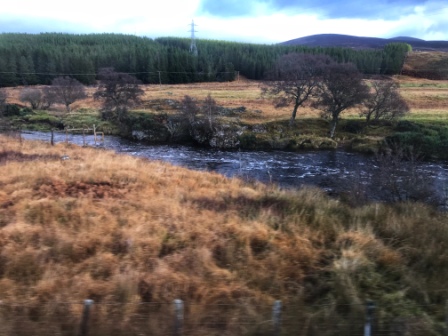 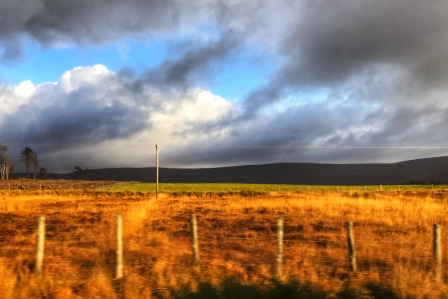 At Forsinard we waited again for another train to come past us.   Whilst we were waiting I chatted to the guard and she told me that the area is famous with bird watchers and that many of them use the train.

From Forsinard we headed over moors past Altnabreac.  The landscape around here was as remote as I have ever seen from a train window in the UK.

The darkness of the sky seemed to add to the sense of remoteness of the place; there was even a rainbow visible in the distance. 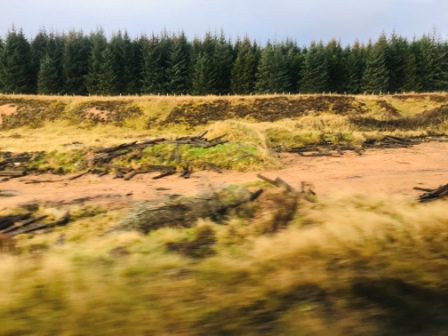 We finally arrived at Georgemas Junction where the train prepared to reverse to reach Thurso.

In the past, trains used to divide here with a portion going to Wick and Thurso. Now all trains travel first to Thurso and then reverse to reach Wick.  The total distance from Inverness to Thurso is 161 miles and from there it is another 13 miles to Wick. 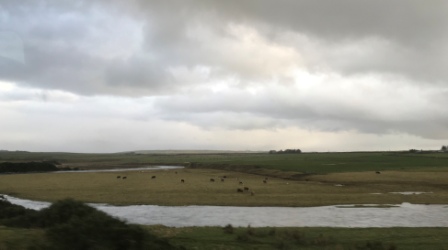 There are usually 4 trains a day and the average journey time to Thurso is just under 4 hours and to Wick about 4 hours 20 minutes. 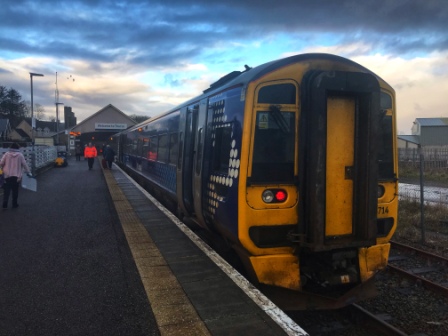 Bang on time at 14:24 we reached Thurso.  This is the northernmost station on the UK network.  I counted eight people getting off here.  We paused for a few minutes whilst the driver changed ends again and then we set off again back to Georgemas. 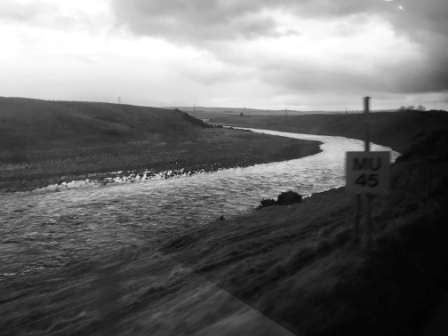 Back at Georgemas I spotted the new sidings and huge cranes which are being used to enable the railway to take radioactive waste away from the now-decommissioned Dounreay nuclear reactor nearby.

Another 15 minutes brought us to the end of the line at Wick.  As I got off I realised that I had been the only passenger on the train since Thurso. 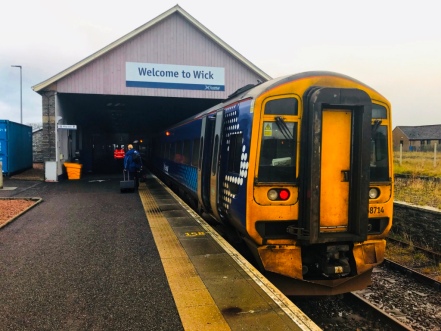 The crew of three headed towards the door of the staff room on platform; unlocked it and quickly disappeared inside. They would have a break of over an hour before operating the return service at 16:00.

I was left all alone to admire the little station building.  It was actually quite pleasing; there was an overall train shed that covered the single platform road; a mural of a steam locomotive opposite the buffers and a little ticket office in the foyer.

I walked out of the station and crossed the River Wick to head into the town.  It was cold and there seemed to be very few people about.   It wasn’t a bad little town centre though; Wick has a population of just 6,000 but the centre felt as though it was quite a bit bigger. There were several cafes, at least two Indian restaurants and a branch of Boots.

I wandered down to the quayside and looked out to sea.  Wick used to be a big herring port and it was easy to imagine the fish being landed here and transported south on the railway.

My little exploration complete, I headed to the pub.  The local Wetherspoon’s is named for local inventor Alexander Bain.  It was warm and welcoming and surprisingly well patronised for a weekday afternoon.

It was also the perfect place for a drink to celebrate the completion of my journey on the Far North Line and another thing crossed off my bucket list.