“No passenger waits on Chittening platform”.

Chittening Platform (1917-1964) is the second station in the song in Gloucestershire.  It was opened by the Great Western Railway during the First World War to service factories in an industrial area of Bristol.

It was situated on the “Henbury loop”:  a line opened for freight in 1910 which linked Filton with Avonmouth.  The loop, which takes its name from another station east of Chittening Platform, had a passenger service from shortly after it opened until the 1960s. It is still retained for freight today.

The X on the map shows the approximate location of the station in relation to the current British railway network.  The approximate position of the Henbury freight loop has been added and is shown in black.

Back in 1962 the service was built around the factory workers and consisted of just two trains a day in each direction to and from Bristol (30 minutes).  As a reflection of the longer working week at the time, trains ran six mornings a week, in the evenings on Monday to Friday and at midday on Saturdays.

Today, St Andrews’s Road (a 25-minute walk away) has infrequent trains which reach Bristol in half an hour.

Road congestion is an increasing problem in the Bristol area and there have been calls for the introduction of better rail-based transport solutions and even a “Bristol Metro” along the lines of similar schemes in Newcastle, Manchester, and Sheffield.   The reopening of the Henbury Loop is among proposals being seriously considered.

The station site was easy to find on the quaintly named “Smoke Road” which crossed the line as the Henbury line made its easterly turn away from the Avonmouth branch towards Filton. 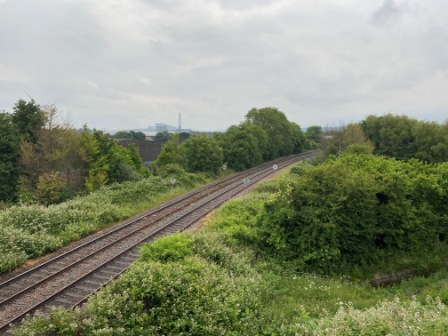 The platform used to be on the left side but absolutely nothing remains of it.  Even the industrial estate to the left here was hidden by the trees.

The whole coastline here stretching up from Avonmouth Docks was filled with Industry.  Much of it related to the docks at Bristol, one of the UK’s major ports. 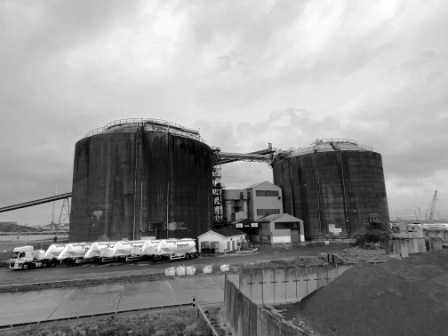 The present industrial estate next to the platform developed after World War Two and included little factories, distribution centres and vehicle repair shops.

We went south for a mile or so until we reached the little platform at St Andrews Road. We watched a commuter train arrive from Bristol.  It was heading north to terminate at the next station: Seven Beach. 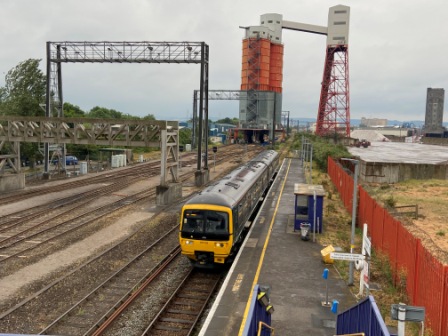 We set off in the same general direction as the train.  A footpath, the Severn Way, followed the railway line all the way along the Severn Estuary.  From the path there were clear views across the salt marsh (known as the Chittening Warth) of the River Severn and across to Wales in the distance.

About halfway between St Andrews Road and Severn Beach we came to the large, modern power station at Seabank.  It looked impressive.   Looking in the opposite direction, we could now see the “new” Severn Bridge (1996) carrying traffic on the M4 over to Wales.

A little further along was the terminus of the little branch line: Severn Beach.  It used to be quite a popular little resort, but now it looks a little run down, or at least it had that “end of the line” kind of look about it. 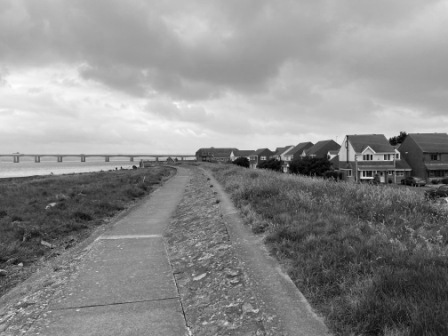 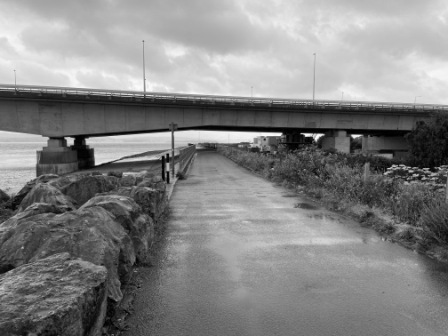 Just before we passed under the Severn Bridge, we saw a little path off to the right.  It led to the aptly named “Shaft Road”.  A few yards along it was possible to peer through the fence at the system of shafts for the Severn railway tunnel.  The tunnel, directly below here, was opened in 1886 and at over 4 miles long was the longest underwater rail tunnel in the world for nearly 100 years.

We continued further along occasionally looking back to view the M4 bridge behind us. It now felt remote and apart from a couple of people fishing in the distance, we were completely alone. I got the impression that not a lot of people normally venture this far.

Finally, we came to the remains of the old vehicle ferry pier at Aust.  The tiny little ferries that operated from here before 1966 carried only a few cars an hour; most traffic heading for Wales would have taken a long detour upstream. 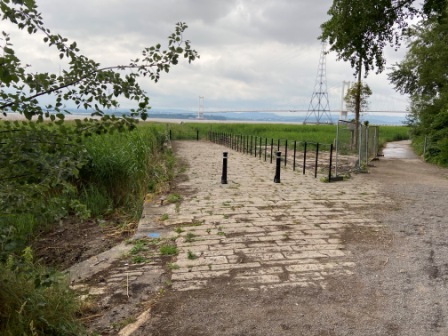 We paused to read the information boards placed nearby to learn more about  the history of the ferry.  One of them told the story of the famous photograph taken of Bob Dylan “waiting for the ferry” in the same spot just before it closed in 1966.

We finished our journey looking north at the ferry’s first replacement: the original Severn Bridge.  When it opened in 1966 it was the longest single span suspension bridge in the world.   It carried the M4 until the new bridge was built.  Nowadays it supplements the newer structure; the road across it is now known as the M48.