Wyrley & Cheslyn Hay (1858-1965) was situated on the Walsall to Cannock and Rugeley line and was originally opened by the South Staffordshire Railway.  It was located between the two settlements its name claimed to serve.  It is the second of two stations within Staffordshire itself.

The line closed to passenger traffic in 1965 but was retained for freight. It  was reopened in 1989 as the “Chase Line” and electrified in 2018.  The line is now mainly used by local trains heading from Rugeley into Birmingham New Street. 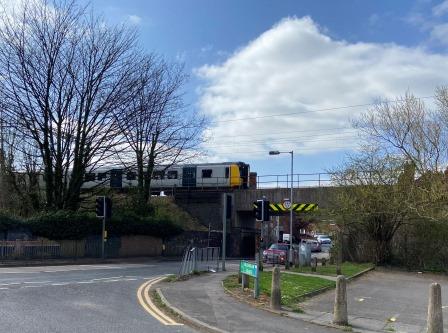 When passenger services were restored in 1989, a new station was opened to serve the villages of Wyrley, Cheslyn Hay and nearby Landywood.  It is close enough to the original site to count as a relocation of the original, but it was named Landywood.

The X shows the location of Landywood station. Wryley & Cheslyn Hay itself was slightly further to the north.

The diagrammatic map shows the position of Landywood between Cannock and Bloxwich on the line north of Walsall. Wryley & Cheslyn Hay would have been in the same position on the diagram.

The red dot on the map below shows the approximate location of the station in relation to the local area.  The green dot shows the location of Landywood station.

Back in 1962 the station was served by an hourly weekday service of trains linking Birmingham New Street (45 mins) with Rugeley Trent Valley (25 minutes).

Today, from Landywood, there are two trains an hour in each direction which now take around 36 minutes to get to New Street and 18 minutes to Rugeley.

The old station site was very easy to locate where the railway crosses Cheslyn Hay’s Station Road.  The platforms were located just to the south of the over bridge on either side of the tracks.  Part of their remains can still be seen from the train. 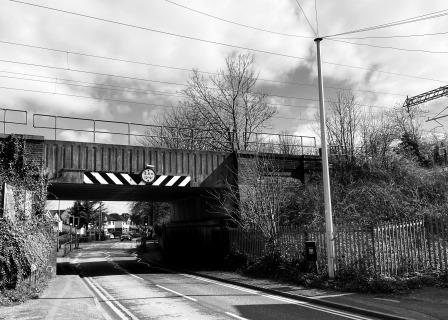 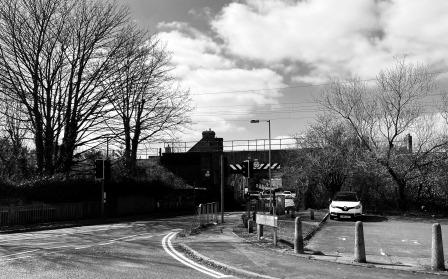 There used to be a whole network of tramways serving mines and factories in and around the station area too, but no trace of them remains now. 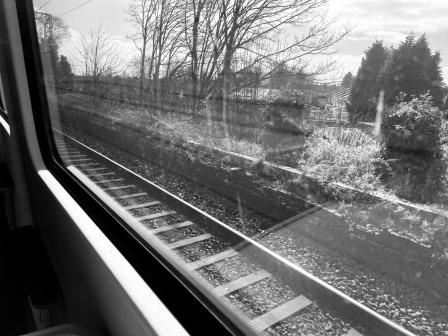 We had a little walk around in the vicinity of the old station site.  The whole area around here was once dotted with coal mines and the Great Wyrley Colliery was at the centre of the contiguous settlements of Cheslyn, Landywood and Great Wyrley (Population; ca 18,000) itself.  Now, there is a mix of older houses surviving from the time when the mines were open and much newer developments built on the site of the old pits. It is all complemented by modern retail parks and intersected by the new M6 toll road.

We went south to Landywood to take the train to Cannock. The new station was quite a simple affair with two wooden platforms split either side of a road bridge.  Buying a ticket to Cannock was easier said than done; there was only a ticket machine on the southbound side and only after we traipsed over there, did we find that it was out of order. 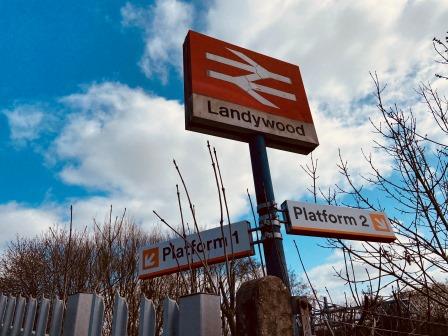 There were two trains every hour in both directions, but whilst the trains heading south seemed to follow a half-hourly pattern, those heading towards Cannock were spaced at 20 / 40-minute intervals.  We were lucky though and a train turned up almost as we arrived back at the platform still ticketless. 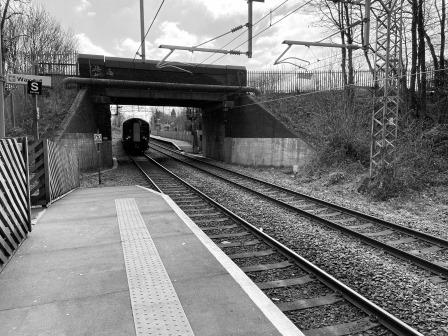 Given that it was only a short time after COVID lockdown had ended, the train on a Saturday afternoon, was reasonably busy.  The journey to Cannock took less than 5 minutes, and we passed the site of Cheslyn Hay station on the way.

Cannock was another new station with wooden platforms and a sole ticket machine on the southbound side. It was pretty spartan but attractively decorated with lots of colourful graphics of deer that advertised its proximity to the nearby area of outstanding natural beauty at Cannock Chase.  There was also an informative poster with a map which suggested a walk via Cannock Chase to the line’s terminus at Rugeley.

We walked into the centre of town.  The place was not really at its best though; and whilst most of the shops in the little shopping centre were still closed due to COVID, some of them seemed to have gone out of business for good.

There were not that many people around, but the locals seemed very friendly.  The lady in the bakery where we bought lunch told us that the town is a lot busier on Fridays when there is a good local market. They were also about to open a new designer outlet centre nearby which she hoped would bring more people in.

To be fair, they seemed to be making quite an effort to spruce the town up a bit and we noticed a lot of decent murals depicting the connections of the town with the mining industry and the natural beauty of Cannock Chase.

We saw more links to the area’s mining heritage on the outskirts of Cannock a Huntington where an old pit wheel has been placed next to the busy A34.   It commemorates Littleton Colliery, a deep coal mine that was the last working colliery in the area and only closed in 1993.

There was an interesting display in front of the wheel that detailed the history and included a photograph of the whole area in the 1970s.  Looking around it was easy to recognise where the photograph had been taken from but quite astonishing to see how the area had been transformed; new houses and an impressive school now occupied the site.

There was a plaque at the foot of the wheel which featured the names of local soldiers, former miners, who fought in both world wars.

The military connection continued at our final stop of the day.

On the edge of Cannock Chase, we found the German Military cemetery. It is the last resting place of over 5000 German Soldiers who died on UK soil in both the world wars.  The bodies were brought together here during the early 1960s following an agreement between the two countries.

Close to the entrance was a bronze sculpture of a fallen soldier resting on a block of stone and on the wall behind it was a plaque celebrating 50 years of the cemetery and the spirit of friendship and reconciliation it represented.  Close by was a little garden that contained the remains of 4 Zeppelin crews all buried together. 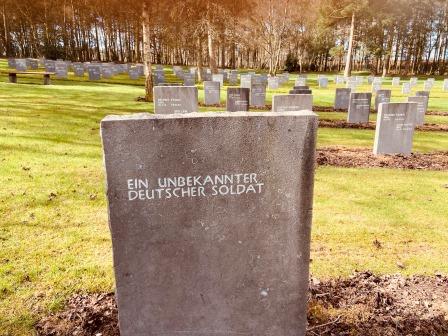 We had a walk around the rest of the cemetery enjoying its peaceful atmosphere.  Many of the graves from the World War Two were of aircrew shot down over Britain or prisoners of war who died in the UK of their wounds.  Yet walking around during the COVID pandemic, we found it quite poignant that many of the World War One soldiers, sailors and airman had died in British captivity because of the Spanish Flu epidemic.