Mumby Road (1888-1970) is one of the most enchanting names in the whole song.  The mere sound of it seems to make me feel extremely sorry that it had to be closed.

It is the first of three Lincolnshire Stations, all opened by the Great Northern Railway, that appear in the lyrics.   Mumby Road is also the most easterly station to feature in the whole song.

It was situated on the branch line to Sutton-on-Sea and Mablethorpe which left the main line from Boston to Grimsby at Willoughby and headed east to meet the sea.  The branch used to loop back to the main line north of Mablethorpe too, but that section closed even before Beeching.

The main line and the Mablethorpe branch line both closed on the same day in 1970 along with other routes that saw Lincolnshire’s rail network suddenly and substantially reduced.

The X on the map shows the approximate location of the station in relation to the current British railway network.  The nearest open station is Skegness 9.5 miles to the south.

The approximate position of some of the closed railways in Lincolnshire is shown in red.  Not all  freight, heritage or disused lines that may exist are shown.

In 1958 the station was already being ignored by many of the trains on the branch line and just 5 a day stopped.  Willoughby, on the main line, was 6 minutes away whilst trains reached Sutton in 7 minutes or Mablethorpe in 14.

Today, buses from the centre of the village connect with Sutton in less than 15 minutes.  There do not seem to be any serious plans to reopen the branch to Mablethorpe. It would probably be difficult and expensive, especially as the track bed has been built on heavily in Mablethorpe.  Mumby Road will probably be left to rest in peace.

The station site was about one and a half miles from Mumby along the appropriately named “Long Lane”.   There was still a narrow bridge over the old railway controlled by traffic signals.  The formation of the old railway could be clearly seen from both sides of the bridge.

The stationmaster’s house still exists and is now a privately residence.  We did not want to get too close for fear of disturbing the owners, but we did notice that they had put up a lovely sign based on the old British Railways “hot dog” logo. 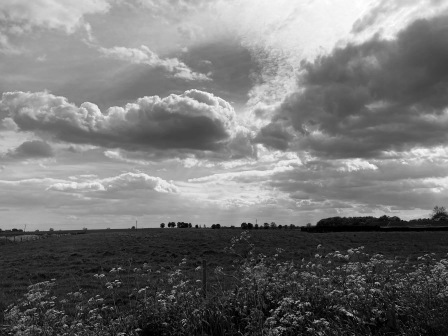 We made our way back up Long Lane into Mumby village.  Home to about 300 or so people, it seemed like a typical English village; there was a lovely little church, a pub (the Red Lion) and a mixture of different houses.   Unfortunately, we did not get the chance to see the model car museum located in the centre.  The little museum seems to be quite popular and has rave reviews online. 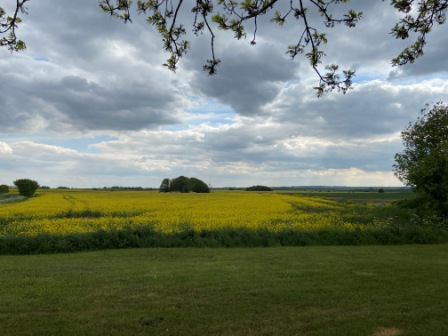 Mumby Road was around five miles west of the sea, but as it went north the old line got progressively closer to the coast until it reached the next station, Sutton-on-Sea, five or so miles to the north.    Now we ventured further north from Mumby with the line just on our left.  At Huttoft, the next village a couple of miles north, the old track bed became walkable as the “Sutton Branch Line Walkway and Conservation Area”.

We found that the scenery we were passing through had a beauty all its own.  It was pretty much deserted and flat as far as the eye could see but the patterns of the little drainage dykes cutting across the marshy land made it fascinating to look at. 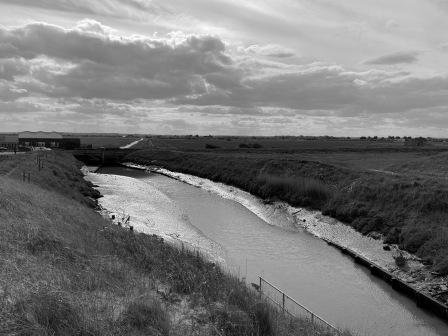 A short distance further on the old line was intersected by the Boy Grift Drain: a slightly wider channel that led out towards the sea.  Coincidently there were a couple of boys playing around on rafts in the sunshine; the whole scene seemed timeless and idyllic. 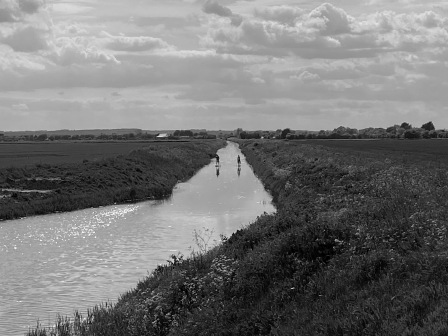 The drain met the sea at Sandilands, just south of Sutton.  We walked north past lines of brightly coloured beach huts and eventually onto the beach.  There were a few people around walking dogs; a few in their beach huts reading, but mostly it was quiet.  This section of the coast does not get too many visitors, yet it has some of the most beautiful beaches in eastern England.

The day ended with fish and chips on the beach and the chance for us to reflect whether the resorts of Mablethorpe and Sutton would be any busier now had they been able to keep their railway connection as Skegness, further south, managed to do. 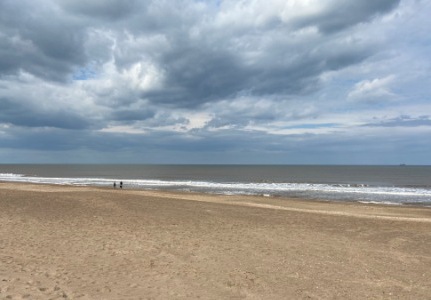