Today we would be crossing the Mid Atlantic Ridge – a series of underwater mountain ranges that are equidistant between the continents of America and Europe. The sea mounts create an immensely long mountain chain that is around 10,000 miles long, in a curving path from the Arctic Ocean, to near the Southern Tip of Africa. The Azores and St Helena islands are part of this mountain range.

We dined on a buffet meal of roast lamb, cottage pie and sushi in the Kings Court and then suspended the luxury to do our laundry in one of the free laundries located on Deck 5.

My wife concluded her flower arranging class and I, never tiring of the view of the ocean, walked around the decks again. I noticed that the Red Ensign Pennant was flying at half mast in commemoration of the victims of the September 11th tragedy.

Passing back along the promenade deck I noticed people were gathered together looking at something off the port side. It turned out to be a whole lot of dolphins. We watched for 10 minutes or more as they swam alongside the ship popping out of the water magically.

I met my wife briefly but left her to her afternoon tea routine of sitting near the window and reading her book. I went to a lecture by a professor in marine history. This one was on the switch from sail to steam in the 19th century and the social effect it had on the various ports in the UK. It was actually pretty fascinating.

Later on, we enjoyed some more of our own wine in the cabin whilst admiring the flowers that my wife had arranged in her class.

We dressed for dinner (informally – Jacket no tie) and then went for a cocktail in the Commodore Lounge.   The weather had brightened up by now and the view from the front was magnificent. At 7.00 we gathered in the theatre for a performance of the National Symphony orchestra. The NSO were on their way to New York.

The evening had an American theme and, given it was September 11th,, it started with a very moving rendition of the American National Anthem and then continued with an amazing pianist tackling Gershwin’s Rhapsody in Blue. 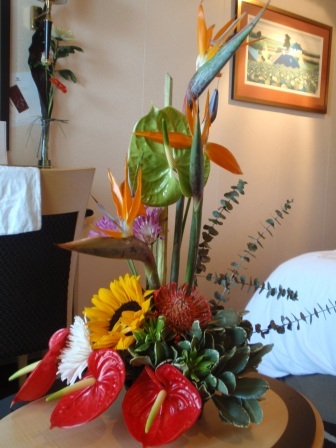 That night we had decided to forgo the Britannia and Terry and Janet’s company and try out the a la carte restaurant on board.

RMS Olympic was the first British Ship to have an extra restaurant where passengers (whose food was already included in the fare) could pay even more to dine in different surroundings.

RMS Queen Mary had the exclusive Verandah Grill located right at the rear of the Promenade Deck over looking her stern. This Art-Deco Grill, compete with black carpet and dance floor, was one of the most exclusive restaurants in the world and was often fully booked weeks in advance of the sailing date. It has been fully restored in Long Beach today.

The a la carte restaurant on QM2 is called Todd English.   It takes its name from celebrity chef Mr English (who is actually American). I had reserved a table for two (for a modest fee) in the restaurant on line about a week before we sailed.

We had a lovely meal with noticeably larger portions and even more delicious food than the Britannia. We also enjoyed a nice conversation with a couple returning to New Jersey after their first holiday in the UK.

The late nights were taking their toll so even though we tried to dance a bit in G32 our hearts were not in it. My wife retired to bed and. after a shorter than normal walk around the decks, I joined her.

There was no time change for once.  We slept well and woke up early.

My wife disappeared for more fitness classes first thing and then we met for breakfast in the Britannia for an omelette and some bagels.

The weather seemed promising. It was a bit cold but sunny. We went up for a walk on the top deck and almost immediately we were buzzed by a small aeroplane flying low across the ship. It turned out to be the Canadian coastguard who had asked permission to do a flyover and take a picture. We were now just 250 miles off the coast of Canada.

We went back to the front of the ship and visited the book shop and the superb library. 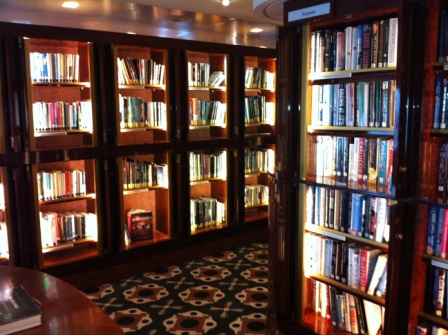 The library is decorated in dark wood laminate and enjoys the same views over the sea as the Commodore Club (which is directly above). It is a real lending library with 8,000 books and you see a lot of people around the ship with books they have borrowed (the room key doubles as the library card).

I bought two books and when the captain came in I managed to get him to sign both of them.

By the time we had done with the library the weather was getting rough again. To get a better view of the sea we retired to one of our favourite areas; one of the 4 corridors that bypass the theatre at the sides of decks 2 and 3. These corridors have chairs to look out onto the sea and there are small tables with board games: draughts, chess and the like.   Sitting here looking out almost level with the roughening sea as the ship ploughed on steadily was quite a neat experience.

This area of the ship also has the highest concentration of the “Cunard Quest”.

This is a series of 163 laminated boards on various different themes that tell the story of Cunard and White Star on the North Atlantic. It is complimented by over a hundred paintings of QM2’s forebears. These are scattered around the ship hung in the stairways, in the lifts and corridors.

Featured there are all the “ia” liners of Cunard such as Britannia, Lucania, Caronia, Umbria, Etruria, Campania, Mauretania, Lusitania, Aquatania, Berengaria competing against all the “ic” liners of White Star such as Oceanic, Homeric, Celtic, Cedric, Adriatic, Georgic, Olympic and Majestic.

I spent many hours looking at all of this stuff and absorbing it all.

We were sitting in our little corridor when the noon bell sounded once more.