We woke up with hangovers and had a quick walk around Port Fairy to try and clear our heads. It was quite a quaint little place. After a few coffees we all felt a bit better and headed out again in the Ute.

We stopped in Hamilton and bought some pasties and I bought a thick checked red-coloured  shirt. I immediately put it on and wore it for the rest of the day. Mark and Tony told me I looked like a lumberjack but I didn’t care as it was comfortable and warm.

We headed off through the beautiful Grampian Mountain Range. We paused at a waterfall and then headed towards Halls Gap. We went for a long walk up to Baroka Look Out and had an interesting chat with a couple of park rangers who were constructing a fence nearby. 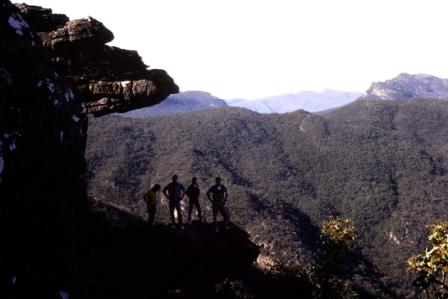 Halls Gap Youth Hostel was in a beautiful bushland setting. There were a few wooden buildings arrange in a U shape with a common room at the centre. It was cold though but luckily there was a fire going in the grate when we arrived.

When we arrived there was only a Canadian lad, from Alberta, sitting by the fire. But we were soon joined by Cliff, a young guy from Brisbane taking some time off to drive around the country, and his hitchhiker passenger Didier.

Didier was from Paris, France and he was quite a character. He was in his late twenties and he just had decided one day he would just quit work and hitchhike around the world. His luggage consisted of one small holdall bag. He told us that when he left France he had had a massive backpack but it had been stolen in the USA. A car had stopped for him, he had loaded his pack in the back and then the car had driven off with his pack before he had the chance to get in.

He proceeded to open the holdall and showed us that inside was just a pair of boots, a few t-shirts, underwear and his soap and shaving stuff. He explained he had learnt his lesson and had vowed to travel lightly for the rest of the trip. 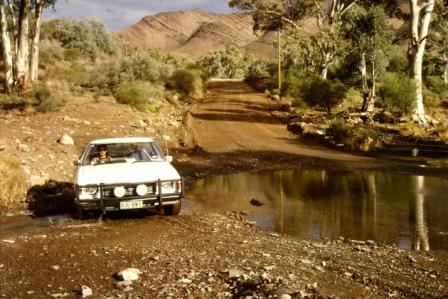 There wasn’t much to do at Halls Gap. There was a selection of mountaineering books and a game of hoopla. We just sat there by the fire listening to Didier’s tales of hitching. The warden, who had a dreadful stammer, came by at 8pm to collect our $5.75 rent and whilst he was there we heard a possum on the roof. We all went out with torches chasing after it but after a while we got bored and retired to bed before 10pm

We were all heading roughly in the same direction the next day, so we made a decision that Didier would travel with Mark and Tony and I would go with Cliff.

We made slow progress and stopped often. We climbed up to the Balconies for another fantastic view and we pulled up at Zumstein to feed some tame Kangaroos by the side of the road. They were fantastic animals to get up close to. We fed them on bread and they seemed to like it. 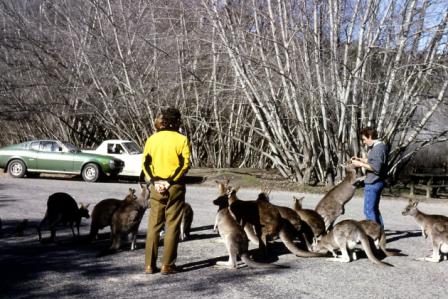 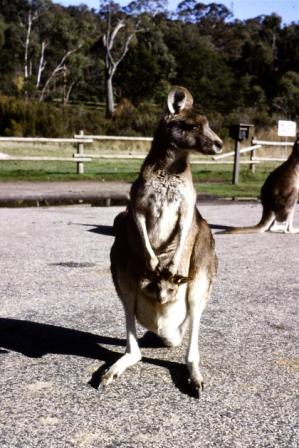 We headed on through Horsham and out the other side, passing from Victoria into South Australia. The scenery didn’t really change and soon we were at Naarcoote. We stopped to investigate the caves there and went for another long walk.

Cliff wanted to stay for a while longer but the rest of us were keen to move on. The problem was that the Ute was a pick up and only had three seats.

The solution was me sitting in the back in my sleeping bag with a pillowcase on my head. I put on my headphones on and listened to a tape as I bounced and bumped along the roads waving to the sheep truck drivers as I went.

Soon we arrived at Beechport, a picturesque fishing port 400km south of Adelaide, and had a walk along the very long jetty.

We found and then settled into the youth hostel.  We spent the evening in another pub but we went a little easier on the Cooper’s ale.

Cliff was staying around Beechport for another day so Didier had already decided to hitch. Mark suggested that for a discounted fee he could ride in the back of the Ute. I added that I had already proved that it was comfortable.

So we set off again with the three of us in the front and Didier in the back. We tucked him up under a tarpaulin, gave him a pillow to cushion his head and Tony’s cuddly toy animal for company. 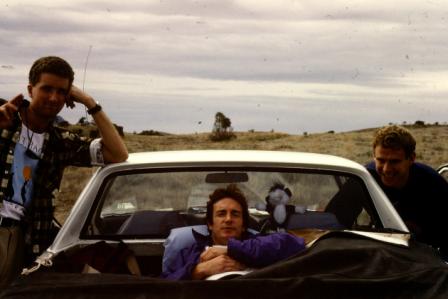 We headed pretty much in a straight line to Adelaide and made a stop at Kingston for lunch. We went to get some meat at the local supermarket and when we came out we found that the Ute had vanished. We thought Tony had finally had enough of Mark until he reappeared about 30 minutes later having been to the post office.

We had a brief walk around Adelaide but we weren’t too impressed with it. We checked into the modern concrete Youth Hostel for two nights. We cooked the meat for dinner and headed out once again to a pub to compare and contrast “Coopers” with another brand “West End”.