We woke up to find it was raining. We decided to deal with a few business items before setting out again. Mark went to the post office, Diedier and Tony went to the bank and I got my hair cut. Finally at 10:30 we set off from Augusta.

We were following the route that Flinders took on his explorations and also heading along the route of the old, now derelict, narrow gauge Ghan railway. We paused at Hawker for lunch and stopped again to photograph a dead kangaroo on the road.

We spent the afternoon bushwalking in the area around Wilpena Pound. It was a giant “lake of bush” surrounded by mountains. We had a fantastic walk and managed to spot Galahs, Magpies and even a Kangaroo with her Joey.

In the evening we got another on-site van at the Rawlinson’s Bluff campsite. Diedier cooked up some Irish stew with spaghetti and we all got an early night for a change. I slept well but mosquitoes somehow got through into the van and I had some pretty nasty bites.

We set out at 9am walking and we started to climb St Mary’s peak (1180m). We didn’t make it to the top but we got a good view from the saddle. The whole walk took us about four and a half hours and we had piping hot chicken pasties for lunch when it was all over.

We set out driving again at 1pm. It was raining quite hard and unfortunately it was my turn in the back. It took us 2 hours to reach Leigh Creek South. We decided it was as good a place as any to pitch a tent. 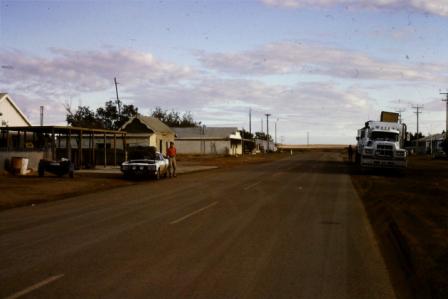 We found a hotel for something to eat. There was no choice in this predominantly brown coal mining area. The atmosphere was very “staff canteenish” but the ham, chips and salad was excellent and we washed it down with some West End beer too.

At 8pm we decided it was time enough for bed and drove a little way from the town and pitched the tent. It wasn’t difficult to pitch and surprisingly I had a comfortable night and the mosquitoes stayed away.

We all woke up early and decided to make a move at 5:30am. We got to Maree and spotted a roadhouse for breakfast. A spotty young waiter served us under-cooked tasteless bacon in stale bread. We vowed never to return to Maree.   The whole town was a dump but it had one saving grace; a group of abandoned Ghan Locomotives rotting in a siding. I ignored the keep out messages and went over to have a closer look at them.

The bitumen finally ran out after Maree and the road turned to a track. We were pursued by a couple of four wheel drives and a road train. There was nothing to see for miles except dust, abandoned railway sleepers and more dust. Occasionally there would be an abandoned car or a big bush and we would all get excited. We carried on across this wilderness all morning. We passed a camel, a couple of kangaroos, and a dingo and we also spotted eagles and flocks of galahs flying in the sky.

We crossed the salted Lake Eyre where Donald Campbell raced his Bluebird car back in 1964 and then finally at 12 noon we reached the most desolate, isolated and smallest town in Southern Australia, William Creek.

The William Creek hotel was staffed by a middle-aged lady and she served us with beer and pasties whilst we admired the stickers on her walls. She told us that she had moved from Adelaide to escape the noise. Her husband was out though, so we only managed to meet 50% of the population of William Creek that day.

We resumed our bumping and bouncing along the dusty highway for the remaining 200kms to Coober Pety. On the way we passed from cattle country to sheep country and we went through the famous 9100km fence that is designed to keep the dingos from the sheep.

Coober Pety, the opal mining town, was back on the main Adelaide to Darwin “Stuart Highway”. Because of the heat most of the town is actually located underground. We checked into the Associate Youth Hostel. It was run by a family of Eastern Europeans and was also located underground. 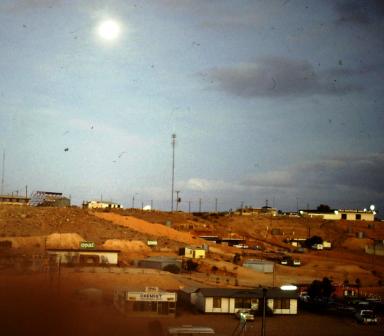 It was a cross between a cave, a wine cellar and an air raid shelter. We had a drink with the American girl we had met in Geelong and reminisced about the dragon lady.

The next morning we went out on Joe’s tour. Joe was an elderly Yugoslavian immigrant with a great philosophy on life. He took us on a tour of the mines, the fossiking beds, past deep shafts and she showed us crocodile Harry’s dug out.   He led us past the place they filmed Mad Max 3 and gave us many fascinating insights into his life living partly underground.

He finished the tour by proudly showing off the new hospital, underground catholic church and the water plant. At the end he shook us all by the hand and wished us a good trip to Ayers Rock.

Actually it wasn’t such a good trip. It was a long boring haul and we didn’t reach the campsite at Yulara until 10pm. Yulara didn’t offer much and it was obviously a tourist trap to capture as much tourist dollar as it could.  We evaded the hefty 24 dollar campsite fee by pitching the tent at 10pm and leaving before 6am.