The next morning I boarded the 7:30 am bus to Kuala Terengganu.  It was quite crowded but I managed to get a seat. We passed lots of little fishing villages (kampongs) on the way and finally arrived at the laid-back market town of Kuala Terengganu at 10am.

It was the festival of Hari Raya and I wandered around sampling the festive atmosphere.  I looked for somewhere to eat but most places were crowded.  I eventually found somewhere to have a roti at the back of the bus station.

I sat near the river and waited to board the 1:30pm bus on to Kota Bahru.

We set off on time but progress was slow.   The roads were filled with traffic.  There was a lot of other buses and Mercedes taxis everywhere.  It took more than 3 hours of driving past paddy fields before we finally made it to Kota Bahru.

I consulted my guide book and went off looking for the guest house it recommended; Mammy’s.   I located it but there was no one around.  I was wondering what to do when a guy summoned me across the road to the Rainbow Guest House. It seemed fine.  A dorm bed, I was told, was to be had for 4 dollars.

There were only three rooms in the whole house.  There was a dinky squat toilet and a basic shower but it was actually quite cute.  It was run by a team of 4 Malays led by a guy who was very charismatic and looked exactly like Charles Bronson. 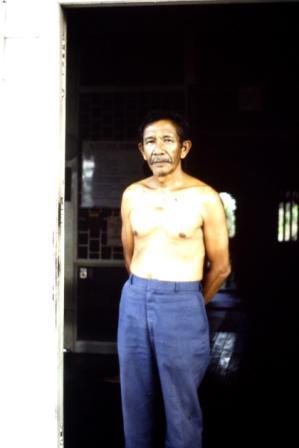 Not wanting to waste any time,  I checked in, left my stuff and arranged the rental of a bike.  I cycled off in the direction of Salak beach.

Salak is where the Japanese landed in 1941 just one and a half hours before they attacked Pearl Harbour.   The cycle ride was pleasant, if a little hot, and it took me past kampongs with goats and cows freely grazing. I got an almost nonstop chorus of “hello” from the friendly local children. 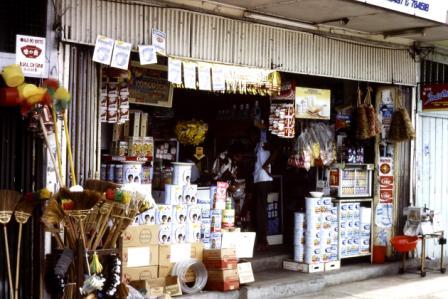 The beach was really beautiful and it was full of Muslim women who were walking around fully-clothed despite the hot temperatures.  I spent an hour or so there and then managed to find some ice cream before riding back.  The same kids were saying hello to me again on the way back too.

I spent Wednesday evening in Kota Bahru, a thriving little town, and I walked around the little night market. It was pretty neat and atmospheric.  I sampled satays and peanut sauce at a typical marble top, plastic-plate café and then washed it down with F&N orange juice.

After I had eaten I continued to walk around the night market. They had every kind of food imaginable; fish heads, fish cakes, and a lot else besides.   I was still hungry so I had some murtabaks, basically  Indian style food presented on a banana leaf, and a plate of nasi goreng  fried rice.   I went back to the Rainbow in a trishaw.

I went to the Thai consulate at 9am and got in the queue for the visa application form.  The Thais were very helpful and actually agreed to process the visa in a day and asked me to come back at 2:15pm. 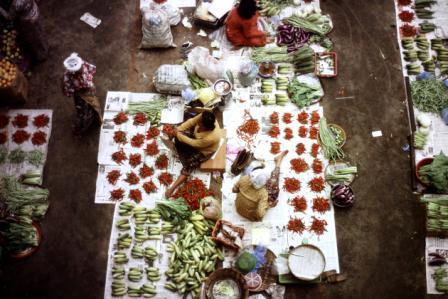 I went for another walk around Kota.  It had a very busy active feel to it, but everyone was so friendly too.  I was greeted with a chorus of “hellos” everywhere I went.

Kota had a beautifully laid out market hall and I spent over an hour walking around admiring it.   I stopped at one of the many stalls selling drinks in plastic bags and bought one to help combat the heat.

There were lots of rustic smells too probably from the deep open drains.

There were motorbikes everywhere and I hitched a pillion ride on one to go back to the consulate and pick up the visa, and I got another one back to the Rainbow.

Back at the guest house I was treated to fresh fruit salad and cucumber sandwiches for lunch.

Later on Charles Bronson got busy at his blender and handed round truly delicious fruit drinks.

In the evening I went back to the night market to get some more food.  I was getting addicted to the tasty night market cuisine. I returned to the Rainbow full of murtabak, mee goreng and chicken satay.

I talked with a girl from Manchester who knew one of the guys I had worked with at Kodak in Sydney.

I woke at 7:15am and had a farewell breakfast cooked by Charles Bronson.  I ate it in the company of Gary, a cyclist who I had last met back in Darwin Youth Hostel, a Chinese Canadian girl and a German girl.  We all said goodbye to Charles and then we all set off aiming to catch the 8:15am bus from the bus station.

We got a taxi but there was too much traffic in town and we didn’t arrive at the bus station until 8:20am.  Luckily the bus was leaving late so we did actually make it.

In the end the bus left twenty minutes late and got us to the border at 9:50am.

I was ready for Thailand.