I woke up and decided to hitch down to Wellington. I chatted with a French girl at breakfast at the Rainbow Lodge and I found out that she was proposing to do exactly the same thing.  We bet each other a dollar who would be first to reach the Wellington Hostel.

I went back to the room and hurried with my packing. I got out onto the road as quickly as I could but there was no sign of the French girl anywhere. I walked a bit out of town and then started hitching.  I got a lift within 35-40 minutes of waiting but it was only to Tonganairo; the next town. The driver was an ex-farmer who was now in the house building business.

I waited another 40 minutes at Tonganairo until a Scottish guy pulled up in a station wagon. He explained he was a self made man, a farmer and a born-again Christian. I will long remember trying to get him off the subject of religion whilst trying to look at Mt Tongairo out of the window. He went on and on about the holy spirit but he offered me his sandwiches and when we stopped for coffee he bought me a bacon and egg pie. The lift ended in Taihaippe where he’d gone to do some deal with the local farmers on fertilizer.

The third and final lift of the day was the longest one.  It was with a refrigeration sales manager on his way to a suburb of Wellington to make a sales call. He didn’t talk much and I couldn’t really work him out; we talked a little about earthquakes and race horses but not much at all really.

He dropped me at Jonasville on the outskirts of town. At the local butcher I bought a hot meat pie for lunch and some lamb chops for later and then jumped on the suburban train for Wellington. It was a rickety old English Electric train from the 50’s but the ride was pleasant enough despite some noisy school children running up and down the train.

The good news was that Wellington had a spare bed in the youth hostel. The bad news was the the French girl was already sitting in the lounge. She had done it in one lift. I handed over the dollar like a true gentleman.  I didn’t mention the train.

“Windy Wellington” lived up to its name and it was very windy when I got there. Even the local radio station was called Radio Windy.

It started to rain in the afternoon. I stayed in and talked to the French girl and to an English couple from London.

I cleaned the hostel on Tuesday morning and then checked in for another night. I walked down to Lambton Quay, the main centre, and found it very quiet and very damp. It was small even compared to Auckland.

I decided not to linger too long and booked the ferry out for the next day.

Then I went to the British High Commission to read the Guardian for an hour or so. I found a coffee lounge and had a winter warmer meal of soup and pies for lunch. 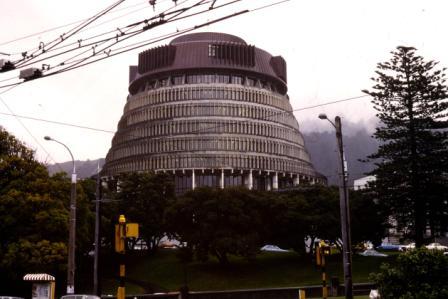 In the afternoon I did a tour of the beehive-shaped parliament and watched a debate on the new Housing Conditions Corporation.

I attempted to go to another museum but I was blown back by the gales and ended up shopping instead. I found a really good deal on the sleeping bag that I knew I would need for the next part of the trip and snapped it up.

Wellington’s famous funicular cable car was broken the day of my visit so I took a bus up to the Botanical gardens.  I had a bit of a walk around in the rain but my heart wasn’t really in it and I went  back to the youth hostel as early as I could at 5pm.

It was great to be out of the rain. It already felt quite wintry and I figured that as the next day was the southern hemisphere equivalent of October 1st that was not really surprising.

I had a tasty tea of mince, potatoes and peas, and then a chat with a guy who was training to be a chef in Boston MA.

I got an early night.