By Pendolino to Glasgow and Edinburgh

Glasgow and Edinburgh, Scotland’s largest city and its capital, are both situated roughly 400 miles north of London. The two cities are less than 50 miles apart from one another, yet they are linked to the English capital by two completely separate railway lines. The West Coast Main Line (WCML) extends 401 miles from London Euston via Preston and Carlisle to Glasgow, whilst the East Coast Main Line (ECML) travels through York and Newcastle to link London King’s Cross with Edinburgh 393 miles away.

The two lines were built by two separate groups of competing railway companies. Over the years the companies were merged together, nationalised in 1948 to form British Railways and then privatised again in 1997.

The first through trains from London to both Scottish cities started in the 1860s and initially they took up to 12 hours to make the trip. On both routes there was a “flagship” train which made the fewest stops and had the quickest time.

On the east coast the train eventually became known as “The Flying Scotsman”.  Its big rival on the west coast was “The Royal Scot”.   Both trains left their respective termini at around 10am each morning.

In the 1920s and 30s the trains were really something quite special. The Flying Scotsman train even included a cinema and a barber’s shop on board.  By the 1980s, however, they had been reduced to being just “names” that appeared in the timetable. The trains themselves were identical to all the other trains found on each line. The only thing that made them special was the stopping pattern. All other trains made 4 or 5 stops on their way north, but the Flying Scotsman stopped only at Newcastle and the Royal Scot stopped only at Preston.

Over the years the journey times came down dramatically as better steam locomotives and new forms of diesel and electric traction took over. At the time of privatisation in 1997, the fastest east coast express reached Edinburgh in just over 4 hours. The fastest west coast one reached Glasgow in just under 5 hours.

The reason for the hour difference in journey time was that the track on the west coast had a lot more curves. The long straight sections of the east coast line meant that trains could cruise for long periods at up to 125mph. Their counterparts on the west coast were limited to short bursts of 110mph before slowing for the numerous bends.

In the 1970s British Rail created the ambitious “Advanced Passenger Train” to tilt round curves and cut journey times, but it hit technical and funding issues and was scrapped in 1980. The technology was sold to the Italians.

When the railways were privatised in 1997 Virgin Trains won control of the west coast line. It had a plan (also using a lot of government money) to speed things up by using Pendolino tilting trains (bought back from Italy of course) to cut the time to Glasgow to about 4 hours 15 minutes.

Over on the east coast the winning company, GNER, accepted that little more could be done to reduce timings. It aimed instead to attract more custom by increasing train frequency, improving the interior décor of the trains and making them more comfortable.

In early December 2004 we made a plan for a long weekend trip to Glasgow and Edinburgh. We planned to stay two nights in both places and decided to use the “Royal Scot” down from Euston and the “Flying Scotsman” back up to Kings Cross.   (in railway terminology one goes “up” to London and “down” to Scotland)

By 2004 Virgin had actually removed the name “Royal Scot” from its 10:15 morning departure, but the 10:15 was still the sole train of the day to stop only at Preston and Carlisle. By contrast, over on the East coast GNER had kept the label “Flying Scotsman” for its 10:30 departure from Edinburgh but it was otherwise part of the standard schedule and made stops at Newcastle, Durham, Darlington and York.

We boarded the Pendolino at Euston about 20 minutes before the scheduled departure time.   We were already familiar with the train as we had used it to Preston previously on a couple of occasions. The interior was a little cramped and the windows were small, but otherwise the saloon was quite comfortable, especially in first class where we were sitting.

The train departed on time from Euston at 10:15 and made good progress along the familiar route to Preston. We were served a free “portion-controlled” breakfast from the trolley. It was okay but it was nothing like the sort of thing to be found in a more traditional restaurant car.

The “free” catering service in first class made no provision for the long distance passenger. It would have made sense to offer a hot lunch as an option, but Virgin had decided just to offer breakfast. They had assumed that most people would get off at Preston. Sandwiches were offered to passengers joining at Preston.

The tilting sensation was certainly apparent but didn’t bother us too much. Much more annoying was the almost constant warning beep from the alarm in the toilet and the strange smell of the toilet itself.  Both were common problems on the Pendolino and it was not the first time we had experienced them.

The train made Preston on time at 12:17 and then carried on north. The scenery on the west coast is more dramatic after Preston as the train climbs first Shap in the English lakes and then Beattock in the Scottish lowlands.

The train had a generous recovery allowance and pulled into Glasgow Central a few minutes earlier than the 15:00 scheduled arrival.

Although I had often passed through Glasgow Central on my way between its stations, this was my first visit to the city proper.

I didn’t really know what to expect. On the one hand Glasgow had had quite a reputation when I was growing up for hard drinking, gangs and general “roughness”.     On the other hand it had been the subject of the “Glasgow’s miles better” campaign since the 1980s and now had a different reputation as a city that had re-launched itself successfully. 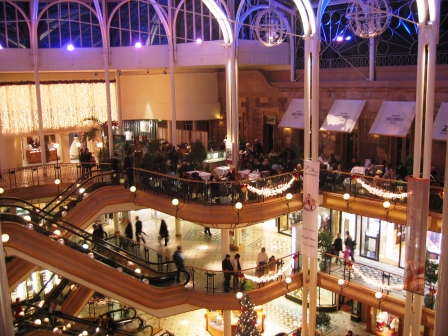 In the end we were more than pleasantly surprised.   The strongest impression we got was that the people were ultra-friendly. Probably the friendliest I have come across in any major UK city. We were met with kindness and smiles wherever we went.

It was just coming up to Christmas and the whole of the city centre was decorated festively. The centre had obviously had a makeover as the shops felt quite upmarket. There was a visiting German Christmas market too and the whole atmosphere felt relaxed and pleasant.

We didn’t just stick to the posh shops either; we went out to the east end to browse at the Barras Market. The Barras is a mixture of street and indoor markets and it is really worth spending a couple of hours walking around, taking in the sights and sounds and soaking up the atmosphere.

We rode the cute little “clockwork orange” subway train and toured the city on foot. We went in a few museums including the impressive Transport Museum. 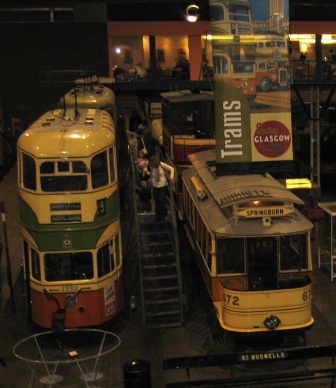 We had some great food too including afternoon tea at Charles Rennie Mackintosh’s Willow tea rooms and dinner at one of the city’s up and coming restaurants; “Ubiquitous Chip”.   Both experiences were superb. 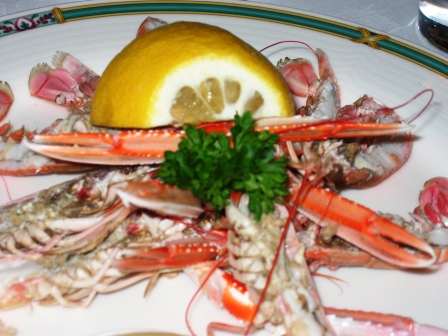 All in all, after a brief two night stay, we were actually quite sorry to leave Glasgow.

We boarded the little local train at Glasgow Queen Street to take us on the short journey over to Edinburgh.

We arrived in Edinburgh on the afternoon of our third day. It wasn’t the first time we had visited. We had been a few years before using GNER from Kings Cross. We had previously visited in the summer and had spent time getting to know the city. We had also visited Leith to look over the recently de-commissioned Royal Yacht Britannia (some argued the ship should have gone to the city of its birth; Glasgow). 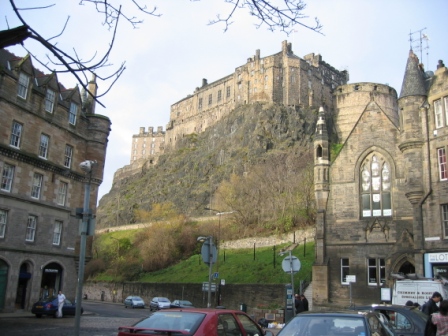 The winter seemed to suit Edinburgh somehow. The amount of daylight was restricted, but the warm glow of the lights and the warm interiors of the restaurants and pubs seemed to give it almost a magical atmosphere. That could be true of many places, I suppose, but it seemed to be even more apparent for Edinburgh. 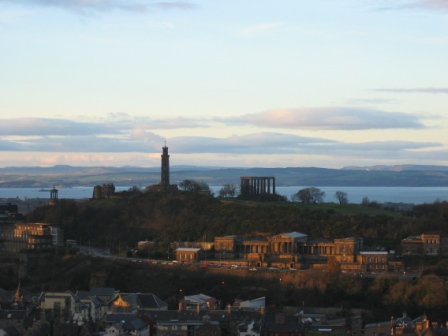 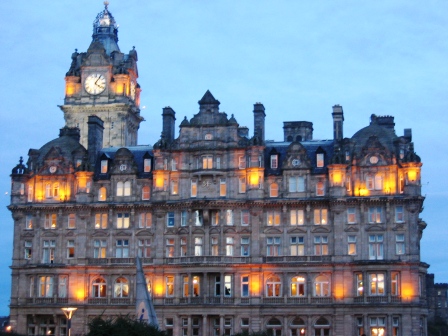 We did a tour of the Scottish Parliament, but otherwise we didn’t really repeat any of the main sights. Instead we wandered around and went back to a few favourites from the first trip. We had a great lunch and picked up some provisions from the excellent Italian delicatessen Valvona and Crolla. This real treasure trove of a place was even more special as it was all dressed up for Christmas. 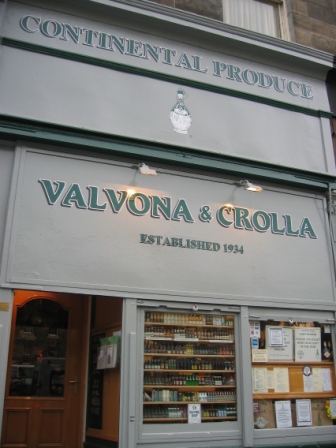 Caseys sweet shop with its retro sweets was another wonderful example of an old Edinburgh shop that was still flourishing. 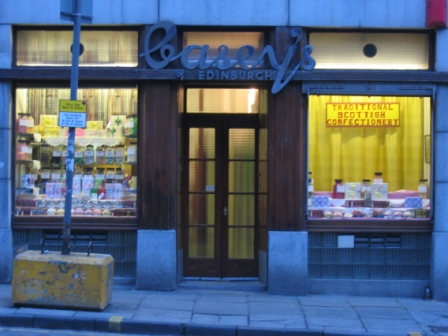 We also had a real Scottish fish and chips experience with the chips covered in the mixture of brown sauce and vinegar that is so popular north of the border.

So which was better Glasgow or Edinburgh?

To be honest, it is too difficult to choose between them.

It wasn’t difficult to choose between Virgin and GNER though.

Like many I think the GNER livery works well. The dark blue relieved by a red stripe along the carriage length looks good.

We boarded the 10:30 departure from Edinburgh.  The departure boards and the train labels confirmed that it was the Flying Scotsman. Immediately the difference from the Pendolino was quite apparent. The train was more comfortable and spacious. It had to be said though that when we got going the ride was a little rougher.

The best scenery on the east coast comes quite early on in the journey.  My favorite bit is when the train skirts the coast at Burnmouth just north of Berwick and then crosses the spectacular border bridge over the River Tweed into England. (Sit on the left) 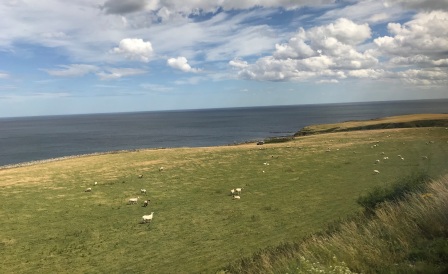 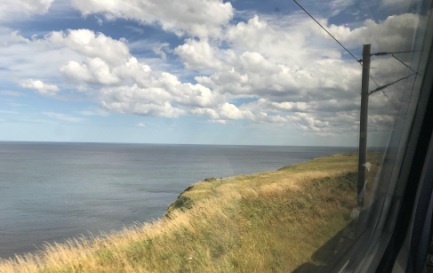 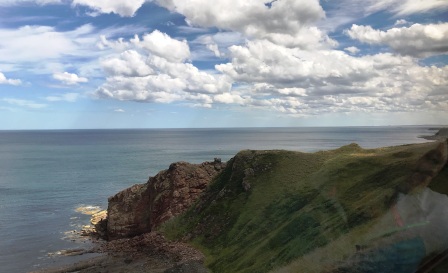 With the scenic excitement over with we went off to the restaurant car for lunch. We had a lovely 3 course meal whilst watching Newcastle, Durham and the Vale of York out of the window

Although the food wasn’t included in the price of the ticket like Virgin, it was of much better quality. 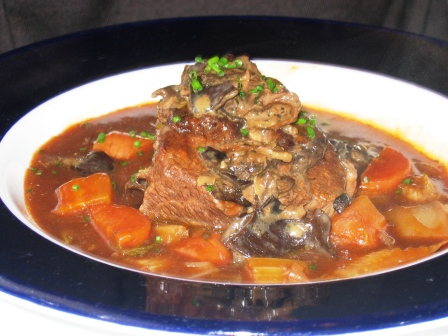 By the time we had returned to our seats the train was already well south of York. We made good progress all the way south and arrived back at King Cross bang on time at 15:12.

On this experience and several others, I would take GNER over Virgin any day.

The modernisation work on the WCML was finally completed in 2008 and now the Pendolino trains run hourly to Glasgow making 6 stops and taking around 4 hours and 25 minutes.   There is no longer any flagship service any faster than that.  The Royal Scot is but a distant memory.

GNER stopped operating the ECML in 2007. After another private operator and two periods of temporary state control, Virgin took over the line in 2015. As they still control the West Coast there is now little real competition to Scotland.

The restaurant car is long gone and portion-controlled free food is very much the norm. In 2011 the trains departing Kings Cross at 10:00 finally lost the name “Flying Scotsman” too. On the ECML the fastest northbound trains take about 4 hours 20 minutes to reach Edinburgh with 4 stops.

However, in the southbound direction there is one train, the 5:40am departure from Edinburgh, that is scheduled to take just 4 hours to reach London with a single stop at Newcastle.  It has been given a very familiar name; “Flying Scotsman”.

If I can ever be bothered to get to Edinburgh station for 5:40am I might even try it one day.