In the summer of 2008 a party of 9 German cyclists from Rheinbach ( The German twin town of Sevenoaks) made the whole trip from Germany by bicycle. It took them 7 days to complete the approximate 335 mile distance.

When they arrived in Sevenoaks they presented us with a standard German “red and white” cycle distance” sign to display somewhere in the town. It was subsequently mounted in a newly-named corner of the town – “Rheinbach gardens”.

The cyclists stayed around for a few days and during that time they visited London and Hever Castle.

About 18 months later preparations for the next regular visit of Sevenoaks residents to Rheinbach got underway. It was suggested that someone from our side should cycle to Germany.  The local cycling clubs were contacted and in the end 7 volunteers from 2 cycle clubs were found.

To that group another 3 people who had never previously cycled but who were keen to rise to the challenge were added.  One of those “novice” cyclists was me.

I had cycled a lot when I was a teenager but it had been at least 20 years since I had been on a bike. I decided it would be fun though to cycle through France and Belgium to Germany and couldn’t resist rising to the challenge.

I needed a bike of course and in early 2010 I got what I thought was the cheapest reasonable model that could be expected to get me to Rheinbach.

I spent most of April and May  slowly building up my stamina on practice rides that took me all over Kent and into Surrey as well.   By the end of it all I was confident I could cope with at least 85 miles a day and I had developed the knack of climbing a reasonably steep hill without stopping.

Meanwhile, the organisation for the trip had been progressing well. A group of 8 of us would set out from Sevenoaks on Friday 18th June and make the same stops as the Germans had in 2008 in reverse. We would be followed by a support vehicle carrying our luggage.

We would be joined half way by two more of the faster cyclists and then, on the last day, the following Thursday, we would all be met and then escorted by the Germans into Rheinbach. We would all arrive just before the bus carrying 25 more resident visitors (including my wife) got there.

Then, after spending three days in our twin town, we would use the bus to transport ourselves and our bikes back to the UK.

We had a brief “send off” ceremony in Rheinbach gardens attended by the mayor.

We set off from Sevenoaks before 9am and cycled via Yalding and then carried on all the way down to Folkestone. We stayed at Folkestone overnight.

We headed out of Folkestone and then climbed the big hill just outside the town to Capel and visited the Battle of Britain memorial on the top. We continued along the cliffs to Dover (less than 10 miles from Folkestone)

We then boarded a ferry across to Dunkirk together.

After arriving at Dunkirk ferry terminal late in the afternoon we cycled the 12 remaining miles to Dunkirk town centre.   We stayed in an Ibis hotel.

We cycled out the next morning crossing from France into Belgium. We continued north and then on the outskirts of Ostend turned east. We stayed in Aalst on the third night.

We left Aalst and cycled to Ghent where we paused for lunch.

We carried on in the afternoon heading for the northern Brussels suburb of Grimbergen.  Along the way we made a small navigational error and ended up cycling right into the centre of Brussels.   We only really realised our mistake when we were in view of the famous Atomium.

We managed to find a way out to Grimbergen eventually.  The final 2 members of our group joined us that evening.

We completed the relatively short distance to St Truiden easily including a long lunch break in the beautiful town of Louvrain. 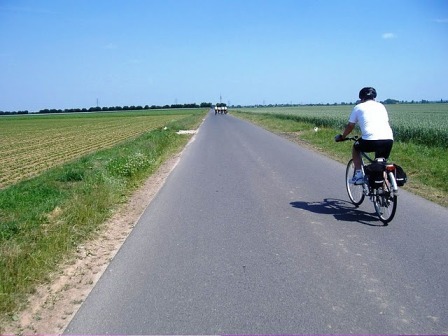 The day was relatively hard as it involved a climb in the Ardennes. We climbed up to a lookout where the three countries: Belgium, Germany and the Netherlands all met.

From the viewpoint we descended into Germany almost freewheeling all the way to our hotel stop for the night at Eschwieler. 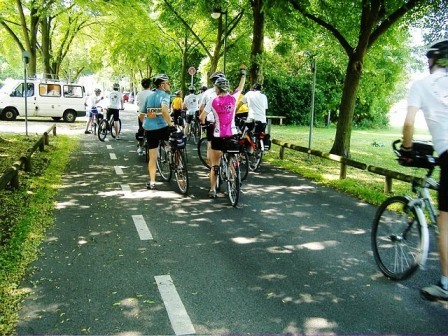 Early the next morning the German cyclists, who had travelled out by train to Aachen, arrived to meet us.  They escorted us back for the 46 miles to Rheinbach. About halfway there they laid on a wonderful picnic lunch in the middle of a forest clearing.

The arrival in Rheinbach was just a fantastic feeling !    We arrived about an hour before the bus so we had time to celebrate with some beer.

Once the bus with the other weekend guests had arrived from Sevenoaks we had a ceremony to present a UK standard blue cycling sign. The sign would be displayed in a prominent place in the town.  The day concluded with a hog roast party at a nearby restaurant especially for the cyclists.

The whole trip was a fantastic experience. The weather had stayed fine for most of the time. It had been great cycling along the quiet cycle tracks of Belgium and Germany. We had all got on together very well and the evenings in the bars and restaurants had been good fun.

Because of the mixed ability of the whole group, which was also split 6/4 Male/Female, the daily distances had not been vast. I hadn’t found the cycling particularly difficult at all. Perhaps that was because I had over trained myself. Even climbing in the Ardennes on the second to last day hadn’t  presented too much difficulty.

In the intervening two years the bike stayed in the garage.

Then almost two years later there was talk of doing it all over again…..

3 of the original 7 cycle club members decided to do a variant of the 2010 trip.  Myself and another “novice” cyclist from 2010 decided on a totally different plan. We would cycle to Rheinbach via Pontoise; the other Sevenoaks twin town near Paris.

This was a longer route and would involve greater daily distances. We would also have no support vehicle and so we would have to carry all our own gear on the bikes.   We were up for it though and we decided to do the ride for charity in aid of a local school.

One of the original group decided she would come with us to Pontoise and another decided he would escort the three of us to the ferry on the English side.

We would also meet the other 3 taking the direct route on the last night before Rheinbach. The 5 of us would then cycle the last day together. The Germans agreed they would cycle out to meet us for lunch and then escort us all into the town together.

The 4 of us started off early and cycled down to the ferry at Newhaven. We said good bye to our escort and then crossed on the Newhaven to Dieppe Ferry.

We arrived in the afternoon about 3pm. It was raining hard but we persevered and made Neufchatel before it was dark. We stayed in a hotel there drying out as best we could.

We cycled on from Neufchatel under clearer skies. We paused at Gisors for lunch. We arrived in Pontoise in the late afternoon. We stayed the night with our charming host family.

It might have been a bit early for a rest day but we had one anyway. We waived off our second companion as she headed back to the UK. We then spent time looking around the town and (even at this early stage) sending some laundry home. We enjoyed a couple more excellent home cooked meals with our hosts.

We set off from Pontoise bright and early the next morning and made our way through to Senlis for a lunch stop. We got lost in the Compiegne forest in the afternoon but managed to find our way eventually. After pausing at the Clearing of the Armistice, we cycled on to Noyon to stay in a little Etap hotel.

The cycling was good and the weather was fine. We headed up the towpath of a canal and then wondered afterwards, when we saw a sign, if we were actually allowed to do it. We stayed that night in Fourmie.

We climbed a lot on Day Six. We passed into Belgium and celebrated by having frites for lunch. The last part was all the way down a hill towards the picturesque town of Dinant and was definitely the best bit.

The hotel at Dinant was superb and located in an old monastery. We went out in the town to watch the Euro 2012 game on the TV (France 1  – England 1). The locals seemed to be supporting England.

The day was relatively easy.  Most of it consisted of cycling along the banks of the Meuse River.

We had lunch in Namur and then continued on to Liege. We lost the cycle path a few times but managed to find Liege in the end. We stayed at a hotel right in the city centre and dined that night in a brassiere nearby

This was to be the hardest climb. It began almost as soon as we were out of the Liege suburbs and it lasted all the way to the border with Germany. We paused for lunch in the last town in Belgium.  It was part of the small German speaking part of the country. It was quite an interesting experience speaking German in Belgium and it was a nice lunch too.

From there it was a nice roll down the hill into Germany and towards Aachen and the familiar site of the hotel we had stayed at two years before at Eschweiler. We met up with our English friends and spent the evening in the pub exchanging stories of our experiences.

The next morning we set off towards Zulpich (24 miles) where we would meet our German friends. We got there and had lunch with them before cycling for the last few miles into Rheinbach. We celebrated with a beer or two at the local brewery and waited for the bus to arrive from England.

Over the weekend we celebrated with lots of good beer and a visit to the Cathedral at Cologne.

The whole experience was great and it was even more enjoyable than the 2010 trip.

That said, I am not really a convert to cycling.

I still have the bike though.