I think most people, whatever their view on the outcome, would agree that the 2016 USA Presidential Election campaign was a little bit bizarre.  I was lucky enough to be in the USA in October towards the end of it all.  I found it all absolutely fascinating.

I managed to catch the final candidate debate live on TV and afterwards I talked to people at work, in bars and on aeroplanes about their impressions of it and how they intended to vote. I would be quite gentle with them and I would keep my own opinions to myself. I got to hear some very convincing arguments from both sides on why people were voting the way they were. 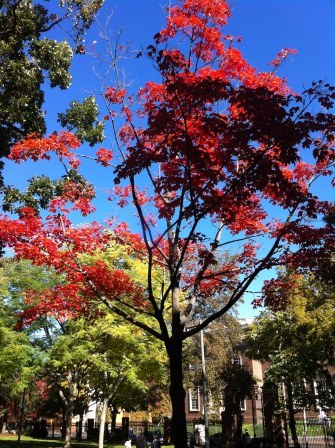 I ended my October trip in Boston. I took the chance of an enforced layover to walk around the city.   I have visited Boston a couple of times since my first trip there in 1986. I like it a lot not least for its history.

Walking around Boston it seems that almost every other building has had some important part to play in early American history.  Of course as it was autumn, or “fall”, many parts of the city were especially  beautiful.

With just a few weeks to go before the election it was quite an exciting atmosphere. There were posters everywhere and lots of campaigners were on the street. I was pleased to see that there were even quite a few people out there just trying to get people to register to vote.  One was even dressed in an 18th century costume.  I thought that was quite a clever way of reinforcing the history of the right to vote. 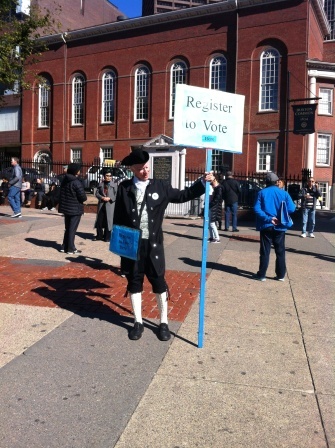 At lunch time I listened to a rally in favour of gun control that was being held on Boston Common. I just chanced upon it but I stayed in the crowd listening to the whole thing. It included speeches from Joe Kennedy and from Gabrielle Giffords, a former Arizona senator who was left brain damaged by a shooting attack, and it was very moving.

After the rally was done I caught a “T” train heading out of the centre. The “T” is Boston’s subway system and it is the second oldest, after New York, in the country.   It has been named “T” since the 1960’s but nobody seems to know why. There is also a “T” (Tunnelbana) in Stockholm and it is claimed that the signage was copied from there.

I love the idea of there being a connection between “T” for tunnel and the Boston Tea Party.  The modern smart card for the system is known as a “Charlie Card”. That name apparently comes from a 1940’s song about a man named Charlie who was forced to stay on the system as he never had enough money to get off. 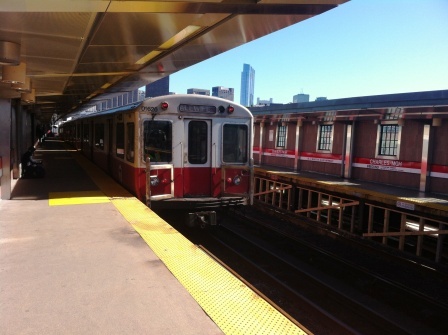 I got off the T at Harvard and wandered around the area near the university. It was quite a tranquil place to walk around and the autumn colours there were pretty amazing.

I browsed in some bookshops but I resisted the urge to buy one of the many books they had about the election.

I finished my day with a delicious meal in Boston’s north side Italian quarter.

I returned to the airport hotel on the T and had a final drink in the bar. The barman, who was obviously a Democrat, was having a bit of lighthearted banter with one of his customers who was a Trump supporter. I had an early flight back to Heathrow so I decided to leave them to their discussion and to leave America to its election.