In late June 2020 we finally completed the South Downs Way.

We had taken our time and spent three years walking the whole thing in nine distinct stages.

We loved every minute of it. 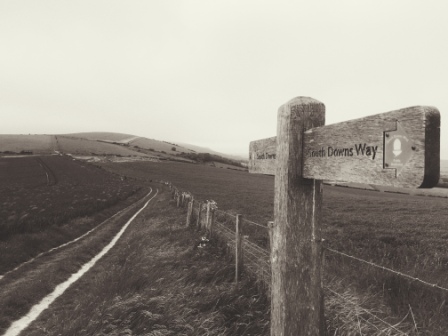 Walking only in spring or summer, we completed one stage every few months. We walked one way and used buses or trains for the other direction.

We often found that getting to the start or back from the end of each stage was more of a challenge than the walk itself. 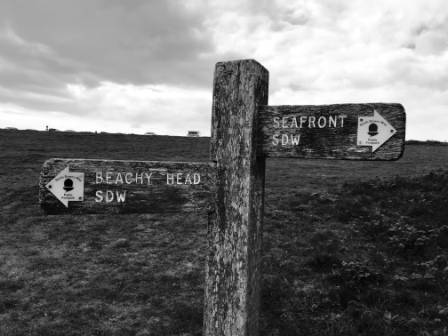 The South Downs Way is 100 miles long and stretches from the seaside resort of Eastbourne in the east to the ancient cathedral city of Winchester in the west.

It is one of 15 National Trails in England and Wales and is actually the only one that lies entirely within a National Park (South Downs National Park).

It combines some quintessential English downland scenery with dramatic coastlines.   For much of the distance the path is high on chalk ridges and affords spectacular views in all directions. 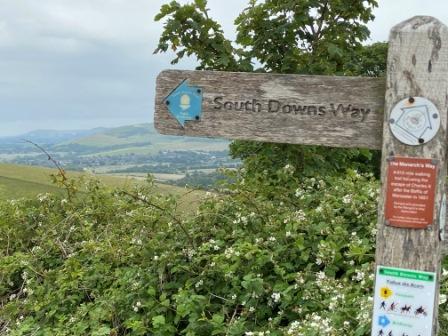 After completing the 153-mile North Downs Way in 2016 and then the 268-mile Pennine Way in 2018, we decided it would be our third National Trail.  We’d visited parts of it before, notably the cliff section around Beachy Head, but most of it was new to us. 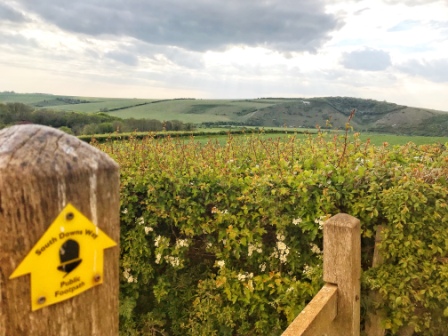 We only had limited spare time available so, rather than attempt it all at once; we chose to divide the walk into stages. This decision was made easier because the trail was a relatively short distance (60-90 minutes drive) from our home. 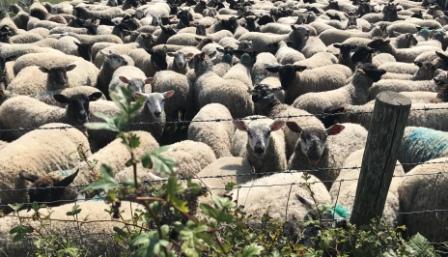 Nevertheless, I would certainly not argue against the idea of doing the whole thing in one go.   I have read some excellent blog accounts of people who have done just that and we met a few people who were in the middle of such trips on our own walks too. There are plenty of airbnb and other accommodation options available on the route. 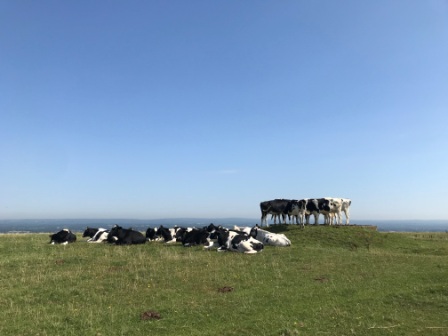 Dividing it all up

As the Eastbourne end was closest to our home we decided to start there and walk west to Winchester.  We then tried to identify about 8 sections of the route, between 10 and 15 miles each, that we could reach easily and walk comfortably in a day.

We wanted to avoid doing circular walks, so we were looking for sections where we could park at one end, walk one way (hopefully west) and make the opposite journey by public transport. 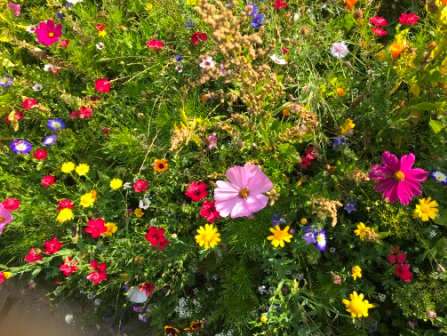 Finding these sections proved to be a little more difficult than we thought; particularly in the west where bus and train networks were relatively sparse.

In the end, we had 9 separate days out on the trail between 2018 and 2020; I have included an account of each one below. 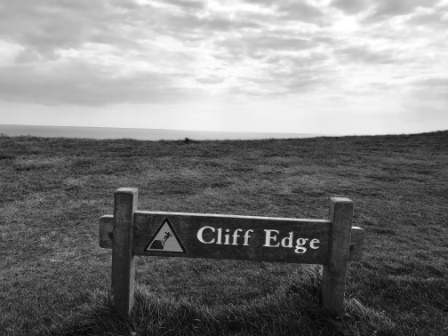 There are already a lot of excellent reports of the South Downs Way online, so I have concentrated here on providing more on how we accessed each section of our walk and less on the walk itself.

Should anyone be tempted to follow in our footsteps and attempt to walk in stages, I have added maps to show all the transport connections we used at the end.  There are links to transport providers too.

Finally, I have included some brief notes on the transportation we used for the North Downs Way, the “sister” trail, and on the path that joins them both together: the Downs Link.

Once we had decided that we would attempt the 10.5 miles from Eastbourne to Alfriston as our first one way leg, we started to look at options for getting out to Eastbourne or back from Alfriston. 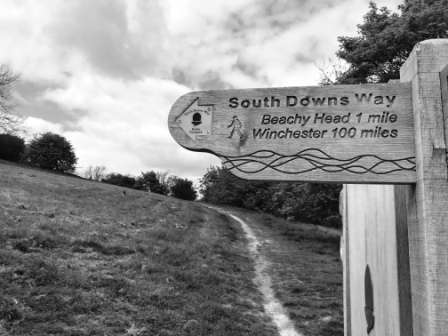 Unfortunately we had to reject the direct bus between both places because the times were unsuitable; we decided instead to walk a bit further on from Alfriston and then return by train from Berwick.

We drove down to Eastbourne and parked at the station.  The walk to the start of the trail was well signposted and took us about an hour.  The South Downs Way starts its 100-mile journey to Winchester on the western edge of Eastbourne.  To mark the spot there was a cafe, a union flag and a large signboard with information about the walk.

The first part of the walk took us up a steep path to Beachy Head.  This part, with its vertigo-inducing cliffs and candy stripe coloured lighthouse at the bottom of them, was already quite familiar.  We then continued to another lighthouse (now a private house)  at Belle Tout before descending down to Birling Gap. 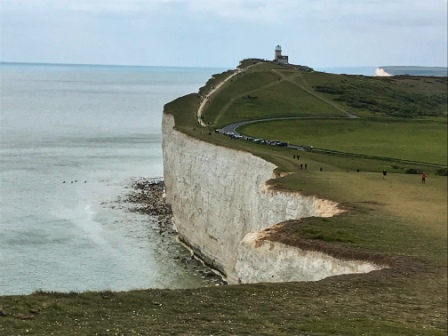 From Birling Gap we continued along the coast and joined hoards of people walking up and down a series of seven cliffs known as “the Seven Sisters”.  The constant climbing and descending made the walking pretty hard going.  Finally at Cuckmere Haven we headed inland and the crowds disappeared.

The South Downs Way now headed through secluded woods and took on a different character altogether. We passed through the village of Litlington and then walked along the banks of the River Cuckmere itself.  On the way into Alfriston we passed the Old Clergy House: the very first building ever purchased by the National Trust and the source of their famous leaf logo. 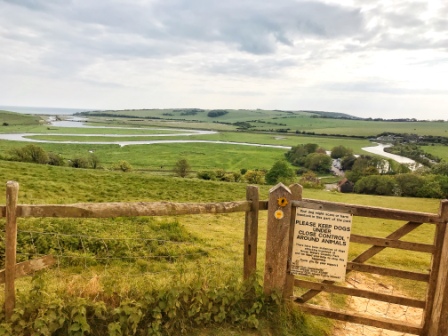 In Alfriston we had time for a quick pint in the Ye Olde Smugglers Inne to celebrate completing the first 10.5 miles of the South Downs Way.  Then we set off again, now heading off the trail, towards the nearest railhead at Berwick.

The majority of the 2-mile walk to Berwick station was on another named footpath: the Vanguard Way and it took us past the church at Berwick.  The interior was painted by Duncan Grant (a member of the “Bloomsbury Group“) and it was certainly worth stopping to have a look inside. 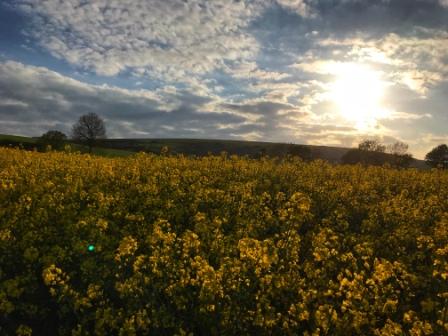 We timed things well and we reached Berwick just before the hourly train to Eastbourne was due.   After all the energy we had used walking the best part of 14 miles, it seemed almost disappointing to arrive back at the station car park in just 15 minutes. 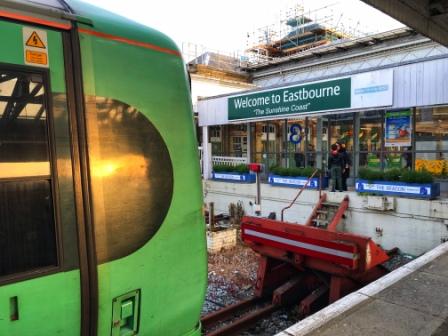 For our second section we drove back to Berwick and parked in the station car park there. Then we retraced our steps to Alfriston and had a lovely late breakfast sitting outside the Singing Kettle Café before recommencing on the South Downs Way itself.

After a bit of a stiff climb we spent the next few hours on the ridge top enjoying great views inland to the north and out to sea to the south. We passed by Firle Beacon and eventually came to Itford Hill before descending down to the River Ouse. 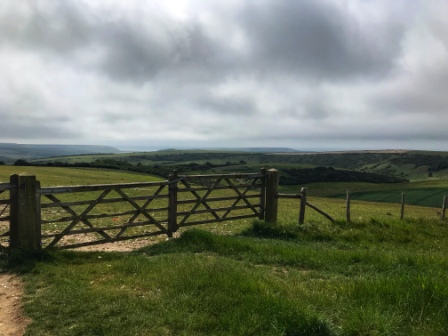 We passed by Southease station on the Seaford branch line, crossed the Ouse on the old swing bridge and then walked through the picturesque village of Southease itself. 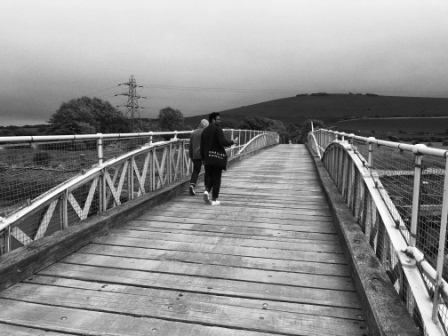 The final part of the walk took us back up on the escarpment again, with views of the outskirts of Lewes in the distance, and then down the “Jugg’s Road” descending to the A27 dual carriageway. 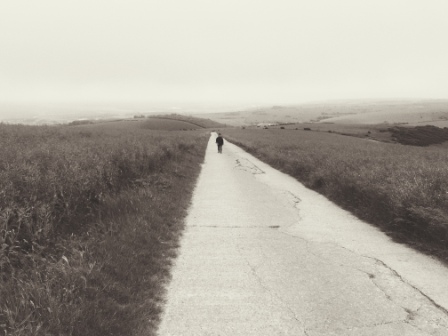 We left the South Downs Way at House Dean Farm and then, in what was certainly the worst part of the day, we walked for an extra mile and a half alongside the noisy and fast-moving A27.   We used the subway in front of Brighton University to cross the busy road and access Falmer Station. 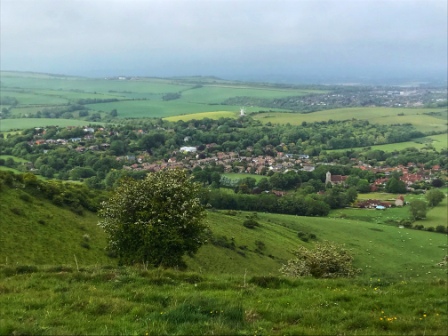 There were plenty of trains heading through Falmer but there was only one an hour to Berwick.  The direct journey was around 20 minutes; but we chose to change at Lewes and it took us almost an hour.

The car park at Falmer Station was only small so we counted ourselves lucky to find a place at the start of our third section.  We made our way back alongside the dreaded A27 to meet up with the South Downs Way again. 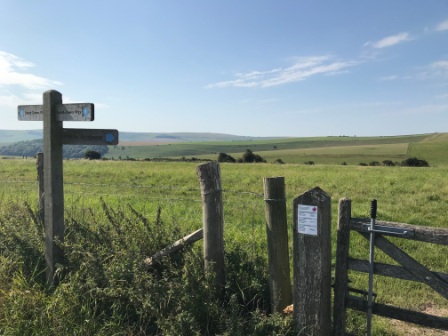 Soon we had left the dual carriageway behind and climbed to the crest of the hill at Blackcap. As we headed along the ridge top passing Ditchling Beacon, we left East Sussex behind and entered West Sussex. 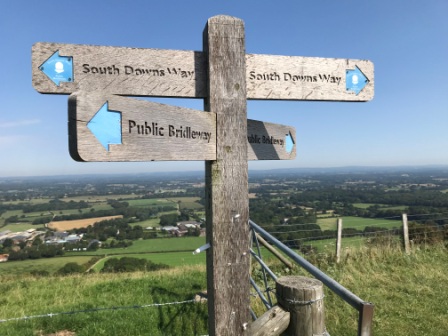 Eventually we came to the “Jack & Jill” Windmills: famous local landmarks that can be seen from miles around, and then began descending towards Pyecombe.  We passed through the village, crossed the busy A23 and then began another long climb on the other side.  We paused at the wonderful “Hiker’s Rest” café at Saddlescombe; where a cup of coffee and a slice of cake emboldened us for the final stretch to Devil’s Dyke.

Devil’s Dyke is a spectacular deep V-shaped valley.  It is easily accessed from the centre of nearby Brighton, so it is quite a popular tourist spot.  There is a pub too and as it was a sunny day when we visited it was incredibly busy both with walkers and motorists who had parked in the large car park alongside. 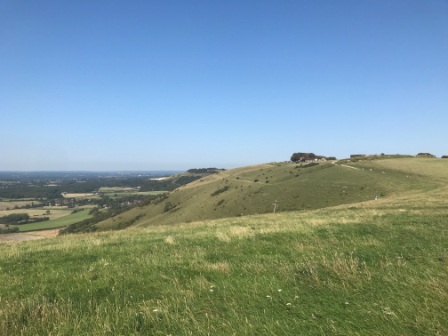 After enjoying a refreshing pint and admiring the view, we caught a No. 77 bus, operated by Brighton & Hove, down to Brighton Station (20 minutes).  From there we boarded one of the frequent (up to six an hour) trains an hour back out to Falmer (15 minutes).

Our overall strategy for accessing the whole walk had left us with just a short 4.5 mile stretch for our fourth section. We decided to make a change to the usual plan and complete it as a circular walk instead.  We drove to the car park at Upper Beeding and then walked east back to Devil’s Dyke and then simply returned the same way back. 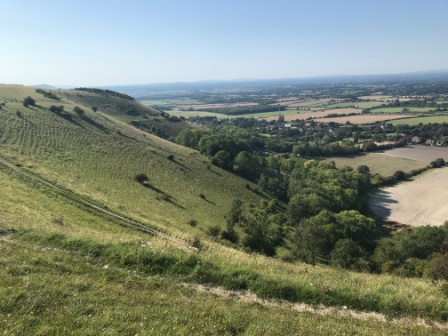 There were fantastic views in every direction all along this stretch, but the highlight was Fulking Hill, owned by the National Trust, with sad but highly predictable graffiti on its signs. 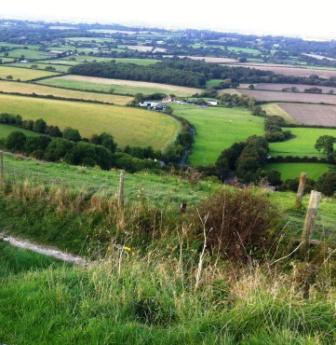 Heading west, descending towards Upper Beeding, there was also a magnificent vista of the Adur Valley in the distance. 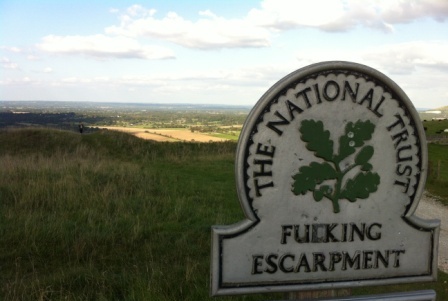 From now on we began to park at our intended destination for the day and then take public transport back to the start.  It made for a more relaxed walking experience as we didn’t have to hurry at the end to catch (increasingly less frequent) buses or trains.

We drove to Amberley station and bought tickets to Shoreham-by-Sea.  The whole journey took about 70 minutes, although that included a 30 minute wait at Ford where we changed trains. 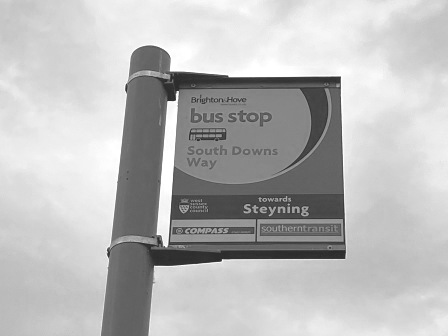 We had a quick snack and a drink in Shoreham before catching a No. 2 bus towards Steyning.   The bus journey took about 15 minutes out to the “South Downs Way” stop on the road to Steyning.   Almost two hours after we first arrived at Amberley station (just 13 miles west) we were finally ready to start the walk again! 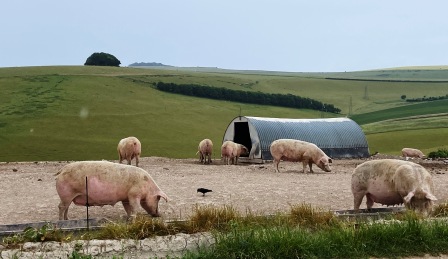 Compared with all the palaver it took to get to the start, the walk was pretty easy.   We started from the bridge over the River Adur, climbed gently up onto the downs and, except for a brief descent to cross the busy A24, stayed up on the escarpment for almost the whole walk.

The downs were quite exposed here but luckily the weather was calm.   The views in both directions were pretty magnificent.  The highlights included the Steyning Bowl, the great clump of trees at Chanctonbury Ring (near the prehistoric fort) and a walk past quite a large pig farm! 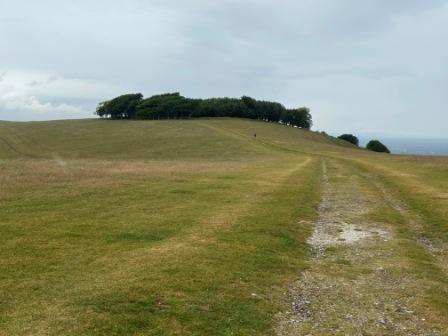 We started to notice a lot of the signposts on this section had little signs on them that enabled you to use a mobile phone QR scanner to find out more about the area you were walking through or to “meet” the farmer whose land it was. It was a nice idea but it felt just a little too high tech in such a beautiful natural setting. 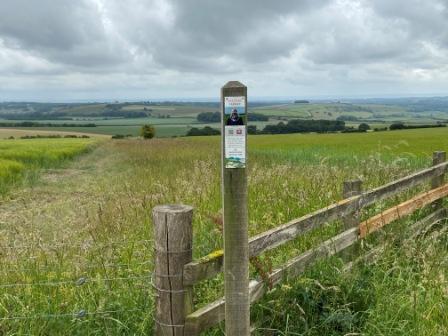 Eventually we reached Amberley and, just before we descended off the ridge top down to the station, we got a lovely view of the Arun valley with the river winding its way into the distance.

Chalk used to be extracted around here and as we approached the station we passed the Amberley Museum: an open-air attraction situated in a former quarry.  The museum aims to preserve the industrial heritage of the area; it is well worth a visit!