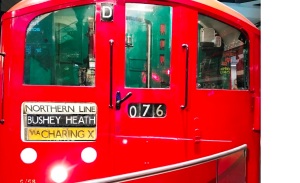 This walk starts at Finchley Central and offers a view of trains crossing the Dollis Hill viaduct on the Mill Hill East branch.  After Mill Hill East there is a relatively straightforward stroll along the old track bed before navigation becomes a bit more difficult nearer Edgware.  The walk ends at the site of the old LNER station there.

To start, get an Oyster / Travel Card that includes at least Zones 4-5 and get yourself to the north exit of Finchley Central (see walk 3 for more details of the station).

Although the whole Finsbury Park to Edgware line was built as a double track formation back in 1867, initially only a single track was laid.

When the High Barnet branch opened 1872 it turned out to be the larger generator of traffic. The whole line was then doubled except for the Finchley to Edgware part.  Even by 1930 this last part of the line had not managed to stimulate any housing development along its path (clear from the map below).

After High Barnet opened, the Edgware service was reduced mostly to a shuttle connecting in and out of the High Barnet trains at Finchley.

Under the Northern Heights plan the line was finally to have been doubled; work on laying the extra track began in 1938. The whole Finchley Central to Edgware section  was closed for electrification work in September 1939.

In May 1941, the line was reopened (after being electrified) but only as far as Mill Hill East.  When the Northern Heights plan was cancelled after the war, passenger services were never restored beyond Mill Hill East.

BR freight trains continued to use the line between Edgware and Finsbury Park until 1964.   The track between Mill Hill East and Edgware was lifted soon afterwards.

We will now walk from Finchley to Edgware. First alongside the Mill Hill East branch and later along some of the old track bed.

Exit Finchley Central, cross over Ballards Lane to Nether Street.  Follow Nether Street until it begins to curve to the right. Turn left into Dollis Road and then follow it under the Dollis Brook Viaduct. The structure, which has 13 arches, still carries the trains of the Mill Hill East branch and is the highest point above ground on the London Underground. 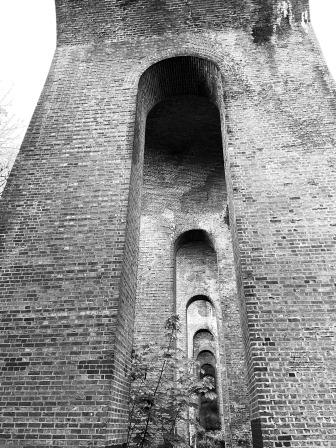 As soon as you have passed under the viaduct, turn right into Abercorn Road, and follow it to the end. Turn left into Frith Lane, and soon afterwards turn right into Bittacy Hill.  Pass under the railway once more and soon Mill Hill East is visible on the left. (1.02 miles)

Mill Hill East (1867) would have enjoyed a greatly enhanced service had the Northern Heights plan been implemented.  7 trains an hour would have arrived from Finchley Central having travelled on the new tube line via Archway. They would have gone forward to Edgware and on to the new terminus at Bushey Heath. 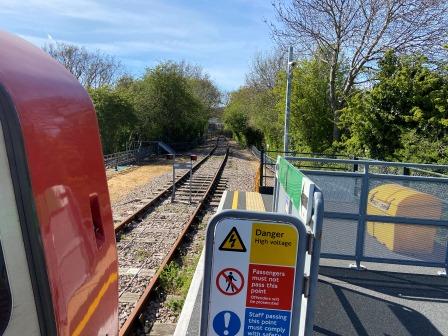 Unlike the rest of the Edgware line, the short section from Finchley Central to Mill Hill East was reopened in May 1941.  The proximity of the station to Inglis Barracks, headquarters of the Middlesex Regiment, saved it.   The army left the area in the 1960s but the land that the barracks used to occupy has now been redeveloped for housing, helping to sustain the station today.

When the Northern Heights plan was cancelled after the war the station became the permanent terminus of the Mill Hill East branch. Today the service is provided by a shuttle train running from Finchley Central approximately every 15 minutes, although there are through trains to the rest of the line at peak times. Mill Hill East is the least used station on the Northern line.

Mill Hill East retains its original Victorian building and together with Finchley Central, the attractive little station is one of the oldest still in use as a tube station in London.

Continue walking along Bittacy Hill for a short distance before turning left into Sanders Lane. At the end of Sanders Lane take the footpath that leads off to the right and follow it down to the old track bed. 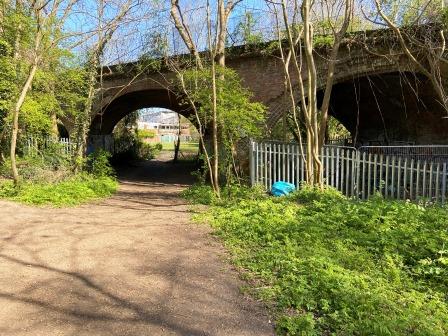 The route now follows the “Railway Walk” for more than half a mile until it reaches Page Street. The path is very quiet and pleasant to walk on.

This stretch of line was another early candidate for the site of a train depot.  The plan was abandoned due to lack of space.

After Page Street, the route further west is blocked by a  modern housing estate. Cross Page Street and locate a footpath just to the left and then follow it until it emerges in Rowlands Close.  Walk along Rowlands Close until its junction with Bunns Lane.

Turn left into Bunns Lane and follow it as it winds its way under Watford Way, the M1 and the Midland Main line railway.  After the railway bridge continue to follow Bunns Lane as it curves to the right at the roundabout.

After passing two large office blocks on the right and with Lyndhurst Park on the left,  the road crosses the remains of a railway bridge.  This was site of Mill Hill (The Hale), and the station was located on the right-hand side of the bridge. Looking over the bridge parapet today, nothing is visible except thick undergrowth.  (3miles).

Mill Hill (The Hale)  (1906-1939 / Link to Disused Stations ) would have enjoyed the same level of service as Mill Hill East had the Northern Heights plan been completed.

The station, opened a long time after the line itself, was adjacent to the Midland Railway’s Mill Hill (now Mill Hill Broadway).  The GNR line went under the Midland line just south of here.

There had been earlier ideas of linking the two lines here, but as part of the Northern Heights plan these two adjacent stations would have been provided with a new combined entrance building with a shared forecourt.

By 1939 work on laying the second track between Finchley Central junction and here was quite advanced.  The original station platform had also been extended with concrete and a second one constructed.

The station was closed in September 1939 but never reopened.  It was lost for ever when the Edgware to Mill Hill East section of the Northern Heights plan was abandoned after the war.  The platforms and station buildings were soon demolished, and the track removed after the last goods train passed by in 1964.  The site was covered by material excavated for the construction of the nearby M1 motorway.

Cross Bunns Lane and enter Lyndhurst Park.  Walk through the park along its northern edge. The old track bed can be accessed here along to the right, but it is covered in thick undergrowth.

Before the exit  of Lyndhurst park there is a gate through which the next part of the track bed can be accessed at limited times.  It is part of a local nature reserve and is normally open on Saturday and Sunday 10am-4pm.   If the gate is closed, a diversion is possible via the Meads and Dryfield Road.

The track bed walk ends at Deans Lane.  The course of the old LNER line continues onto the other side of Deans Lane as an access road to the London Underground Depot.  Further on, the bridge which carried it over the Edgware branch of the Northern Line is still extant but is not accessible.

On the other side of this bridge the course of the railway into the old LNER station has been obliterated by modern development. The OS map from 1937 below shows the relative positions of the LNER and LPTB (Underground) railways.

Turn right into Deans Lane and after a short distance turn left into Westway.  Follow Westway until its end and then follow a footpath across a stream that eventually leads into Brook Avenue.  The chord which would have linked the LNER line (shown in green on the map above) would have just been to the left here.

Walk down Brook Avenue, a street of typical late 1920s houses that the arrival of the Underground in 1924 encouraged, until a small passageway (Bakery Lane) heads off to the left.  Follow this passageway past the Underground sidings until it emerges onto Station Road.  Turn left here and the Edgware Underground station (2) is just on the left.

Keep walking a bit further along Station Road passing the Boardwalk Shopping Centre.  The LNER station (1) used to be located  a little further along here on the left (4.5 miles).

Under the Northern Heights plan, Edgware LNER (1867-1939 / Link to Disused Stations) would have closed to passengers once the line from Finchley Central had been diverted via the new chord into the newly expanded LPTB station.

The station did close almost as planned when services from Finchley were discontinued in September 1939 for electrification work.  However, the enlargement of Edgware LPTB station was soon abandoned due to the war and construction of the linking chord was halted as well.

Thought was then briefly given to electrifying the line from Finchley Central to Edgware LNER and reopening it on a temporary basis until after the war.   This idea was soon abandoned and as we have already seen the electrification only ever reached Mill Hill East.

After the war, the chord was never built and the line between Mill Hill East and Edgware was never reopened to passengers  again.  The goods yard at the LNER station did remain open though and British Railways freight trains used the line as far as Finsbury Park (including the London Transport section from Mill Hill East to East Finchley) until 1964. 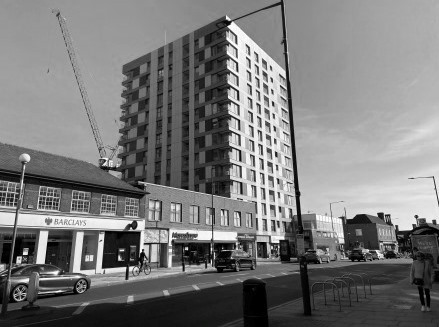 Nothing remains of the station today, a tall building and the Broadwalk shopping centre car park behind it now cover the site.

A little further on (see “3” on the OS map above) is the impressive Railway Hotel.  It was built in the early 1930s in “Mock Tudor” style and is now Grade II listed.  There have been several campaigns to ensure that it is not demolished; it is now awaiting restoration.

On the opposite side of the road is St Margaret’s church, one of Edgware’s oldest buildings. It is worth a look around if it is open.

More information on the Northern Heights