This journey starts with a book. When I was fourteen years old and quite ill in bed at home my mother returned from the library with a few non-fiction volumes aimed at trying to cheer me up. One of them was John Maxtone-Graham’s “The Only Way to Cross” (1972). It had a lovely painting of RMS Mauretania (1907) on its cover and it told the story of the golden age of the Trans-Atlantic Liners.

The book captured the magic of the voyages, the lavish luxury, nationalistic rivalries, the dreams of the immigrants and the snobberies of the socialites in the days of elite travel. It was absorbing and full of little details that drew me in. I read it from cover to cover and I was hooked. It kindled a life-long interest in those big ships that used to link Europe and America in the early 20th Century before the jetliners came along and took all their business away.

I borrowed the book from the local library several more times and now I have my own collection of more than 50 books on the same basic subject. For me the subject is quite a specific one; I have never really been that interested in ships in general, yet those that plied back and forth across the North Atlantic absolutely fascinated me.

I am not sure quite why that is. Perhaps it was because they were always the largest and fastest ships in the world, but probably it was because I dreamed about being on them. I would be young, rich, successful, probably in love and on my way to New York. I suppose I just loved the romance of it all.

In August 1986, after crossing the USA by Bus and Train, I arrived in Long Beach, California. RMS Queen Mary (1936) had retired there in 1967 to be a tourist attraction and a hotel. She turned out to be one of the highlights of my first visit to the US. I was first in line when the doors opened at 9am and last off at 5pm. I spent the whole day touring and re-touring the ship. I was absorbed by the wonderful Art Deco fittings and the gorgeous decorations of the first class public rooms. I was fascinated by the behind-the-scenes tours of the engine rooms and the swimming pool.

I have been lucky enough to re-visit RMS Queen Mary several times since then. I have spent a total of 8 nights (on 5 different occasions) in some of the original first class staterooms that now form part of the hotel. I have had many happy evenings listening to jazz until the early hours in the wonderful observation Lounge overlooking the bow of the ship.

Armed with the 1936 deck plans, I have even been known to go a bit off limits after midnight rummaging around in areas I probably shouldn’t be in. Whatever I have been up to before bed I always walk around the decks alone at night. I always stand there wondering what it would have been like to have been on the North Atlantic in the late 1930’s pitching and rolling. 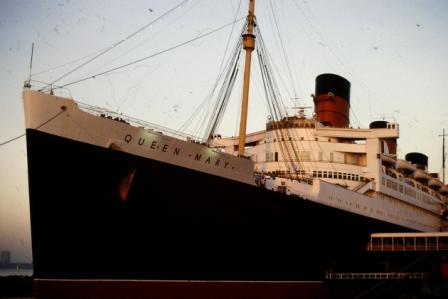 There is also another ship that I have often wondered about. She is one of RMS Queen Mary’s immediate predecessors; RMS Olympic. RMS Olympic was slightly slower than her competitors but she was the first real “floating palace” liner. She introduced amenities such as a swimming pool, a sauna, an a la Carte restaurant, a resident band and a winter garden.

She served on the Southampton to New York Route from 1911 until 1935 only taking a break to be a troopship in WW1. She made 500 return crossings and earned herself the nickname “Old Reliable”.

Sadly, Olympic is long gone. She was scrapped at Jarrow, Northumberland in 1935. Yet part of her does remain. The fixtures and fittings from the first class lounge and other public areas were purchased by the proprietor of the nearby White Swan Hotel at Alnwick and survive today. Earlier this year my wife and I walked through the revolving door of the old first class restaurant and sat down to breakfast in the beautiful dining room exclusively panelled by the original 1911 woodwork.

The room is simply stunning and I sat there wondering what it would have been like to eat my bacon and sausages surrounded by all that lovely wood actually out there on the Atlantic Ocean. 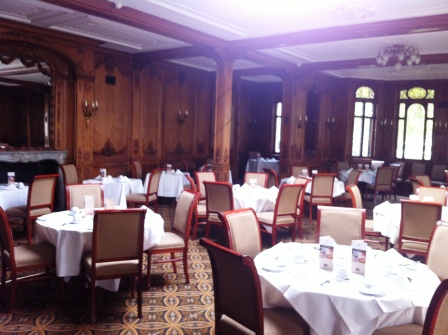 A real Atlantic crossing has long been on my bucket list. But I needed the romance too. I needed the girl on my arm. It took me almost 20 years to persuade my wife to come with me. “We will do it when we are over 60” she used to say.

I pushed a bit harder and she changed to “We will do it when we are over 55”.   By chance, we made friends with a local couple who had made the voyage several times themselves and had loved it. This helped my arguments and in the end my wife gave in. Eventually she agreed that we would do it the very year we became 50.

Finally, we were both 50 this year.

Your ship leaves Southampton on the southern English Coast. She heads out into the English Channel and passes the Isles of Scilly. As she heads south-westerly along the Irish coast she passes Fastnet Rock. Fastnet is also known as the “Teardrop of Ireland” as it was often the last point Irish emigrants to the new world saw of their homeland. From that point on the Atlantic Ocean stretches out to the western horizon and far,far beyond.

The great circle route to America starts there at Fastnet. It arcs across the curvature of the earth for nearly 3,000 miles. It is one of the most troublesome ocean voyages in the world. The ship is alone. There is no land. There are no islands. There is only ocean.

Over its entire course the great circle route veers from Fifty Three to Forty Degrees latitude and wind and weather gust and rotate across the Ocean. The weather is typically unsettled with odd and sudden shifts of pressure, wind speed and direction. 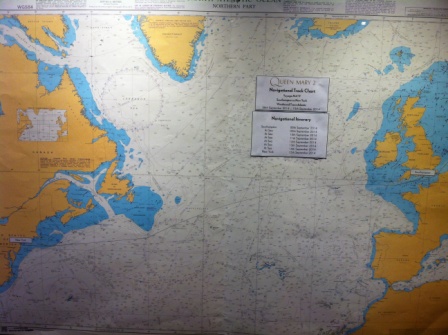 2,000 miles from Europe your ship hits the most dangerous part of the voyage off Newfoundland. There are frequent mists, fogs, driving rain and, of course, in winter, icebergs. Finally she passes the Ambrose Light and picks up her pilot at Sandy Hook. She then sails up the Ambrose Channel and into the magnificent beauty of New York Harbour passing the Statue of Liberty on the way to her berth.

The prevailing winds on the North Atlantic come from the west and thus fight any westbound ship. In the days of sail a westbound crossing could take 45 days. In 1840 steam brought it down to 14. Progressively the journey was reduced to 7 days by 1900. With steam turbine propulsion RMS Mauretania introduced regular 6 day crossings in 1907. Queen Mary made the last big leap to 5 days in 1936.

The North Atlantic is amongst the most unforgiving and brutal oceans in the world. It can be totally calm at one moment but incredibly rough the next.

Undertaken by almost all European Immigrants to the USA and Canada, crossing it is simply one of the great historic journeys in the world.

Although some Cruise Ships do make some occasional slower North Atlantic Crossings to reposition between Caribbean and Mediterranean, the only regular service is operated by Cunard with their giant vessel; RMS Queen Mary 2.  Cunard have operated the route since the dawn of steam ships and celebrate the 175th anniversary of their first ship Britannia – in 2015.

RMS Queen Mary 2 was conceived as a successor to the QE2 (1969). She entered service in 2004 and is now the last remaining true Ocean Liner in the world. Using 40% more steel than a cruise liner of equivalent size, she has an incredibly strong hull that is purpose built for Winter North Atlantic conditions. With a maximum speed of 28 to 30 knots, she is currently the fastest merchant ship in the world.

She is also an incredibly stable ship. When Hurricane Sandy hit New York QM2 was in the harbour. Cruise ships hove to or slowed to less than 5 knots. QM2 left New York, set a course for Southampton and headed off at full speed almost directly into the storm. 7 days later, she arrived in Southampton on schedule.

When she entered service on the North Atlantic Route in 2004 she made 6-night crossings. In 2010, to save fuel, she was slowed down to do 7-night crossings.   Between May and January each year she crosses the Atlantic at least once a month and still offers the traditional “Southampton to New York” experience.

The plan was to try and re-create, as far as possible, the “classic” Trans-Atlantic crossing from the heyday of the great liners.

Ideally I would have liked to have made the journey in winter when the ocean might be even more interesting. I suggested the November crossing, but my wife would not have it and I was not in a position to argue.

Finally in April I booked the crossing departing Southampton on September 8th 2014.

The day finally arrived. With bags packed, we made our way to Otford Station and waited for the 11:02 train. We caught that train, changed at Sevenoaks and arrived at London Waterloo just before noon.

I have divided the voyage up into separate accounts of 7 X 24 hour periods.

The accounts follow on from each other – starting with Day One.

Just for a little bit of fun I have set out to compare our modest little trip with the maiden voyages of the RMS Olympic in 1911 and RMS Queen Mary in 1936.

This is a little pointless, of course, as the voyages were all quite different.

In 1911 RMS Olympic picked up passengers and mails from tender ships in Cherbourg before crossing to Ireland to take on more passengers (Irish emigrants mainly) at Queenstown near Cork.

In 1936 RMS Queen Mary headed directly from Cherbourg into the Atlantic.

In 2014 QM2 just set a course straight from Southampton to New York. Thus the mileages for Day 1 are all over the place and not really worth any comparison at all.

The 1911 and 1936 crossings followed the more southern “Winter Track” routes to avoid the ice around Newfoundland. In 2014 we were on the shorter more northern route saving 120 miles or more. In the days before Satellites RMS Olympic put her clocks back 42 or 43 minutes each night of the seven nights. We did 5 separate hourly changes and that will confuse the daily mileage comparisons even more.

* The Newfoundland winter of 1911/12 was milder than usual. Ice melted faster and some bergs broke loose. They drifted much further south than normal. Some 9 months after RMS Olympic’s triumphant maiden voyage her identical twin sister (built to the same set of drawings) left Southampton on her own first crossing. With the same Captain and many of the same crew (transferred for their experience) she followed roughly the same course at the same speed as her sister. On her fifth night out of Southampton at 49W°(41°N) she met up with some of that ice and sadly became the most famous Trans-Atlantic liner of all.